On Wednesday, the eve of the 2018 Canadian Premier Yearling Sale, Woodbine Racetrack hosted the 6th renewal of "Canadian Millions Night", a series of 6 stakes races restricted to Canadian-breds who went through the Woodbine sales ring as a yearling. The race night is co-sponsored by Ontario Lottery and Gaming (OLG) with purses worth a combined $750,000. Despite some occasional mist, conditions were excellent with partly cloudy skies, a light breeze, and temperatures in the mid 70's, with the main Tapeta track fast and dry, and the E.P. Taylor Turf Course rated good with the temporary rail set out in lane 4 (45 feet out).

The $175,000 OLG Simcoe Stakes Presented by Samuel, Son and Co. Limited featured a field of ten 2-year-old males sprinting 6 1/2 furlongs on the Tapeta main track. Clarendon Stakes fourth place finisher Souper Hot was the 5-4 favorite over 4-1 In Gus We Trust and 9-2 Moon Magic. Jockey Jesse Campbell sent 23-1 White Wedding to the lead exiting the chute through fractions of 23.58 and 47.47 while pressed by 10-1 The Newfie Express and stalked by Souper Hot. Turning for home White Wedding continued to lead but tired inside the 1/8 pole. 15-2 fourth choice Blessed Two, last early under Gary Boulanger, came out 3 wide for room and rallied to win by a head over The Newfie Express in 1:19.99. It was another 1 3/4 length back to 28-1 Seguimi third, and a head back to favorite Souper Hot fourth. 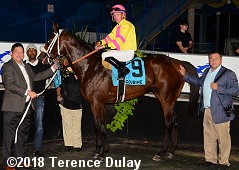 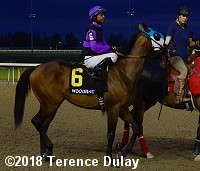 Left: Blessed Two in the winner's circle. Winning owner Derek Chin said, "We were kind of worried. What happened to the horse? But I'm in the clouds right now. Fantastic."

Right: Fourth place finisher and beaten favorite Souper Hot in the post parade. The Mike Mattine trainee has a record of 1 win, 0 seconds, and 0 thirds in 3 starts, earning $33.196 for owners Carlo D'Amato and Stacey Van Camp. 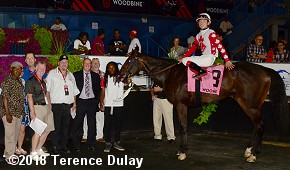 The $175,000 OLG Muskoka Stakes Presented by Ballycroy Training Centre featured a full field of 14 two-year-old fillies sprinting 6 1/2 furlongs on Tapeta. First time starter Silent Mistake was the 3-1 favorite over 5-1 Sailing By and 6-1 Deed's Legacy. 13-2 Moksgmol and 7-1 Ka Gee Gee dueled for the lead exiting the chute through fractions of 22.80 and 46.15, while stalked by Silent Mistake. Turning for home, Silent Mistake gained a short lead through 3/4 in 1:12.10, but 13-2 Speedy Soup, 13th early under apprentice rider Kazushi Kimuma, circled the field 6 wide, taking over inside the 1/8 pole and drawing off to win by 4 lengths over 17-1 Preferred Guest in 1:18.53. It was a head back to favorite Silent Mistake third.

Winning trainer Andrew Smith said, "This is a very nice filly. I'm very impressed with her. She's done everything right all along and I think she'll improve. I don't think it was (apprentice Kimura)'s fault (last out), two riders went to the same hole and there was a bit of a collision. He recovered, and he rode her well and won with her. We stuck with him. He's a good rider and he's going to be a great rider." 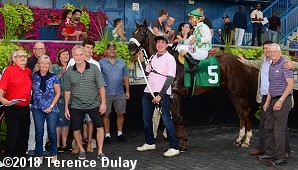 Kicking off the stakes action on Wednesday, a field of 6 older horses contested the $100,000 OLG Halton Stakes Presented by Tipperary Equestrian at about 1 1/2 miles on the turf. Nijinsky (G2) third place finisher Johnny Bear was the 1-2 favorite over 4-1 King and His Court and 9-2 Eminent Force. Jockey Jesse Campbell sent Eminent Force to lead through fractions of 25.51, 50.97, 1:15.27, 1:39.78, and 2:04.14 while pressed by 20-1 Ethical Funds and stalked by 17-2 English Illusion. At the top of the lane, jockey Rafael Hernandez sent English Illusion to the front through 11f in 2:17.97. Kept to task by Hernandez, English Illusion drew off to win by 1 1/2 lengths over favorite Johnny Bear in 2:29.72, just 34/100 second off the course record for the about distance. It was a long 6 1/2 lengths back to King and His Court third. Jockey Luis Contreras aboard Johnny Bear claimed foul against Hernandez for interference in the stretch but the claim was disallowed by the stewards.

Winning owner Dave Robinson said, "That's was amazing! We've been waiting for three years to run in a race like that. It was incredible."


The $100,000 OLG Kenora Stakes Presented by HBPA of Ontario featured just 4 older horses sprinting 6 furlongs. Defending champion and 2017 Horse of the Year Pink Lloyd was sent off at prohibitive odds of 15-100, over 5-1 Jacks Escarpment, 10-1 Circle of Friends, and 12-1 The Young Lord. Jockey Patrick Husbands sent Circle of Friends to the lead and he set fractions of 23.87 and 47.15, while Pink Lloyd sat back in 4th early on. Entering the stretch Circle of Friends was clear by 4 lengths, and had a 2 1/2 length advantage over the late closing Pink Lloyd through 5f in 58.77. Pink Lloyd and jockey Eurico Rosa da Silva closed strong in the final furlong to get up by a neck in 1:10.75. It was another 2 3/4 lengths back to Jacks Escarpment third.

Winning owner Frank DiGiulio Jr. said, "He was by Old Forester, who we were fans of, and he was a nice-looking horse. Bob (Tiller) really liked his conformation and he was one of the ones on our list. Luckily, he stopped at $30,000 and was in our price range and we ended up owning him. He made up a lot of ground in the last few jumps. Given the fractions, it's tough to close off those fractions. It just shows how good he is." 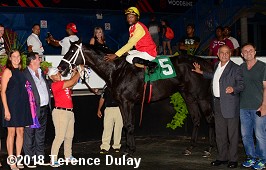 The $100,000 OLG Elgin Stakes Presented by Ontario Racing Thoroughbred Improvement Program featured a short field of 4 older horses (after 2 scratches) going 1 1/16 miles on Tapeta. Three time defending champion and Seagram Cup (G3) third place finisher Melmich was sent off as the 9-10 favorite over 3-2 Kingsport, 7-2 Thor's Rocket, and 17-1 Spirit of Caledon. Jockey Patrick Husbands sent Kingsport to the lead first tim by through slow fractions of 28.32, 53.63, and 1:17.34 while pressed by Thor's Rocket and stalked by Melmich. Turning for home, Kingsport opened up a 2 1/2 length lead through 1 mile in 1:40.85. Kept to task by Husbands, Kingsport cruised to a 1 1/2 length win over Melmich in 1:47.08. It was another 1 1/2 lengths back to Thor's Rocket third.

Winning jockey Patrick Husbands said, "He likes to go long and he likes to go short — but the older he gets, he likes to run at horses. Today, he had everything his way and when I got by the half-mile, I set him down and I knew it would take a good horse to beat him from there. I had everything my way and he was just galloping. Tonight, the track was a little bit slow, but he was just cantering out there and it's tough to let a good horse like that get everything his way and then try to catch him. He's the type of horse all his life that does not switch leads. You have to make him switch leads and today's the first day I ever rode him that he switched to his right lead on his own." 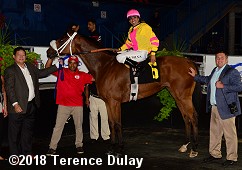 Closing out the Wednesday night card at 10:20pm was the $100,000 OLG Algoma Stakes Presented by Woodbine Entertainment featuring a field of 8 older fillies and mares going 1 1/16 miles. Zadracarta Stakes 6th place finisher Sparkles' Girl was sent off as the 5-2 favorite over 4-1 Fresh Princess and 9-2 Miss Sea. Jockey Emma-Jayne Wilson sent Sparkles' Girl to the lead first time by through fractions of 25.98, 51.01, and 1:14.98 while pressed by 7-1 Sugar Jones and stalked by Miss Sea. Sparkles' Girl continued to lead into the stretch through 1 mile in 1:39.88 but tired late. 11-2 Trini Brewnette, last early under Eurico Rosa da Silva, came out 4 wide for the driv and rallied to win by 1 3/4 lengths over 20-1 Bear Paw in 1:46.27. It was another 1 1/4 lengths back to Fresh Princess third, and a head more to Sparkles' Girl fourth.

Winning owner Derek Chin said, "She looked good. The groom told me she was working very well. When you get that kind of ride and don't get into trouble at the top of the stretch, I thought she'd come home. You put me in a sale and I'll probably buy something. And now even better after tonight."