The final Saturday of the 2017 Saratoga meeting featured four graded stakes contested before 32,202 fans. It was cloudy most of the afternoon with temperatures in the high 60's and the main track rated fast and turf courses firm.

The highlight race on closing weekend is the $600,000 Woodward Stakes (G1). It is the major local prep for the Jockey Club Gold Cup (G1) and ultimately the Breeders' Cup Classic (G1), for older horses going 1 1/8 miles over the main track. A field of 5 faced the starter with Dubai World Cup (G1) runner-up and Stephen Foster (G1) winner Gun Runner sent off as the 3-10 favorite exiting his win in the Whitney (G1). In to challenge him included 7-2 second choice Rally Cry, winner of the Alydar, and 6-1 third choice Neolithic, third in both the Pegasus World Cup (G1) and Dubai World Cup (G1). 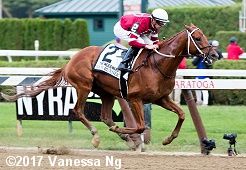 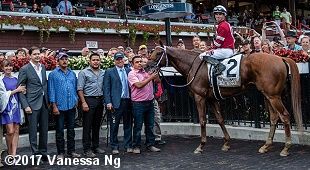 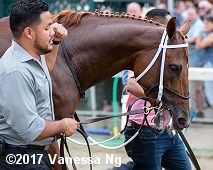 Left: Gun Runner in the winner's circle. Winning trainer Steve Asmussen said, "He stepped up. He was carrying everybody, all of us under these circumstances. We all know what's happened over the past couple of weeks. This was our last race heading into the Breeders' Cup and I thought it went as well as we could have hoped. If we can get out to California in good shape we'll hope to finish off the year. He increased his margin to the wire and proved his worth. The game plan was to leave him in Florent's hands. We worked him off many a horse in the mornings, knowing that he's very comfortable in that position, but with Todd having two talented horses in there, you did expect him to send one. It was expected and Gun Runner handled it like he's supposed to and, with his experience at this level, proved dominant."

Right: Gun Runner heads back to the barn after the race. 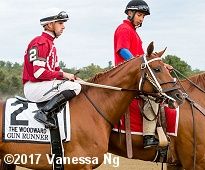 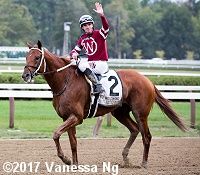 Left: Gun Runner in the post parade. Winning jockey Florent Geroux said, "I kind of expected one of (the two entries by Pletcher) to go, I didn't know which one. My horse broke so sharp I could pretty much do anything I wanted with him, he broke beautifully and from there when he starts leading on his left foot he is very strong. From the 3/8 pole I just knew it was a matter of how many lengths I am going to win. I was just hanging on. That is it. That was better than the Whitney. Stronger. Faster. Overall, he is just getting better and that was four weeks and he is doing good on the track. And I don't think he is 100 percent cranked up yet. I really do think he has another step forward with him. 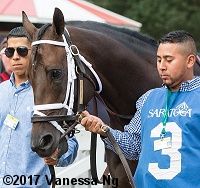 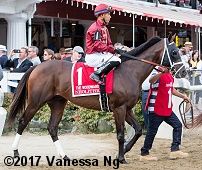 Left: Second place finisher Rally Cry in the paddock before the race. Todd Pletcher said, "Gun Runner is really good. He keeps putting big performances together one after another. We knew we couldn't just follow Gun Runner around there. That wasn't going to work. We tried that before. I thought Rally Cry got in a good rhythm and fought on hard for second. The winner was just too good."

Right: Third place finisher Neolithic heads out to the track after the race. Trainer Todd Pletcher said, "We thought to go ahead and let Neolithic run to the first turn and Gun Runner was aggressive to secure his spot."

The $350,000 Spinaway Stakes (G1) is the premier race at Saratoga for 2-year-old fillies, contested at 7 furlongs on the main track, and is a Breeders' Cup Challenge Series "Win and You're In"qualifier for the Juvenile Fillies. Separationofpowers was sent off as the 3-5 choice in the field of 5 off her 11 3/4 length debut win on July 30. In to challenge her included 2-1 second choice Pure Silver, undefeated in 3 starts including the Lynbrook Stakes and the Adirondack (G2), and 5-1 third choice Lady Ivanka, an 8 length debut winner of August 9.

Pure Silver was quickest away through an opening quarter of 22.36 before Separation of Powers took over on the far turn through a half in 45.30 wbile pressed by Pure Silver and stalked by Lady Ivanka. Entering the lane, jockey Irad Ortiz Jr. sent Lady Ivanka to the lead through 3/4 in 1:10.83. 12-1 Maya Malibu put in a late rally from 4th but Lady Ivanka held her off by 3/4 length in 1:24.97. It was another 3 1/4 lengths back to Separationofpowers third. 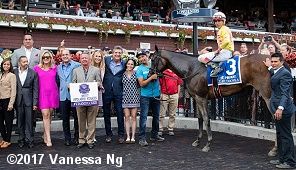 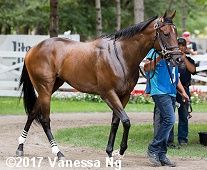 Left: Lady Ivanka in the winner's circle. Winning trainer Rudy Rodriguez said, "It was a tough test but we got it down. She ran a good race the race set up ran the way we expected, I was a little concerned about the inside horse, but we got it done. I was not confident at all turning for home because I saw that the other horse was coming on the inside, and Javier is one of the best riders in the country, they opened the rail for him, and I was concerned, but thank God we held on. I was hoping that he would wait a little longer, but I'm not on top here, so I thought if he waited a little longer maybe we could wait for whatever they were going to do, but thank God it worked out."

Right: Lady Ivanka in the paddock. Winning jockey Irad Ortiz Jr. said, "I got a perfect trip. I broke out of there and just sat there and waited. We were clear on the turn and when I asked her she was there for me. She was ready. Rudy did a good job with her. Her last race was impressive and she did it in a good way. Now here we are in a Grade 1 and she did it." 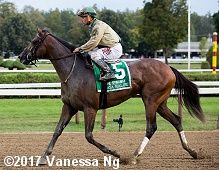 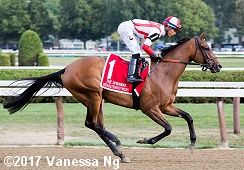 Left: Second place finisher Maya Malibu returns after the race. The Graham Motion trainee improved her record to 1 win and 1 second in 2 starts, earning $90,400 for owner-breeder My Meadowview Farm LLC.

Right: Third place finisher and beaten favorite Separationofpowers in the post parade. Jockey Jose Ortiz said, "She broke really sharp. We just got beat but she broke really well. I could of took it away but John (Velazquez on Pure Silver) had some speed also and he wanted to make a match race out of it. I had no option. When I looked back to go outside Irad was right on top of us and I didn't want take back and get stuck in the pack."

Kicking off the stakes quartet on Saturday, a field of 8 three-year-olds contested the $300,000 Saranac Stakes (G3) at 1 1/8 miles on the Mellon turf course. Undefeated Bricks and Mortar was sent off as the 2-1 favorite off wins in the Manila Stakes and the Hall of Fame Stakes (G2). In to challenge him included 3-1 second choice Yoshida, second in the Hall of Fame (G2) after finishing 5th in the Belmont Derby (G1), and 7-2 third choice Mr Havercamp, undefeated in two starts and making his stakes debut here.

Jockey Jose Lezcano sent 6-1 Voodoo Song loose on the lead, as many as 5 1/2 lengths clear of Mr Havercamo and 19-1 Caviar Czar giving chase in second and third. On the far turn jockey Joel Rosario sent Bricks and Mortar, 6th early, out 5 wide to challenge, moving up to within 1/2 a length of Voodoo Song. Voodoo Song opened up by 2 lengths at the 1/8 pole, then Yoshida, 5th early, rallied 4 wide but Voodoo Song held him off by a neck for the win in a hand-timed 1:46.18. It was 1/2 a length back to Bricks and Mortar third. This was the fourth win of the meet for Voodoo Song. He is the first to manage this feat since Native Dancer 65 years ago. 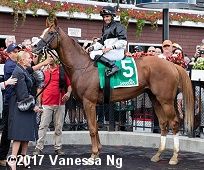 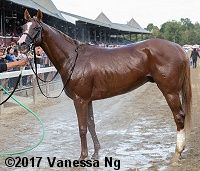 Left: Voodoo Song in the winner's circle. Winning trainer Linda Rice said, "He got pretty far in front and I got a little concerned because of the fractions. I couldn't tell if he was going too fast because the clock was wrong. Jose put him to sleep in the turn and they were making a fast move toward him. I thought 'oh geez, I hope he isn't empty,' and then he spurted off. What a thrill. The reason I've run him back so many times is he likes this course, he likes the configuration. It hasn't rained much, and he likes the firm going and that could change very quickly in the next 30 days or six weeks, so I thought let's take advantage of it we can rest him later."

Right: Voodoo Song gets hosed off after the race. Winning jockey Jose Lezcano said, "He broke to the lead and that was it. That was the only strategy going in; let him go and let him break lose. I know we were going fast, but that is how he likes it, running free. If you make him hang around he throws his head, so we let him go. He's happier that way and you saw the rest." 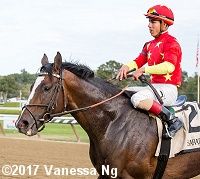 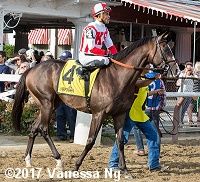 Right: Third place finisher and beaten favorite Bricks and Mortar heads out for the post parade. Jockey Joel Rosario said, "I didn't have a good start but it was OK, he likes to run like that. I had to make an early move to chase the leader. The pace was honest. I had to kind of get up and it took him out of his game a little bit. But he's a good horse, I give him credit." Trainer Chad Brown added, "The way the turf course is playing is rock hard, if you're on the lead, you're in good shape." 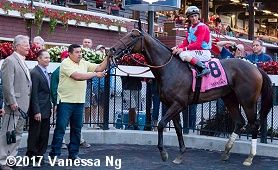 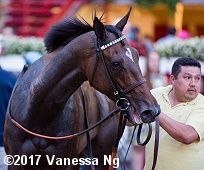 Left: Harmonize in the winner's circle. Winning trainer Bill Mott said, "She's been lacking a little closing turn-of-foot; we just thought she's been grinding a little bit more than she has in the past. I started her at a mile and she closed but not with enough energy, I guess. Lady Eli outclassed her in the Diana and we had an option to go to California but I thought let's try the 1 3/8 and we'll get firm ground. She had a wide trip. I was hoping we'd be laying second in the two-path and instead we were about fifth in the three-path. I wasn't liking our position. You hate to be three turns and be three-wide. Everybody in the race probably ran less ground than she did. I'm glad she wasn't three-and-a-half wide or she wouldn't have won by that nose."

Right: Harmonize in the paddock before the race. Winning jockey John Velazquez said, "I was happy with where I was. I tried to get her in front a little too soon but she waited, so it was a little tricky ride. When I got her to pass, (Manuel Franco aboard Grateful) bumped me, so we were riding side by side, with him on the inside, but it worked out in the end." 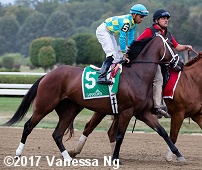 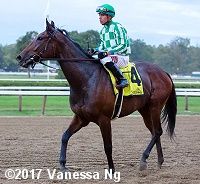 Left: Second place finisher Grateful in the post parade. Jockey Manuel Franco said, "I got the trip that I expected. I wanted to wait in front and that's what we did. I think I came out a little bit and bumped them but John just nailed me at the wire." Trainer Todd Pletcher added, "The horse ran very well. We got the trip we were hoping for. We just lost a tough head bob."