There were 5 graded stakes races run over the Aqueduct main track on Saturday. The second Grade 1 event on Wood Memorial day was the $400,000 Carter Handicap (G1) for older horses sprinting 7 furlongs and an early prep for the Breeders' Cup Sprint (G1). Breeders' Cup Dirt Mile (G1) 3rd place finisher Awesome Slew was sent off as the 9-5 favorite in the field of 11. In to challenge him included 2-1 Army Mule, undefeated in 2 lifetime starts and making his stakes debut here, and 5-1 Skyler's Scramjet, winner of the Tom Fool Handicap (G3). 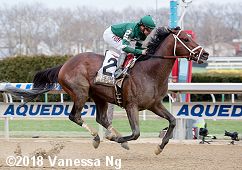 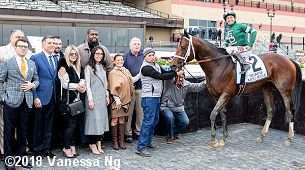 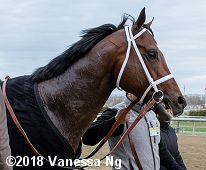 Left: Army Mule in the winner's circle. Winning trainer Todd Pletcher said, "The sky's the limit with him. He's just a super talented horse and it's a matter of keeping him happy and healthy and pointing him in the right direction. The way he finished today at seven-eighths, a race like the Met Mile would certainly make sense and be on the radar. You don't expect to win a Grade 1 by that many lengths, and I didn't even think the track is that fast today. He's something really special. We felt good coming into the race. My biggest concern was that it was only his third race and he was giving up a lot of seasoning to some other horses, but he showed us he deserved a chance, and I'm glad it worked out."

Right: Army Mule heads back to the barn after the race. 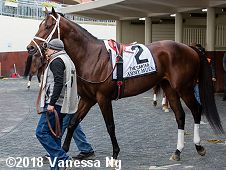 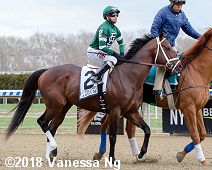 Left: Army Mule in the paddock before the race. Pletcher added, "It was a concern drawing the 2-hole in a full field, but when he broke well and put Joe in that spot, it was just a matter of Joe looking for a seam. He cut the corner but then he took him out off the rail to give him what might be the best part of the track. I don't think it's very biased, but all things being equal, you want to be a couple of paths off the rail."

Right: Army Mule in the post parade. Winning jockey Joe Bravo said, "He was so relaxed and quiet behind horses. I was kind of looking to try to get outside because it seemed like the other races were going down the middle of the track. Everybody starting coming outside and they took up those positions and in two jumps, he was able to jump through that hole and go by there, because that's what good horses do." 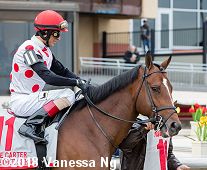 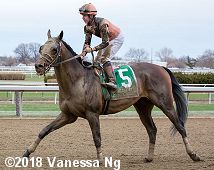 Left: Second place finisher and beaten favorite Awesome Slew heads out to the track before the race. Jamie Begg, assistant to trainer Mark Casse said, "Johnny got off the winner to get on ours, but he said he'd been working him all winter, and said that he was a pretty nice horse. So, I think if that horse wasn't in here, we're the next best, and off that long layoff, you can't really fault the effort he gave." Jockey John Velazquez added, "I had a great trip. I ran into a monster." 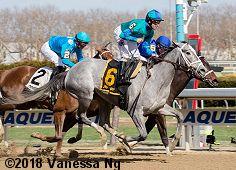 Kicking off the graded stakes quintet, the filly counterpart to the Wood Memorial is the $300,000 Gazelle Stakes (G2) for 3-year-old fillies, also contested at 1 1/8 miles, worth 100 points to the winner as part of the Kentucky Oaks Championship Series. Midnight Disguise was sent off as the 8-5 favorite in the field of 6 off wins in the Busanda and the Busher. In to challenge her included 3-1 second choice My Miss Lilly, 3rd in the Forward Gal (G3) and Busher, and 7-2 third choice Smokinpaddylassie, winner of 3 straight including the Beyond the Wire Stakes. 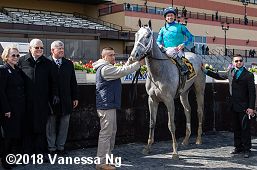 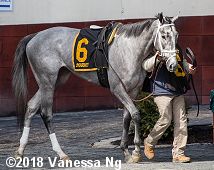 Left: My Miss Lilly in the winner's circle. Winning trainer Mark Hennig said, "She's a filly we've always been looking forward to getting around two turns. Her dam's side indicates sprint, but she's all Tapit. She's a big long-legged Tapit, just dying to run two turns. We felt like getting around two turns was going to happen for her at a mile and an eighth. I thought it was important to keep her out in the clear a little bit. She had to go a little wide coming off that turn and I was worried about that, that it might catch up to her late, but she I feel like she'll really relish more and more distance."

Right: My Miss Lilly in the paddock before the race. Winning jockey Joe Bravo said, "It was the first time I was able to sit on her, and she did everything correctly. I don't think distance is going to hurt her. She's bred to go long. I think she had (Sara Street and Virginia Key) beat. I don't think she's the kind of filly who is going to want to draw off." 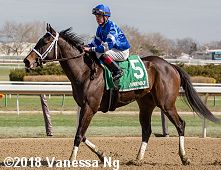 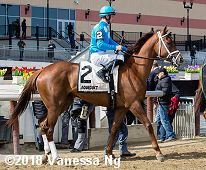 Left: Second place finisher Sara Street returns after the race. Jockey Dylan Davis said, "She got to the front and relaxed for me, even though there was a horse inside her. We got a little early pressure. It wasn't a problem, but I had to get her going a little earlier. She figured out she had to battle on a little more. She handled the two turns well. The distance was no problem. She's learning. She's a really nice filly, and she's going to go places." Trainer Kiaran McLaughlin added, "She ran very well. Second best today, no excuses. We ran great and we were happy with her performance. We were a little unlucky to get beat. We'll have talk about what's next." 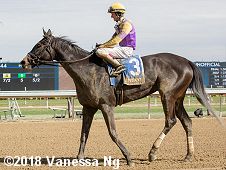 Fourth place finisher and beaten favorite Midnight Disguise returns after the race. Trainer Linda Rice said, "This performance was disappointing. The speed didn't break and they went pretty slow. I don't know how much that was a factor, but either way I think it was a subpar effort for her. Up to this point she's fired every time we've lead her over here and today wasn't her day. 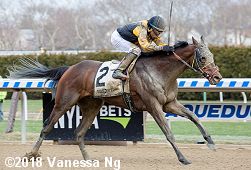 The $150,000 Excelsior Stakes (G3) featured a field of 7 older horses going 1 1/8 miles on the main track. Discovery (G3) winner Control Group was sent off as the 9-4 favorite over 11-4 Zanotti, second in the Harrison Johnson Memorial at Laurel, and 3-1 Harlan Punch, winner of the Stymie.

Jockey Paco Lopez sent Zanotti to the lead entering the clubhouse turn through fractions of 24.81, 48.72, and 1:12.70 while pressed by Control Group and stalked by Harlan Punch. Entering the stretch Control Group tired as Zanotti continued to lead through 1 mile in 1:37.83. However, 7-1 Discreet Lover, last early under Manuel Franco after stumbling at the break, rallied late to win going away by 2 1/2 lengths in 1:50.45. It was a neck back to Harlan Punch third, while favorite Control Group checked in 5th. 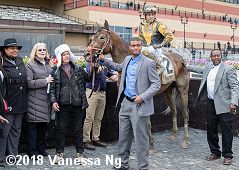 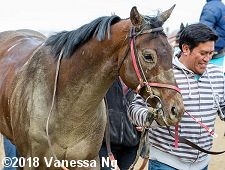 Left: Discreet Lover in the winner's circle. Winning owner-trainer Uriah St. Lewis, celebrating his first graded stakes win said, " I bought him for $10,000 at the Timonium Sale. He tries all the time, doesn't matter what. He just grabbed his quarter coming out of the gate, so I got to go back and look at him, but he tries all the time. He eats good, he don't care who he runs against. He's always trying. He comes up here a lot of times and finishes fourth, and third and today he finally did it. (The late Jose Flores) used to ride this horse all the time, he rode most of my horses, and he passed away a few weeks ago. He rode this horse Saturday in the stakes, and on Monday he died. He would've come up here and rode him today, but when he passed away I asked Angel Cordero (agent for Franco). I love Jose, Jose was like a brother to me. I keep saying this is for Jose."

Right: Discreet Lover heads back to the barn. Winning jockey Manuel Franco said, "When he went down out of the gate, when he stumbled, I said, 'well I've got to use plan B,' take back and wait as long as I could. As soon as I tapped him on the shoulder, he picked them up and he was going so well." 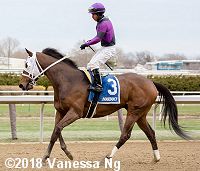 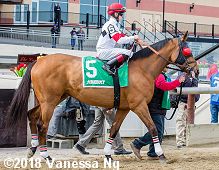 Right: Third place finisher Harlan Punch heads out to the track before the race. He improved his record to 7 wins, 8 seconds, and 5 thirds in 29 starts, earning $590,993 for owner-trainer David Jacobson. 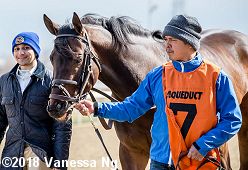 Fifth place finisher and beaten favorite Control Group walks over before the race. The Rudy Rodriguez trainee has a record of 7 wins, 3 seconds, and 3 thirds in 16 starts, earning $440,070 for owners Michael Dubb and David Simon.