The major New York prep race for the Triple Crown is the $750,000 NYRA Bets Wood Memorial Stakes (G1), contested at 1 1/8 miles, one complete circuit of the Aqueduct main track, 100 points to the winner as part of the Kentucky Derby Championship Series. Conditions were typical for early April at the Long Island oval near Kennedy Airport, with overcast skies and temperatures in the mid 40's. Gotham (G3) winner Enticed was sent off as the 5-4 favorite in the field of 9. In to challenge him included 15-4 second choice Restoring Hope, a maiden winner last out, and 4-1 third choice Vino Rosso, 4th in the Tampa Bay Derby (G3) after finishing 3rd in the Sam F. Davis (G3).

Jockey Jeremy Rose sent 9-1 Old Time Revival to a clear uncontested lead of as many as 6 lengths through fractions of 22.96, 46.68, and 1:11.44 while chased by Enticed second and Restoring Hope third. Halfway around the far turn Old Time Revival tired from the fast pace, as Vino Rosso, 6th early under John Velazquez, and Enticed easily passed him. Vino Rosso and Enticed dueled in the stretch bumping several times, before Vino Rosso pulled away in the final 1/16 to win going away by 3 lengths in 1:49.79. It was another 2 1/2 lengths back to Restoring Hope third. Junior Alvarado aboard Enticed claimed foul against Velazquez aboard Vino Rosso, but after a lengthy inquiry the stewards let the result stand. 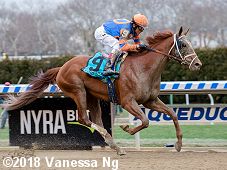 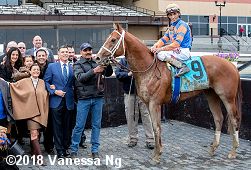 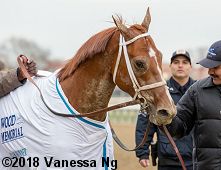 Left: Vino Rosso in the winner's circle. Winning trainer Todd Pletcher said, "There's no question there was some contact. Johnny interpretation was when he came over close to him, and (Enticed) kind of touched him, he touched him back. No question there was contact, I thought it was mutual, but I don't think it affected the outcome of the race. I think Vino Rosso looked like he was going to win at that point, and Enticed held on for second, so in my opinion it did not affect the outcome of the race.

Right: Vino Rosso heads back to the barn after the race. Pletcher added, "I was a little worried right at the start, because his hind-end kind of slipped out leaving the gate, and it looked like it took him about a hundred yards to get engaged. He was a little farther back than I thought he would be, but when you take the pacesetter out, he really was close to the contenders. I felt good about it. I was just hoping he would sustain his momentum around the turn, and he finished up and did great. We're feeling like we're seeing a horse that has that talent, and he's doing well, and we felt like that mile and an eighth is something he's looking for. This is the performance we've been looking for." 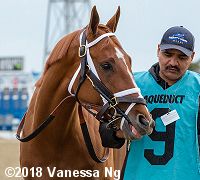 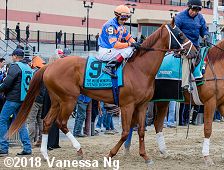 Left: Vino Rosso walks over before the race. Winning jockey John Velazquez said, "I got close to (Enticed) and he was coming out. So, I made my horse switch leads and when he switched, I leaned on him a little bit, and then he pushed me out and my horse went right back on him. That's what happened. I got him easy, anyway. He was holding his ground out and I was holding him back in. He was the horse to beat and I wasn't going to give him a chance.

Right: Vino Rosso heads out for the post parade. Velazquez added, "He broke a little slower than I anticipated, but once I got to the backstretch, I was in the position that I wanted to be. Knowing him a little bit the last two races, when he gets to the second turn, he wants to back out of there. Today, I kept him running, and he responded." 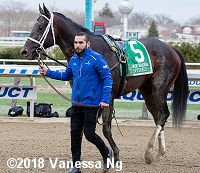 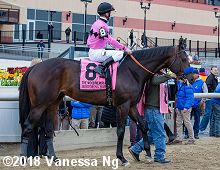 Left: Second place finisher and beaten favorite Enticed circles during the inquiry. Trainer Kiaran McLaughlin said, "They take them down a lot more often with less interference. I thought we had a really good chance to get put up. We got hit pretty hard twice and lost our action behind. We ran very well to finish second, but I thought they could have put us up." Jockey Junior Alvarado added, "I got bumped three times, I got pinched on the rail. This was way too much. I didn't even bump him once. I don't know what to say. This is unacceptable. If somebody else rode that way, he would have been taken down. It's not the right thing. I got bumped three times, I got fouled, what else do I need to get?"

Right: Third place finisher Restoring Hope heads out to the track before the race. Tonja Terranova, assistant to trainer Bob Baffert said, "I talked to Bob on the phone he thought he ran really well. First time going up in a Grade 1. Prat said he got a little intimidated when Kiaran's horse [No. 5 Enticed] was pushing him out at the end. Overall, Bob's really happy." Jockey Flavien Prat added, "He ran a good race. For his first stakes against these types of horses, it was a good run. I was expecting some pace. He just ran his race." 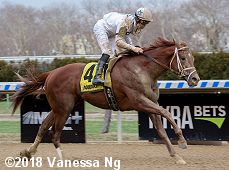 Immediately before the Wood, the $250,000 Bay Shore Stakes (G3) featured a field of seven 3-year-olds sprinting 7 furlongs on the main track. Engage was sent off as the 6-5 favorite, unraced since winning the Futurity (G3) at Belmont in October. In to challenge him included 7-5 second choice National Flag, an allowance winner after finishing 5th in the Hopeful (G1) at Saratoga, and 8-1 Aveenu Malcainu, 3rd in the Nashua (G2).

Jockey Kendrick Carmouche sent 12-1 A Different Style to the lead exiting the chute through fractions of 22.82 and 45.77 while pressed by Aveenu Malcainu and stalked bu 24-1 Aqua Bel Sar. Entering the stretchm Aveenu Malcainu gained a short lead through 3/4 in 1:10.78, but Natonal Flag, 6th early under Flavien Prat, circled the field to win going away by 4 lengths over late-running favorite Engage in 1:23.16. It was another 3/4 length back to Aveenu Malcainu third. 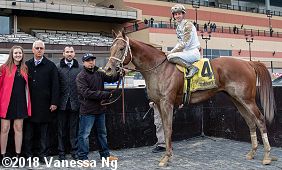 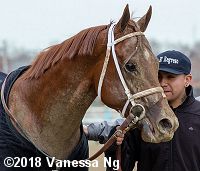 Left: National Flag in the winner's circle. Winning trainer Todd Pletcher said, "I was concerned after the rough start. He had never really been in that position. He got hit pretty hard from both sides and I was afraid at that point. You never know how a horse is going to react from getting bumped that hard in the beginning. It looked like he gathered himself up and Flavien rode a smart race from that point. He didn't panic and just gave him time to get his legs up and underneath him. He produced and put in a big run down the lane.

Right: National Flag heads back to the barn after the race. Winning jockey Flavien Prat said, "It was really impressive. I got bumped out of the gate; I was hoping to get closer to the front. After that, I changed my plans and rode him off the pace. I wanted to keep him honest and he made a great move." 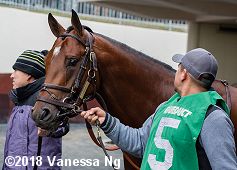 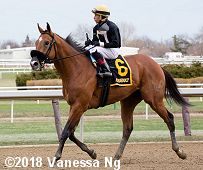 Left: Second place finisher and beaten favorite Engage in the paddock before the race. The Chad Brown trainee improved his record to 2 wins and 2 seconds in 4 starts, earning $206,400 for owner Woodford Racing LLC.