There were 2 more graded stakes races on Saturday at Santa Anita. The $200,000 San Vicente Stakes (G2) featured a field of 5 three-year-olds going seven furlongs on the main track. Conditions were excellent in Arcadia with sunny skies and temperatures in the low 80's. Concert Tour was sent off as the 2-5 favorite off his debut win January 15 at Santa Anita. In to challenge him included 7-2 second choice The Chosen Vron off his December 27 debut win, and 5-1 third choice Freedom Fighter, unraced since his debut win at Del Mar on August 1.

Jockey Drayden Van Dyke sent Freedom Fighter to the lead exiting the chute through fractions of 23.41 and 45.98 while pressed by The Chosen Vron and stalked by Concert Tour. Turning for home Freedom Fighter continued to lead through 6f in 1:10.56 but Concert Tour, moved 3 wide by jockey Joel Rosario, closed and got up to win by 1/2 a length in 1:24.06. It was another 2 3/4 lengths back to The Chosen Vron third. 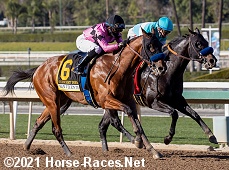 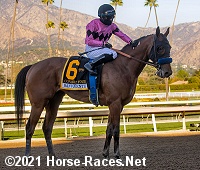 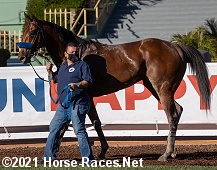 Left: Concert Tour in the winner's circle. Winning trainer Bob Baffert said, I learned a lot about (Concert Tour), how he wants to run and maybe he doesn't need blinkers. He's pretty sharp. That's why we have these races. Now they go to where I can stretch them out. This horse has two races under his belt, but those were two really good horses. I think the timing is perfect for (them). I think from here you can take that big jump that you want to take, he's going to have to really step it up now but now he's ready for it."

Right: Concert Tour heads back to the barn. Winning jockey Joel Rosario said, "It was a good trip. After the other horse went to the lead I thought (The Chosen Vron) was going to go faster, but he took his time and I thought I was in a good spot. He was a little green and he cut away a little bit at the last part when I took the lead. I thought that was a good race." 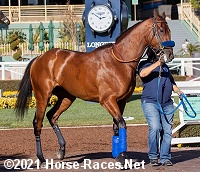 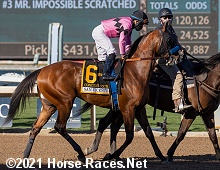 Left: Concert Tour in the paddock before the race.

Right: Concert Tour in the post parade. Baffert added, "He'll be nominated everywhere, we will see how he comes out of it. He's pretty keyed up well. He showed his heart and determination. I knew the other horse was going to give him a run for his money and he did. He's going to improve off of that also." 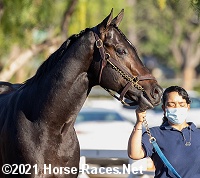 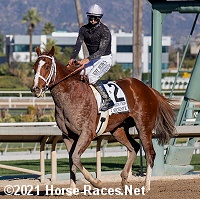 Second place finisher Freedom Fighter heads back to the barn after the race. Jockey Drayden Van Dyke said, "He ran huge for being off as long as he has been. They said he has been training lights-out, so he ran like he has been training. Second best today, but a very nice horse."

Right: Third place finisher The Chosen Vron returns after the race. He improved his record to 1 win and 1 third in 2 starts, earning $60,600 for owner-trainer Eric Kruljac and co-owners Robert Fetkin, John Sondereker and Richard Thornburgh. 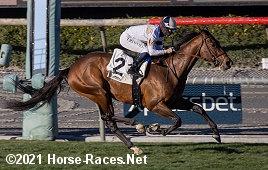 Closing out the weekend's stakes quintet was the $100,000 Thunder Road Stakes (G3) for older horses going 1 mile on the turf. The race was scheduled for last Saturday but postponed 1 week due to heavy rain. Bob and Jackie was sent off as the 2-1 favorite in the field of 6 (after 2 scratches) off his 2nd place finish in the San Gabriel Stakes (G2). In to challenge him included 11-4 second choice Somebeyay, an allowance winner last out, and 3-1 third choice Hit the Road, unraced since winning the Oceanside at Del Mar in July. 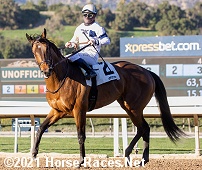 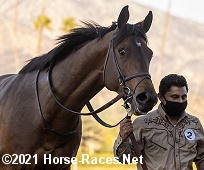 Left: Hit the Road in the winner's circle. Winning trainer Dan Blacker said, "The horse has been so cool for days I was kind of worried that he was getting sick or something. He was so quiet, it just shows you how classy he is. He's just a really special horse and I am so lucky to have him. More lucky to have owners that supported me. We're lucky to have a horse like this. Like I said before the race, he was born a great horse. I'm just lucky to have him in my barn. (Umberto) worked the horse in .59 a week ago and he called me after the work and said, 'He just worked okay.' I was kind of worried he didn't think he looked too good. Then after the race he told me, 'I didn't want to get you too excited.'"

Right: Hit the Road heads back to the barn after the race. Winning jockey Umberto Rispoli said, "He's a nice horse. We always believed in him and had faith in him. It was a shame he missed a couple of stakes, he looks like he's headed in the right direction. I was on top of the race and by the five furlong marker he was already pulling hard and I could understand he was fresh. He was so good today. At the top of the stretch he had good acceleration and covered good ground. He met my expectations today. When I worked him, I could feel the horse (had) come back in a huge way." 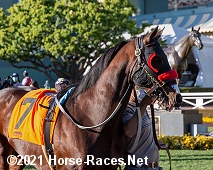 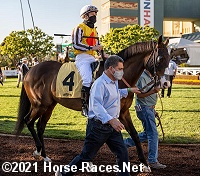 Left: Second place finisher and beaten favorite Bob and Jackie in the paddock before the race. The Richard Baltas trainee improved his record to 4 wins, 3 seconds, and 1 third in 10 starts, earning $269,551 for owners Calvin Nguyen and Joey Tran.

Right: Third place finisher Border Town in the paddock. The Richard Mandella trainee improved his record to 3 wins, 2 seconds, and 3 thirds in 12 starts, earning $152,060 for owners Perry and Ramona Bass.