The 50,000 fans who crammed into historic Saratoga Race Course for the 146th Travers Stakes were also treated to 6 additional graded stakes on the undercard. Conditions were ideal for racing, with mostly sunny skies, a light breeze, and temperatures in the high 70's, with the main track fast and turf courses firm.

A field of 8 older horses contested the $1 million Sword Dancer Stakes (G1) over 1 1/2 miles on the inner turf course, looking for automatic entry into the Breeders' Cup Turf. Hong Kong Vase (G1) winner and Dubai Sheema Classic (G1) runner-up Flintshire was sent off as the even-money choice over 5-1 Red Rifle, winner of the Bowling Green (G2), and 7-1 Twilight Eclipse, winner of the Man O'War (G1) before 7th in the Manhattan (G1). 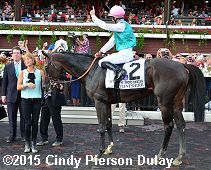 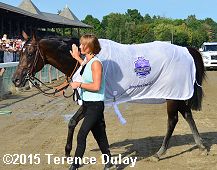 Left: Flintshire in the winner's circle. Teddy Grimthorpe, racing manager for owner-breeder Juddmonte Farms said, He's always been a very sound type of horse and the way he races - and the sort of value of the races that are available to him around the world - makes him a really attractive proposition for us. He loves fast ground, 1 1/2, so from that point of view he's ideal. It's hugely important to get a win like this before the Arc. We've got his father, we've got his mother, we've got his grandmother, we've got his sister. The people who work on the farms, the people who race him, this is huge for us."

Right: Flintshire heads back to the barn after the race. Winning jockey Vincent Cheminaud said, "He was a little bit slow.  Andre (Fabre) the trainer said to keep to his position and to remain calm and that he has a good turn a foot. The horse was in good position and quickened well for him to go through the gap." 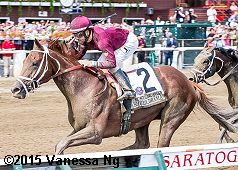 The $750,000 Personal Ensign Stakes (G1) featured a field of 6 older fillies and mares going 1 1/8 miles with the winner earning a spot in the Breeders' Cup Distaff. Allaire DuPont Distaff (G3) and Shuvee (G3) winner Stopchargingmaria was the 3-2 favorite over 2-1 Untapable, winner of the Apple Blossom (G1) before second in the Ogden Phipps (G1), and 7-2 Sheer Drama, winner of the Delaware Handicap (G1).

Jockey Javier Castellano sent Stopchargingmaria to the front and she set fractions of 24.06, 47.72, and 1:11.51 while pressed by Untapable. At the 3/16 pole Sheer Drama, who had stalked the pace in third, moved up to gain the front through 1 mile in 1:35.96. Kept to task by Joe Bravo, Sheer Drama drew off to win by 1 1/4 lengths over late-running 6-1 Got Lucky in 1:49.05. It was just a neck back to Untapable third, while Stopchargingmaria was another 1 3/4 length back in fourth.
Full results chart 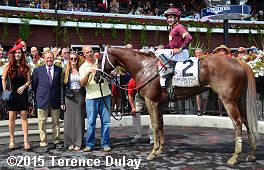 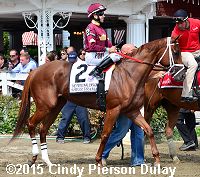 Left: Sheer Drama in the winner's circle. Winning trainer David Fawkes said, "It couldn't have gone any better. When I saw that neither of the other two was getting away from the other, it made me really comfortable. I loved the fact they were doing all of the work and that's how I hoped it would go. The stretch drive didn't make me nervous because I know how she is. She's kind of a grinder. When I saw where she was at the quarter-pole, I was really happy. I was happy as soon as they broke. It worked out perfectly. She's getting better as she's getting older. She's maturing. She does everything right."

Right: Sheer Drama heads out to the track before the race. Jockey Joe Bravo said, "It's nice when you're able to win for a friend. David and I have been friends for a long time, but when you have a special horse, it's pretty cool. This horse has just really been stepping up and getting better and better. Today was a true test for her. I mean, the best fillies in the country were here against us, this is Saratoga and wow, you couldn't have scripted it any better before the race. I'm just thankful to be a part of the team, to be honest." 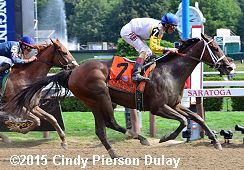 The $500,000 Ballerina Stakes (G1) featured a field of 7 older fillies and mares going 7 furlongs on the main track, with the winner earning automatic entry in the Breeders' Cup Filly and Mare Sprint. Humana Distaff (G1) winner Dame Dorothy was the 7-5 favorite over 3-1 Unbridled Forever, winner of the Shine Again, and 6-1 Room for Me, winner of the Regret. 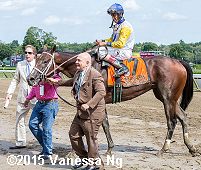 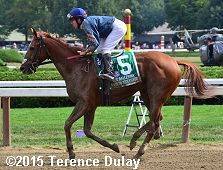 Left: Unbridled Forever heads to the winner's circle led by owner Charles Fipke. Winning jockey John Velazquez said, "We got a perfect trip. We broke the way we thought and we were behind the pack, worked our way through on the inside until we got to the quarter pole and then I pulled her out and she responded. That's what she did the last time, and she did it back again today." Trainer Dallas Stewart added, "Johnny had her in a good spot and he felt good about it. He said the filly acted a little more on her game in the post parade and in the paddock so I felt she would run hard. She's a fighter. I knew she would finish it off."

Right: Second place finisher Kiss to Remember returns after the race. The 11-1 shot raced 6th under Irad Ortiz Jr., put in a strong rally late despite Ortiz losing the whip at the 1/16 pole, to finish second beaten a length. 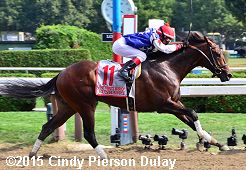 Jockey Edgar Prado sent 11-1 Runhappy to the lead exiting the chute through fractions of 22.43 and 44.54 while stalked by 16-1 Limousine Liberal. Entering the lane Runhappy began to draw off, getting 3/4 in 1:08.17 and finishing 4 lengths ahead of Limousine Liberal in 1:20.54, just 0.14 seconds off the track record. It was another 2 lengths back to favorite Holy Boss third.
Full results chart 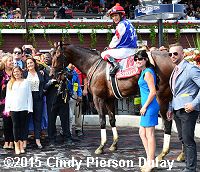 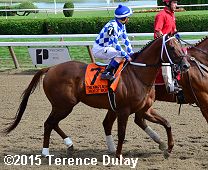 Left: Runhappy in the winner's circle. Winning trainer Maria Borell said, "We were pretty confident going in. He couldn't have been training any better and we wouldn't have spent the money to come up here if we thought he couldn't win. I was a little nervous at the early fractions but I knew he could do it. We really prepared him well at home. I knew he was good, but that was really good."

Right: Third place finisher and beaten favorite Holy Boss in the post parade. The 5-2 choice raced in third 2 1/2 lengths off the pace under Ricardo Santana Jr. but could not improve late finishing third beaten 6 lengths. 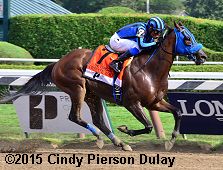 The $700,000 Forego Stakes (G1) is a Breeders' Cup Challenge qualifier in the Sprint division with a field of 12 older horses sprinting 7 furlongs. Belmont Sprint Championship (G3) winner and Metropolitan (G1) third place finisher Private Zone was the 8-5 favorite over 3-1 The Big Beast, second in the Alfred Vanderbilt (G1), and 7-2 Tamarkuz off an allowance win. 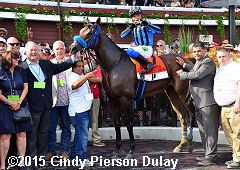 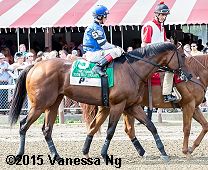 Left: Private Zone in the winner's circle. Winning jockey Martin Pedroza said, "It is hard to win in Saratoga. They say a good horse can run anywhere. This horse impresses me every time he runs.  He can carry his speed. When I asked him to go, I screamed at him and he just took off. I said 'I don't need to hit him, but I just want to make sure I get the job done.'  Jorge Navarro has done a wonderful job. He is like a monster. When he was in California, I didn't even recognize him. Now he is a totally different horse. He's put on weight. He looks stronger than ever."

Right: Second place finisher The Big Beast in the post parade. The 3-1 second choice pressed the pace in second under John Velazquez but couldn't keep up with the winner late, finishing second beaten 3 3/4 lengths. 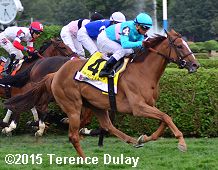 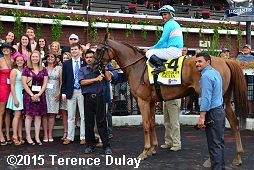 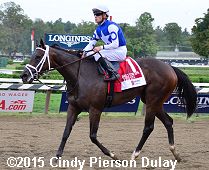 Left: Dacita in the winner's circle. Winning trainer Chad Brown said, "This filly ran terrific. She's been a little difficult to figure out in the morning. She's a good looking filly. She came into my barn in good shape. She's been steady in her works. I figured maybe she would need a race actually coming in here. It looked like a good spot to get her started because of the distance, timing, and turf. I thought Javier (Castellano) would fit her. Thankfully it just set up for us. They got up in time. I'm very pleased with the effort."

Right: Second place finisher and beaten favorite Tepin returns after the race. The 8-5 choice contested the pace under Julien Leparoux, led in deep stretch but was caught in the last strides.