The highlight of the Saratoga meeting is the Travers Stakes (G1), featuring the best 3-year-olds on the east coast going 1 1/4 miles on the main track. The purse for the 146th running was announced at $1.25 million, but was boosted to $1.6 million if Triple Crown winner American Pharoah started. Conditions were excellent at "The Spa" with mostly sunny skies and temperatures in the high 70's, with paid attendance capped at 50,000. As expected, American Pharoah was sent off as the 3-10 favorite, riding an 8 race winning streak, the last 5 in Grade 1 company: Arkansas Derby, Kentucky Derby, Preakness, Belmont, and Haskell. Those trying to prevent him from becoming the first Triple Crown-Travers winner since Whirlaway in 1941 included 11-2 second choice and Breeders' Cup Juvenile (G1) winner Texas Red. winner of the Jim Dandy (G2), the main local prep for this event, and 15-2 third choice Frosted, winner of the Wood Memorial (G1) but second in both the Belmont and Jim Dandy.

Jockey Victor Espinoza sent American Pharoah to the lead first time by and he set easy fractions of 24.28, 48.30, and 1:11.48 saving ground down on the rail while pressed by Frosted and stalked by both Upstart and 16-1 Keen Ice. Entering the lane, Frosted poked his head in front through 1 mile in 1:35.08, but American Pharoah dismissed him to regain the lead at the 1/8 pole. However, Keen Ice, wide throughout, rallied to catch American Pharoah inside the 1/16 pole to pull off the 3/4 length upset in 2:01.57 over the fast main track. It was 2 1/4 lengths back to Frosted third. The "Graveyard of Champions" strikes again. 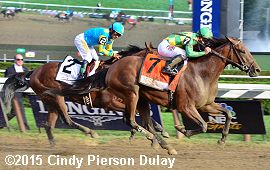 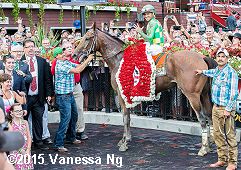 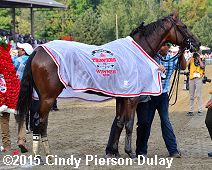 Left: Keen Ice in the winner's circle. Winning trainer Dale Romans said, "American Pharoah's legacy is not tarnished in any way. Secretariat got beat, Seattle Slew got beat, Affirmed got beat. He has run very hard all year and he ran a very good race today. He was pressed, Frosted took it to him, and we were fortunate to be running behind. I'm not going to take anything away from our horse. He ran him down. He bellied down to get him. My horse was extremely gutsy. He got a good ride from Javier. He's been great to train, and people are going to know who he is before his career is over."

Right: Keen Ice heads back to the barn. Owner Jerry Crawford of Donegal Racing said, "I want to say a heartfelt thanks to Team Zayat for bringing American Pharoah here today.  The reason this is a great victory for us is because they were willing to be true sportsmen.  They made this race as huge as it was, probably one of the biggest ever.  So I'm grateful to them for being true sportsmen. Our horse has gotten better every single race.  He's been coming and coming and coming.  You saw that in the Haskell, even though it was not his preferred distance.  Today was a distance he likes a little better.  I can't say I'm surprised by the outcome.  Obviously, I'm pleased.  I didn't think we were an even money shot or anything like that, but I thought we were going to run really well." 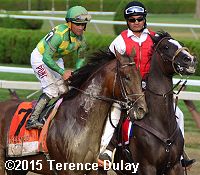 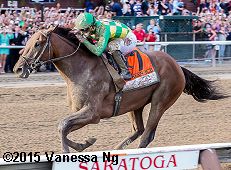 Left: Keen Ice returns after the race. Winning jockey Javier Castellano said, "Turning for home, at the 3/8 pole, I saw those two horses head-to-head and I said, 'That's a good sign.' When I saw the 1/4 pole, I was getting closer to him, and I didn't see him take off. I saw those two horses backing up to me really quick and that's when I thought I had it. When my horse kept getting closer and closer, I started getting more and more excited and thought, 'This is it. It's going to be my fifth Travers.' And here I am."

Right: Keen Ice winning as seen from the infield. Romans added, "They looked like they were really running and they were working, and I could see my horse was getting through on the inside, like we needed to be, and we got the tip-out at the right point. Then he switched to his right lead and had dead aim on them. And he just wore 'em down." 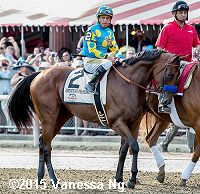 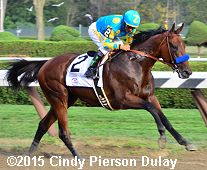 Left: Second place finisher and beaten favorite American Pharoah in the post parade. Trainer Bob Baffert said, "I could tell down the back side he was struggling a little bit.  I could tell by Victor's body language he wasn't really giving it -- he didn't have the power that he usually has.  But we saw the last 3/8 was just guts, guts and glory. After he finally shook Frosted off, I really thought, well, maybe there's a chance. He just fought back valiantly, and it wasn't his day today. We gambled.  We brought him up here.  So he showed us all signs that he was ready to go, but you really don't know until they actually run.|

Right: Beaten favorite American Pharoah leads first time by. Owner Ahmed Zayat said, "My gut feeling right now, without being outspoken, is to retire.  It's to say we had a Triple Crown champion.  I feel a huge responsibility.  I don't think you guys understand, and I pushed so hard.  I hope I didn't push Bob because I know Bob is not the person to be pushed. Bob let the horse tell us.  And we were day on, day off because we honestly genuinely wanted the horse to tip us.  The horse could not have been better.  He gained weight.  So we came here because of what we've seen on Friday.  15,000 people, this is what it is all about, this game.  I'm second guessing myself because now, if the horse is tailing off and he's not the Pharoah we are used to, even though he fought hard, then I have a responsibility for my horse, and I have to come to say it was unbelievable run." 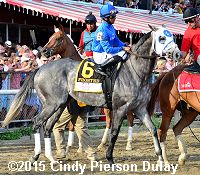 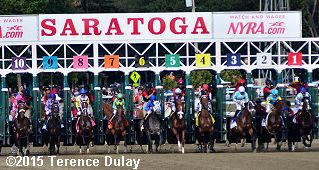 Left: Third place finisher Frosted heads out to the track before the race. The 15-2 third choice pressed the pace under Jose Lezcano, gained a short lead into the lane, but tired late to finish third beaten 3 lengths. The Kiaran McLaughin trainee improved his record to 2 wins, 6 seconds, and 1 third in 11 starts, earning $1,486,800 for owner-breeder Godolphin Racing.

Right: The horses break from the gate for the Travers. Victor Espinoza aboard American Pharoah said, "He was not the same like I've always been riding him before.  He was good going to the gate.  I noticed something that I never saw. I was just a little bit concerned at that point because he never had like -- not even just a tiny bit of sweat before to the gate.  Today he was a little bit sweaty to go in there.  He bumped out of there nice.  I put him right in the lead.  The pace was not too fast.  It was good.  From the 5/8 pole, his energy level was not the same like before.  He was not really strong like he used to.  He was up around but not quick enough. He kind of lost his stride." 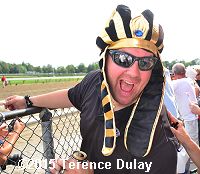 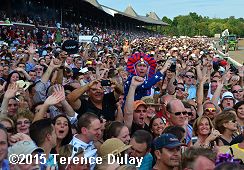 Although attendance was capped at 50,000 paid admissions, the crowd was still quite huge and there were tons of American Pharoah fans who were there to cheer for him. Even though he lost, they still gave him a round of applause when he returned after the race.