Note:   Justify was bred in Kentucky by John D. Gunther of Glennwood Farm and sold at the Keeneland September Yearling sale for $500,000 in 2016. He was unraced as a 2-year-old, making his first start on February 18, 2018, winning a maiden race at Santa Anita then an allowance. He has remained undefeated this year with the Santa Anita Derby (G1) as his final Kentucky Derby prep. He splashed home in front by 2 1/2 lengths in the Kentucky Derby (G1) to break the Curse of Apollo as the 11-4 favorite, although he came out of the race with a bruised foot. In the Preakness Stakes (G1), sent off as the 2-5 favorite he dueled with Good Magic for the first mile then held off late-closing Brazavo and Tenfold for the hard-fought 1/2 length victory. In the Belmont Stakes (G1) for his Triple Crown bid, Mike Smith put him on the lead and he was uncontested the whole way around, easily holding off Gronkowsky by 1 3/4 lengths to complete the sweep to become the 13th Triple Crown winner, the first to do so without a juvenile race and only the second to finish undefeated. His current record is 6 wins in 6 starts with $3,798,000 in earnings. 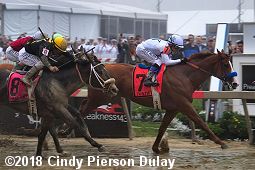 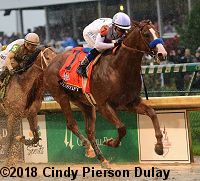 Bob Baffert is one of the most recognizable figures in racing today, especially during the Triple Crown, having trained American Pharoah and Justify. The native of Nogales, AZ started training quarter horses, winning the prestigious Champion of Champions at Los Alamitos twice, before switching to Thoroughbred racing, with his first yearling purchase, Thirty Slews, going on to win the Breeders' Cup Sprint.

He is the second trainer to win 2 Triple Crowns, the first being "Sunny Jim" Fitzsimmons (Gallant Fox 1930, Omaha 1935). At time of writing he has won the Kentucky Derby 5 times, the Preakness 7 times, the Belmont 3 times, the Kentucky Oaks 3 times, the Breeders' Cup Classic 3 times (as the only trainer to do so in a natural hat trick: 2014, 2015, and 2016), and the Dubai World Cup 3 times. It is worth noting that all of his Derby winners went on to win the Preakness.

In 2009 he was inducted into the National Museum of Racing and Hall of Fame in Saratoga Springs, alongside Silverbulletday, one of the best fillies from his barn. The following year Point Given, winner of the 2001 Preakness and Belmont, after finishing 3rd in the Derby, was inducted.

Frequently seen with him in public appearances are his wife Jill and son Bode, named after downhill skier Bode Miller. Baffert also has 4 children from a previous marriage.

With as large an operation as Baffert has, with horses stabled at Santa Anita and Churchill Downs with some shipping out to New York or beyond, he trusts his top horses to Jimmy Barnes. Hired on by Bob Baffert in 1999, his wife Dana was already working for Baffert as an exercise rider, a role she has held since 1997. When Baffert suffered a heart attack in Dubai, Barnes took over the stable until the boss could return to his regular duties. In 2017, Barnes fell from a horse and broke his pelvis, but recovered well enough to work the Breeders' Cup at Del Mar, albeit on crutches. Baffert said, "I went (to the hospital) to see him and he's laying there, and he says, 'Man, I feel like I let you down.' That's the way Jimmy is. He makes my job so much easier. I've got to be concentrating on all these horses, where they're going to run, dealing with the ownership, buying horses. So when he's back here with the horse, I don't have to worry about it. He knows what he has to do. He knows the way I think."

After Arrogate, Able Tasman, and Justify, a casual fan of racing might assume Mike Smith has been with Team Baffert for years, but this is not the case. Baffert has used many different jockeys over the years, most notably Victor Espinoza (who rode American Pharoah), but Smith earned the top job just 2 years ago, when he rode the lightly raced Arrogate, who skipped the Triple Crown, to victory in the Travers Stakes. Arrogate and Smith went on to win the Breeders' Cup Classic, Dubai World Cup, and the inaugural Pegasus World Cup. "Big Money Mike" as he has come to be known, is the oldest jockey to win the Triple Crown, at age 52, and is showing no signs of stopping, although he has been riding fewer races overall, focusing on quality over quantity. He started his riding career in his native New Mexico, dropping out of high school to pursue his dream. He completed his apprenticeship at Canterbury Downs, Minnesota, then moved his tack to New York in 1989 and on to Southern California in 2000 which has been his home ever since.

At time of writing he has won the Derby and Preakness twice, the Belmont three times, the Kentucky Oaks twice, and the Breeders' Cup Classic 5 times. He also has 1 win in the Irish 2000 Guineas (Fourstars Allstar in 1991) and the Queen's Plate (Awesome Again in 1997). He has won three of the major lifetime achievement awards for jockeys, the Mike Venezia Memorial Award in 1994, the George Woolf Memorial Award in 2000, and the Laffit Pincay Jr. Award in 2017.

Founded by Kenny Troutt and Bill Casner, WinStar Farm is located on the grounds formerly occupied by historic Prestonwood Farm in Versailles, Kentucky. The farm is involved in stallions as well as racing, winning the Kentucky Derby with Super Saver (2010) and Justify, the Breeders' Cup Classic with Drosselmeyer (2011), and the Belmont Stakes two years in a row, Creator in 2016 and Justify this year. Their current stallion band includes Pioneerof the Nile, Speightstown, More Than Ready, Bodemeister, Distorted Humor, and Tiznow. Third generation horseman and stakes-winning trainer Elliott Walden retired from training to become the farm's President, CEO, and Racing Manager in 2005. WinStar owns 60% of Justify's breeding rights.

Founded in 2013 by Malaysia-born architect and entrepreneur Teo Ah Khing, the China Horse Club is meant to be Asia's premier lifestyle, business, and thoroughbred racing club, with over 350 stakes wins to date, 20 of which being Grade or Group 1. The club races horses alone or in partnership, worldwide, including Australia, Europe, Singapore, and the USA. Their first significant American success was Abel Tasman, putting the Club into the spotlight when she won the 2017 Kentucky Oaks for trainer Bob Baffert. The Club's Bloodstock Advisor is John Warren, who also serves a similar role for Queen Elizabeth II. The Club owns 25% of Justify's breeding rights.

Founded in 2000 by Jack and Laurie Wolf, the Starlight Racing partnership's goal is to compete and win at racing's highest level. Their stakes winners include Harlan's Holiday, Shanghai Bobby, Ashado, Octave, Algorithms, and now Justify. The majority of their horses are trained by Todd Pletcher. The business model involves forming partnerships to purchase yearlings to race, and ultimately sell at the end of their racing careers. Starlight's investment is only for Justify's racing career (explained below).

Founded by Sol Kumin, Head of Plains Partners' investment is also only for Justify's racing career (explained below). Head of Plains became a part-owner in March. Along with Justify, Head of Plains' stakes winners include Lady Eli, Exaggerator, Undrafted, and this year's Kentucky Oaks and Acorn winner Monomoy Girl. Kumin said, "It's more fun to be in the winner's circle when Justify wins the Derby holding the trophy. So you kind of have to pick. If this became my full-time job, which it won't, I would have a different program, focusing more on the stallion business and breeding."

The most secretive of the owners, and rarely mentioned, is George Soros' Soros Fund Management, which is behind SF Bloodstock and SF Racing Group, an international racing and breeding operation that started in 2008. In 2015, SF Bloodstock entered a 3-year partnership with WinStar and China Horse Club, allowing the team to purchase both Justify and Audible, but SF later sold their racing rights to Starlight and Head of Plains (but retained their breeding rights). Australian Gavin Murphy is the public face of SF, serving as the fund's manager and tax counsel. SF part-owns Newgate Farm in Australia.

Before the Belmont Stakes, Coolmore Stud purchased the breeding rights for Justify for $60 million, and after he won the Triple Crown there was another $15 million bonus paid. Potenially, they will breed him 250 times in his first year at stud for a fee of $150,000 per live foal. This is a record amount for breeding rights, passing the previous record of $70 million paid for the breeding rights for 2000 Kentucky Derby winner Fusaichi Pegasus.