The highlight of the Tampa Bay Downs racing season is the $400,000 Lambholm South Tampa Bay Derby (G2) at 1 1/16 miles on the main track. It is the major local prep for the Triple Crown series and worth 50 points to the winner as part of the Kentucky Derby Championship Series. Conditions were excellent at the Oldsmar oval, with 10,236 on hand under cloudy skies and temperatures in the low 70's, with the track fast and the turf course firm. Pasco Stakes winner World of Trouble was sent off as the 8-5 favorite in the field of 9. In to challenge him included 5-1 second choice Tiz Mischief, winner of the Holy Bull (G2), and 6-1 third choice Flameaway, winner of the Sam F. Davis (G3).

Jockey irad Ortiz Jr. sent World of Trouble to the front first time by and he set fractions of 24.54, 49.48, and 1:13.78 while pressed by 19-1 Quip and stalked by Flameaway. Entering the lane, World of Trouble continued to lead to the 1/8 pole through 1 mile in 1:38.32, but Quip, confidently ridden by Florent Geroux, drove on by to win by a length over Flameaway in 1:44.72. It was a neck back to favorite and pacesetter World of Trouble third. 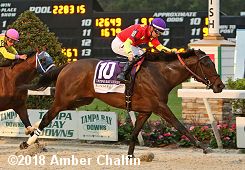 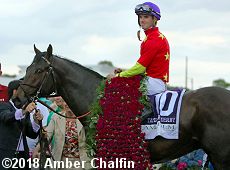 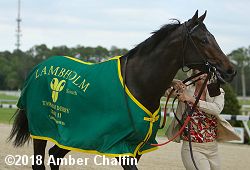 Left: Quip in the winner's circle. Winning trainer Rodolphe Brisset, celebrating his first graded stakes win said, "We won a lot of big races with the Mott team (as his assistant), and you learn how to handle the feeling. But maybe it's a little sweeter because it's in my name. On paper, it looked like we were going to be there early, and it was a matter of whether they were going to let us go (the half-mile) in 47 seconds or 49. I guess they let us go in 49, which was a little surprising to me. It was just a matter of him being fit enough; I'm not sure if we had him 100 percent, but he was fit enough to win today and that's the main thing."

Right: Quip heads back to the barn. Winning jockey Florent Geroux said, "I've always thought a lot of him," said Geroux. "The way the Jockey Club unfolded, he was between horses most of the time and he didn't really respond when I called him. But I've always known he had talent. Rodolphe rides him in the morning, and he said he was doing fantastic. It seemed like he handled the track very well. Both horses (Quip and World of Trouble) were doing great, and I'm glad to know Quip was best today." Elliott Walden, CEO of owner WinStar Farm added, "We knew he had a lot of talent after he won his first two races, but he got a little lost in the Kentucky Jockey Club. I'm not sure what's next; we're going to enjoy this one and go from there." 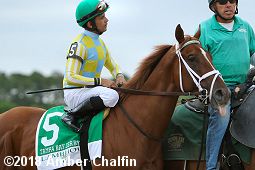 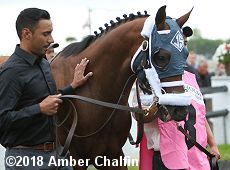 Left: Second place finisher Flameaway in the post parade. The 6-1 third choice stalked the pace in 3rd under Jose Lezcano then passd the tiring pacesetter to get second beaten 1 length. The Mark Casse trainee has a record of 5 wins, 1 second, and 0 thirds in 8 starts, earning $504,834 for owner John Oxley.

Right: Third place finisher and beaten favorite World of Trouble in the paddock. The 8-5 choice set the pace under Irad Ortiz Jr. but tired late to finish third beaaten 1 1/4 lengths. The Jason Servis trainee improved his record to 2 wins, 1 second, and 1 third in 4 starts, earning $199,400 for owners Michael Dubb and Bethlehem Stables. 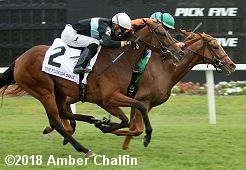 Immediately before the Tampa Bay Derby, a field of 11 three-year-old fillies went to post in the $200,000 Florida Oaks (G3) at 1 1/16 miles on the turf. Sweetest Chant (G3) winner Salsa Bella was sent off as the 2-1 favorite over 5-2 Altea, second in the Prix des Reservoirs Etalon Kendargent (G3) at Deauville, and 6-1 Almond Roca, winner of the Sandpiper and the Gasparilla.

19-1 Closer Still and 25-1 Jehozacat dueled for the early lead through fractions of 23.63 and 48.74 before jockey Daniel Centeno eased Jehozacat on the backstretch. Closer Still led the field into the turn through 3/4 in 1:12.87. Entering the lane, Closer Still tired badly as 8-1 Goodthingstaketime moved up to lead through 1 mile in 1:36.57. However, 13-1 Andina Del Sur, 9th early under Julien Leparoux, came out 3 wide into the lane and rallied to outfinish Goodthingstaketime by a head in 1:42.37. It was just a nose back to late-running Altea third, while favorite Salsa Bella raced 5th throughout and could not rally finishing 5th beaten 3 lengths. 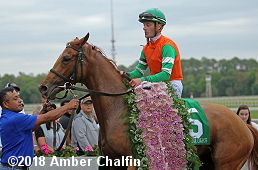 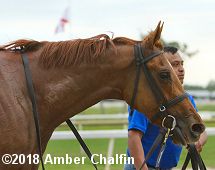 Left: Andina Del Sur in the winner's circle. Winning trainer Tom Albertrani said, "She's been knocking at the door her last couple of races and we noticed that she has really been galloping out strong. Her last race, she was maybe a little bit too keen for her own good, but today Julien had her relaxed and in the right spot and got the right trip."

Right: Andina Del Sur heads back to the barn. Winning jockey Julien Leparoux said, "We had a good pace in front of us and she settled very nice for me. I was able to get her out in the straight and she had a good kick. (Altea) came up on our outside, so that helped her to get going again. I don't think she's green, but she's still a baby the way she ran in the straight. I think she is going to improve a lot from today." 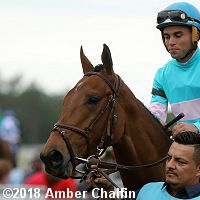 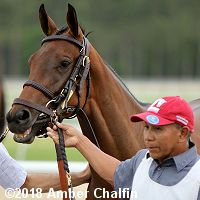 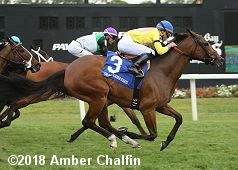 Kicking off the graded stakes trio was the $250,000 Hillsborough Stakes (G2) for older fillies and mares going 1 1/8 miles on the turf. Off Limits was the 2-1 favorite in the field of 10, winner of three straight, the Noble Damsel (G3), Athenia (G3), and Matriarch (G1). In to challenge her included 5-2 second choice La Coronel, second in the Endeavour (G3), and 7-2 third choice Fourstar Crook, third in the E.P. Taylor Stakes (G1). 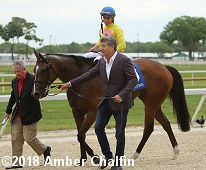 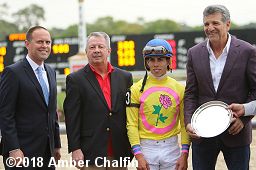 Left: Fourstar Crook heads to the winner's circle. Winning trainer Chad Brown said, "She prefers firm turf, and it was soft (at Woodbine) so I thought that was a good effort. She's a good mare and very consistent. She ran terrific today."

Right: The trophy presentation for the Hillsborough. Winning jockey Irad Ortiz Jr. said, "She broke so good and I just stayed on the rail to save all the ground I could, because I knew I had to have a good trip to beat this field. She is getting better and better every time. I just saved ground and when I tipped her out, she gave me a good kick at the end. When we got to the eighth pole I didn't know if we were going to get there, but I just kept riding my horse hard and she got the job done." 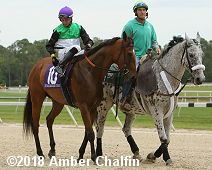 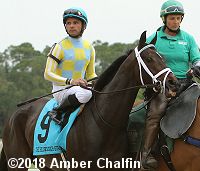 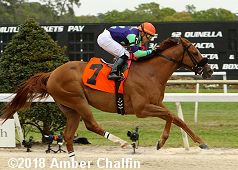 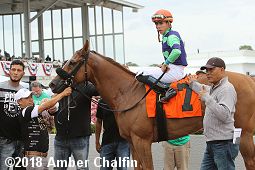 Winning jockey Irad Ortiz Jr. said, "When I asked him, he was full of run. I hit him once at the top of the lane and he just took off again." Winning owner John Guarnere added, "We knew he was the class of the race, and it looks as if this was everything we wanted to get him ready for the Charles Town Classic." Co-owner Glenn Ellis added, "We wanted to get a race before then, and this seemed like a good opportunity." 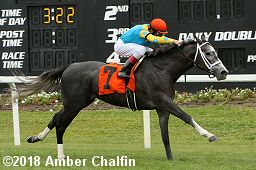 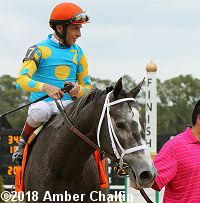 Winning jockey John Velazquez said, "I just didn't want to be the speed and duel head and head, and he allowed me to take him back enough (behind pace-setter Getyourmindright) where he was able to settle up the backstretch. After that, it was pretty easy. I let him run down the lane and he responded right away." Ginny DePasquale, assistant to trainer Todd Pletcher added, "He is one of my favorites, and I'm very happy with the way he ran. He has a great personality, he is very professional and he has a little speed, too, and that helps."