On Saturday, Magna Entertainment Corporation hosted the fourth annual Sunshine Millions, featuring eight stakes races for horses bred in California and Florida only with total purses of $3.6 million. Despite the restricted nature of the stakes, the races were very competitive with full fields for most. Unlike the first two years, the Florida-breds did not dominate as the California-breds won 5 of the 8 races, including the Classic at Santa Anita. The final score was 37 points for the Florida-breds with 35 for the Cal-breds, despite there being more Florida horses entered. 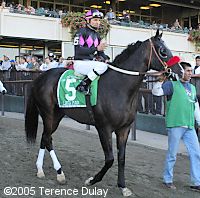 The main event of the Sunshine Millions is the $1 million Sunshine Millions Classic for older horses going 1 1/8 miles on the main track. 11-1 shot Proud Tower Too battled with 8-1 Trickey Trevor down the backstretch through a half in 44.84 and 3/4 in 1:08.69. Turning for home, 3-1 second choice Lava Man, who had stalked the pace in fourth the whole way, came out three wide and took the lead inside the 3/16 pole. Through the lane, he drew clear and easily held off the late charge of 12-1 shot Whos Crying Now to prevail by 2 1/4 lengths in a time of 1:49.98. It was 1 1/2 lengths back to 11-1 shot Texcess, who was 2 lengths ahead of 2-1 favorite Buzzards Bay in fourth.
Results Chart

Winning jockey Corey Nakatani said, "Our game plan was to come out running, make them commit, and that's what happened. It almost turned out like we drew it up. We wanted to make them run, make them commit to go by you, get to the outside and then put in a very nice run and that's exactly what happened." Trainer Doug O'Neill said that Lava Man would go next in the Santa Anita Handicap on March 4. 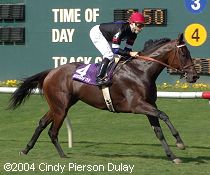 Eleven older fillies and mares traveled 1 1/8 miles on the turf course in the $500,000 Sunshine Millions Filly and Mare Turf. 8-1 shot Midwife and 16-1 shot Chamsil battled on the front end through 6 furlongs on 1:12.33, setting the race up for the closers. At the top of the lane, 6-5 favorite Moscow Burning, who had raced back in seventh early, came out four wide and rallied well, taking the lead inside the 1/8 pole to prevail by 1 1/2 lengths over 5-1 third choice Beneficial Bartok, in a time of 1:48.39. It was just a head back to 16-1 shot Chamsil in third.
Results Chart

Winning trainer James Cassidy said, "David (Flores) had me scared to death. I thought we were going to get trapped big time (down the backstretch). I think this is as good a race as she could have ever run, as much as she had to do, go wide and give away all that space. To be honest with you, I wasn't sure she was going to get up. This is fantastic, to have a mare like this. If she never ran again, this would be perfect." 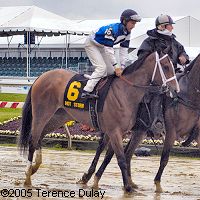 The Sunshine Millions Filly and Mare Sprint saw nine older fillies and mares sprint 6 furlongs for a $300,000 purse. Under jockey David Flores, 3-1 second choice Hot Storm went to the front and saved ground along the rail while dueling with 7-10 favorite Western Hemisphere to her outside. Turning for home, Hot Storm inched away and held off the favorite through the lane to win by 1 3/4 lengths in a time of 1:09.44. It was 2 1/2 lengths back to 10-1 shot Thrilling Victory in third.
Results Chart

Winning jockey David Flores said, "She broke well and I was expecting a lot more speed from the outside, but when my filly took the lead, she started looking around and nobody else was sending, so I was very comfortable. I was very pleased the first half-mile. On the middle of the turn I hit her just a little bit on the shoulder and she went right back on. I was very pleased. She's a very nice filly."

The $250,000 Sunshine Millions Dash featured eight 3-year-olds sprinting 6 furlongs on the main track. 6-5 favorite Da Stoops went right to the front after bobbling at the start, angled to the inside to save ground around the turn, and then easily powered away under a steady hand ride to win by 7 1/2 lengths over 14-1 shot Changing Weather, in a time of 1:08.04 over the fast track. It was another 1 1/4 lengths back to 15-1 shot Brite Maneuvers in third, while 5-2 second choice Plagiarist failed to fire and finished last. The final time was the second fastest at the distance for the meet.
Results Chart

Winning jockey Victor Espinoza said, "I thought it was going to be a little difficult because I had the one hole and there was a lot of speed in the race, but it set up quite well for me. I got lucky. I wanted him to break as sharp as he could but he kind of bobbled coming out of the gate, just a little bit, one or two jumps, he kind of lost his balance. After that it was no problem." Trainer Bob Baffert added, "He really trained well into this race. I was a little worried about (drawing) number one. He did stumble a bit out of the gate, but he's so athletic he recovered. About the 5/8 pole I knew we were in good shape. This colt's got some serious gears. He's really fast. He's the quickest Cal-bred I've ever trained."