The $700,000 Suburban Stakes (G2) features the top older horses of the east going 1 1/4 miles on the Belmont Park main track, in an early prep for the Whitney Handicap (G1), Jockey Club Gold Cup (G1), and ultimately the Breeders' Cup Classic (G1). Intermittent showers passed through the area but the main track remained fast and the turf courses firm wth temperatures in the low 80's. Breeders' Cup Classic (G1) 13th place finisher Catholic Boy was sent off as the 6-5 favorite in the field of 11 off his win in the Dixie (G2). In to challenge him included 4-1 second choice Preservationist, winner of 2 allowance races in a row and making his stakes debut here, and two horses at 8-1, Marconi and Rocketry, who finished in that order in both the Flat Out and the Brooklyn Invitational (G2).

Preservationist was quickest away through an opening quarter of 24.48 before jockey Javier Castellano sent Catholic Boy to lead down the back through a half in 48.09 and 3/4 in 1:11.69. Rounding the far turn, jockey Junior Alvarado took Preservationist through along the inside to gain the front through 1 mile in 1:35.68. Kept to task by Alvarado, Preservationist drew off through the stretch to win by 4 1/2 lengths in 1:59.99. It was another 3/4 length back to late-running 17-2 Pavel third. 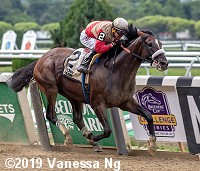 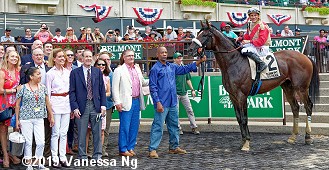 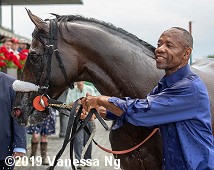 Left: Preservationist in the winner's circle. Winning trainer Jimmy Jerkens said, "He was there all the way for him. Junior [Alvarado] said he felt good coming down the backside. He was so nice and relaxed coming off of a big race, so I thought he'd be fit enough. He's got a lot of talent but he's got stamina too. He has a lot of quality all through his female family. Nice to see it all come together to pick up a graded stakes win here today."

Right: Preservationist heads back to the barn after the race. Winning jockey Junior Alvarado said, "My horse broke good, and I let him find his rhythm. He took the lead during the first part of the race and then Catholic Boy came on the outside - a little keen. I wasn't worried. I was trying to give a nice, confident ride to my horse. At the 5/16 pole, when it was time to pick it up, I asked him, and he was there for me. He gave me a nice run in the end." 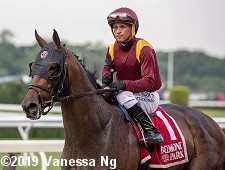 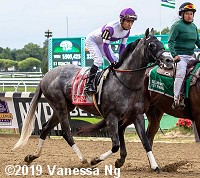 Left: Second place finisher and beaten favorite Catholic Boy returns after the race. Jockey Javier Castellano said, "He felt good. It was a good break. He didn't relax in the first part of the race, and I think that's what cost me the race."

Kicking off the stakes quintet on Saturday, the $250,000 Dwyer Stakes (G3) featured a field of 6 three-year-olds going 1 mile around one turn of the main track. Kentucky Derby (G1) third place finisher (placed second via DQ) Code of Honor was sent off as the 6-5 favorite over 5-2 Rowayton, an allowance winner last out, and 4-1 Mihos, 5th in the Holy Bull (G2).

Jockey Luis Saez sent 10-1 Majid to the lead exiting the chute through fractions of 23.83, 47.95, and 1:12.34 while pressed by 21-1 Whiskey Echo and stalked by 8-1 Final Jeopardy. On the far turn, jockey John Velazquez sent Code of Honor, last early, out 5 wide to sweep to the lead. Despite Velazquez losing his whip at the 1/16 pole, Code of Honor drew off under a hand ride to win by 3 1/4 lengths over Final Jeopardy in 1:35.81. It was another length back to Rowayton third. 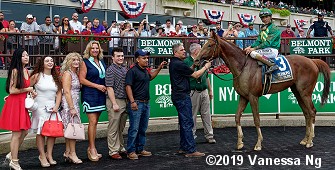 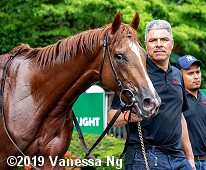 Left: Code of Honor in the winner's circle. Winning trainer Shug McGaughey said, "We were talking about how quiet he was in the paddock and then when I gave Johnny a leg up, he gets on his toes, goes to the post that way and then he breaks and he was there. I think that's exactly the way he wants to run; to just drop back out of it a bit and, depending on the pace, making one run like that. I thought he was a pretty easy winner today. Hopefully, we have a horse to come back with and we'll see what happens down the road. Hopefully, we can go through the summer and make our mark. We're looking for the Travers."

Right: Code of Honor heads back to the barn after the race. Winning jockey John Velazquez said, "He ran as we expected. I was behind the horse I expected to be. I went to go to the outside, and Jose [Ortiz, aboard Mihos] went to the outside, so I went back to the inside and he responded right away. Today, he put it all together the way we expected out of him. Hopefully, he can continue doing that going forward." 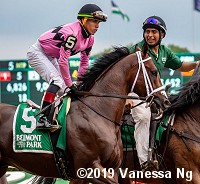 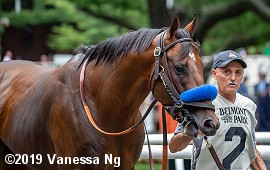 Left: Second place finisher Final Jeopardy in the post parade. Jockey Irad Ortiz Jr. said, "He ran so good. I don't have any excuse, we just got beat by a better horse. We were second-best today. He never gave up; it's just that the winner is a good horse, too. He gave me everything he had."

Right: Third place finisher Rowayton in the paddock before the race. The Don Chatlos trainee improved his record to 2 wins, 1 second, and 2 thirds in 6 starts, earning $215,630 for owner OXO Equine LLC.