The highlight race of the Turfway Park winter-spring meeting is the $500,000 Vinery Racing Spiral Stakes (G3), contested at 1 1/8 miles on the Polytrack. Conditions were excellent for this key Triple Crown prep, run just 6 weeks before the Kentucky Derby, with cloudy skies and temperatures in the mid 60's. A field of 12 three-year-olds went to post on Saturday afternoon, with Heavy Breathing sent off as the 2-1 favorite, undefeated in two starts, his debut and an allowance both at Gulfstream Park. In to challenge him included 4-1 second choice Handsome Mike, third in the El Camino Real Derby (G3) at Golden Gate, and 5-1 third choice Went the Day Well, who broke his maiden last out at Gulfstream.

Heavy Breathing was sent to the lead first time past the stands by jockey Javier Castellano, and he set fractions of 23.10, 46.98, and 1:11.86 while pressed by 10-1 Ill Conceived just to his outside. Entering the stretch, Went the Day Well, who was 4th early, circled the pacesetters and gained a short lead at the 3/16 pole, through 1 mile in 1:38.07. He drew off late to win by 3 1/2 lengths over late-runnng 26-1 Holiday Promise in 1:51.33 over the fast Polytrack. It was another length back to pacesetter and favorite Heavy Breathing third. 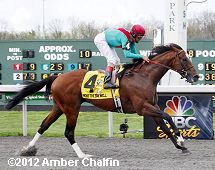 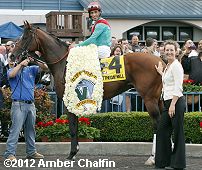 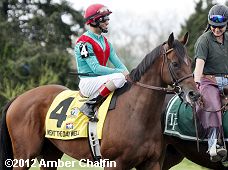 Left: Went the Day Well in the winner's circle. Trainer Graham Motion said, "I was very impressed with him. Apart from a little greenness (in the stretch) he couldn't have been better. When Animal Kingdom won this race last year, he was very explosive, but this horse was a little explosive, too. I hate to compare the two because they are such different horses. The beauty of (the timing of) this race is you have the option to run him one more time or not run more time. Probably the only option is the Lexington Stakes. I feel confident telling you this horse will run in the Kentucky Derby."

Right: Went the Day Well in the post parade. Jockey John Velazquez said, "When he got to the lead he started waiting (on other horses) and lugging in, and then (he switched leads and) just went on. He still doesn't know very much. You can tell; as soon as he pulled out at the 1/4 pole and he found himself on the lead, he didn't know what to do. So I just encouraged him to keep going forward. He did everything great today." 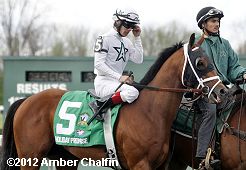 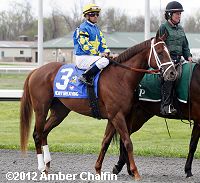 Left: Second place finisher Holiday Promise in the post parade. Trainer Todd Pletcher said, "I was very happy with how Holiday Promise ran. I think he handled the (Polytrack) real well. Elliott Walden (president, CEO, and racing manager of owner WinStar Farm) and I are discussing shipping him to Keeneland and possibly running him in the Blue Grass Stakes."

Right: Third place finisher and beaten favorite Heavy Breathing in the post parade. Trainer Todd Pletcher said, "I thought he held on very well considering the quick fractions, and I was pleased with his performance." 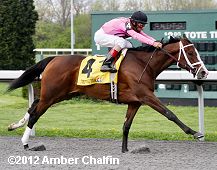 The distaff counterpart to the Spiral is the $100,000 Bourbonette Oaks (G3) for 3-year-old fillies going 1 mile on the Polytrack. In Lingerie, second in a Gulfstream allowance last out, was sent off as the 4-5 favorite in the field of 8 over 7-2 second choice More Than Love, winner of the Miesque (G3) at Hollywood before finishing a close second in the Florida Oaks at Tampa Bay, and 6-1 third choice Dancing Solo, off a 2nd place finish in an allowance at Gulfstream. 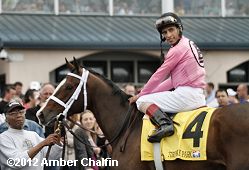 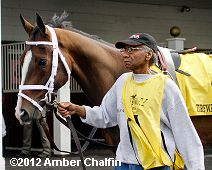 Left: In Lingerie in the winner's circle. Trainer Todd Pletcher said, "We were very pleased with the way she ran. It looked like she broke alertly and set some comfortable fractions, and she handled the track, so we're very pleased. She will come back to Palm Meadows on Tuesday and we’ll see how she comes back, and then I'll talk to (owners) Gary Barber and Aron Wellman and we'll come up with a plan for her."

Right: In Lingerie in the paddock before the race. Jockey John Velazquez said, "I was a little nervous before the race because she misbehaved at the gate last time in Florida but she popped out of the gate running and from there it was just a nice ride, just hold on to it. We went just as easy as you can go. She handled everything really well, and she loved the track." 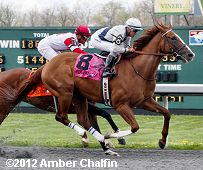 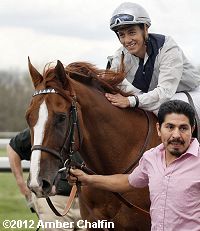 Flashy Dresser heads to the winner's circle. Winning owner Fred Seitz said, "When they went in 49 and 4/5th, I was surprised he wasn't on the lead, but (jockey Luis) Contreras has very good judgment. He doesn't get rattled; he's very calm. I think (Gung Ho) ran a huge race. There was nothing at Gulfstream. We were going to ship back home and all of a sudden it dawned on me Monday morning that this race made sense. He had trained very well on the Polytrack as a 2-year-old last April. The Blue Grass is three weeks away, and (Hansen) is going to be there. The most important thing is to wait and see how he comes out of this race and see how he's doing." 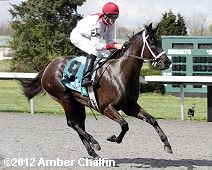 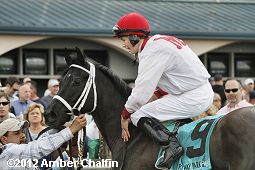 Hogy in the winner's circle. Winning trainer Joel Berndt said, "We chose Turfway because of the Polytrack. I knew he'd run well. He was training great and sitting on a big race. I trained him for the Arlington-Washington Futurity and he still ran fifth of 13, but I think the (one-mile) distance got to him. We'll keep him on Polytrack in the future, next time either something at Keeneland or Woodbine." Jockey Tanner Riggs added, "He was a little nervous in the post parade but it worked out real good. A few horses up front went a little bit (for the lead). I just tapped him on the shoulder early to keep his mind on running. At about the 2 1/2 furlong marker, he just started making his move."