The $2 million Obaiya Arabian Classic featured a field of 13 older horses go 2000 meters (about 1 1/4 mile) around one turn of the main track. Defending champion Tallab Al Khalediah was sent off as the 2-1 favorite. In to challenge him included 5-2 second choice RB Frynchh Dude and 5-1 third choice Jarif.

Tallab Al Khalediah set the pace along the inside while pressed by Salem Al Khalediah and stalked by RB Frynchh Dude and Jarif. On the turn Deryan slipped through to the lead chased by Mutawakel Al Khalediah. During the long stretch run, Mubasher Al Kalediah came out wide for room and rallied by to win by 1 1/4 length ove Mutwakel Al Khalediah in 2:16.44. It was another 1/2 length back to Hajres third. 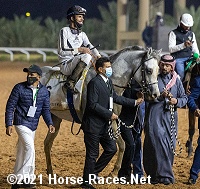 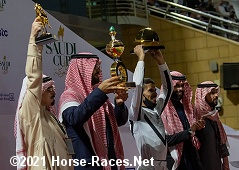 Left: Mubasher Alkhalediah heads to the winner's enclosure. Winning owner Prince Fahad said, "It means a lot to us; His Royal Highness Prince Khaled always wants to have the first in all races. We wish that the champ of last year won it this year; thank God we won this race with a Saudi jockey and got first and second places, which is a very good start to the year, and we hope to get better in the future."

Right: The trophy presentation for the Obaiya Arabian Classic. 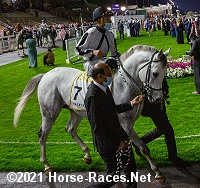 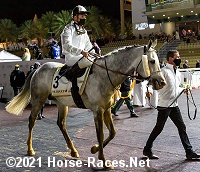 Left: Second place finisher Mutwakel Alkhalediah in the walking ring before the race. Jockey Eddie Castro said, "It was a nice race. My horse ran good. There are no excuses. I think maybe 2000 metres is a bit far for him. Maybe 1800 metres will be better for him."

Right: Third place finisher Hajres returns after the race. Jockey Cristian Demuro said, "He ran good. I think if the race was run over further, he would have finished second. Longer is better for him." 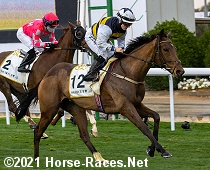 Kicking off Saudi Cup night was the $1 million Neom Turf Cup, a 2100 meter (about 1 5/16 mile) trip around 2 turns of the turf course for older horses. Channel Maker was sent off as the 4-5 favorite in the field of 12 off his 3rd place finish in the Breeders' Cup Turf (G1) after winning the Sword Dancer (G1) and Joe Hirsch Turf Classic (G1). In to challenge him included 3-1 second choice Tilsit, unraced since 4th in the Shadwell Joel Stakes (G2) in September, and 6-1 third choice True Self, winner of the Queen Elizabeth Stakes (G3) at Flemington in November.

Jockey Mickael Barzalona sent 16-1 For The Top to the lead first time by while pressed by Channel Maker and stalked by Emirates Knight and Tilsit. Turning for home, For The Top tired badly as Channel Maker inherited the lead, but True Self, midpack early under Hollie Doyle, wore him down late to win by 1 1/4 lengths in 2:10.57. It was a long 4 3/4 lengths back to Emirates Knight third. 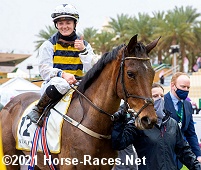 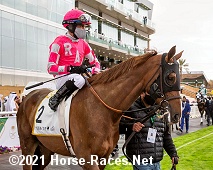 Left: True Self heads to the winner's enclosure. Winning jockey Hollie Doyle said, "It has been an incredible year, so it's great to get the new year off in a prestigious race such as this. I thought she was my best winning chance of the day, I watched all her performances and a step back in trip was a very clever move by Mr Mullins. They set a generous gallop the whole way round, but I managed to track them and got the splits up the straight. Willie said she's got one burst of speed and that's what she had."

Right: Second place finsher and beaten favorite Channel Maker in the walking ring. Jockey Joel Rosario said, "I mean it was good. The plan was to go to the lead and then he ran his race. I thought for a second I was going to get there and then the horse came with a strong run. He ran a big race. I got into Riyadh at one in the morning, everything was fine. I'm glad I made it here." 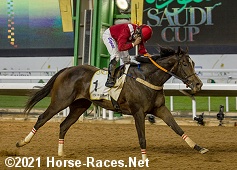 The $1 million Jockey Club Local Handicap is restricted to Saudi-trained older horses going the Saudi Cup distance of 1800 meters (1 1/8 miles) on the dirt. 18 of the originally drawn field of 21 went to post with Custodian of the Two Holy Mosques Cup winner Albathaly sent off as the 5-2 favorite over 4-1 Motakay'yef, 14th in that same prep race, and 5-1 Aqwee, 4th in the King Saud bun Abdulaziz Cup. Motakay'yef and 17-1 Aan Alawaan dueled for the lead exiting the chute and down the backstretch while stalked by 54-1 Badr Almoghtarrah and 38-1 Raaf. Turning for home Motakay'yef opened up on the field but Albathaly, midpack early under Wigberto Ramos, rallied by to win going away by 4 1/2 lengths in 1:50.76. It was another 1 1/4 lengths back to 51-1 Alaf'kham third. 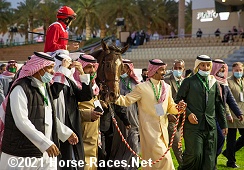 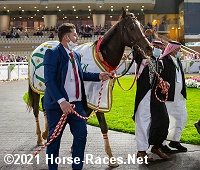 Left: Albathaly heads to the winner's enclosure with his numerous connections.

Right: Albathaly heads back to the barn in his new winner's blanket.