The $20 million Saudi Cup, run for the second time this year, is the world's richest horse race. A full field of 14 older horses contested this 1800 meter (about 1 1/8 mile) trip around one turn of the 1 1/4 mile dirt track at King Abdulaziz Racetrack in Riyadh. Although rain fell earlier in the evening, the feature and final race of the 8-race card was run under cloudy skies and temperatures in the mid 50's, with the main track fast and the turf course good. As expected, undefeated Charlatan was sent off as the 4-5 favorite off wins in the Arkansas Derby (G1) and Malibu Stakes (G1). In to challenge him included 3-2 second choice Knicks Go, winner of 4 straight including the Breeders Cup Dirt Mile (G1) and Pegasus World Cup (G1), and 8-1 third choice Tacitus, winless since the Suburban (G2) in July and 4th in the Breeders' Cup Classic (G1) last out.

Jockey Joel Rosario sent Knicks Go to the lead out of the chute but was quickly challenged by Mike Smith aboard Charlatan setting up a pace duel down the backstretch, the pair pressed by 45-1 Military Law and stalked by 19-1 Mishriff. Turning for home, Knicks Go tired as Charlatan opened up a short lead at the 3/16 pole. Mishriff moved out wide for room under David Egan to collar the favorite at the 1/8 pole. Passing the 1/16 pole Mishriff took over for good, and pulled away to win by a length in 1:49.59. It was a long 6 1/2 lengths back to late-running 105-1 Great Scot third.

This win catapulted Mishriff to number six on the all time earnings list.

Results Chart for the race from Jockey Club of Saudi Arabia which includes a link to the video replay. 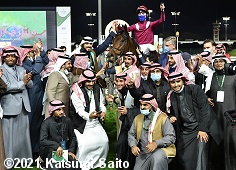 Mishriff in the winner's enclosure. Winning jockey David Egan said, "Unbelievable. I've been dreaming all my life of winning a race like this. Obviously it is the highest thing I will win for a while now; the Saudi Cup is the richest race in the world. Mishriff was always a horse who seemed to jump slow; maybe it was just through immaturity. Last year in the Saudi Derby he jumped slow behind the Japanese horse to finish second – I thought to myself that if he had jumped on terms he nearly would have won last year. But he's matured throughout the year and Mr. Gosden had him primed for today."

Right: The trophy presentation for the Saudi Cup. Ted Voute, representing owner Prince Faisal said, "He was raised on the farm, Prince Faisal bred him. I bought the sire Make Believe as a foal for him. He's bred the family all through the years and it means a lot to him. He was named after his best friend after he died. It's amazing." 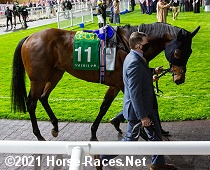 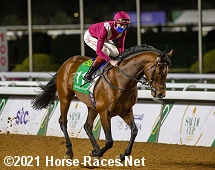 Mishriff in the walking ring. Winning trainer John Gosden said, "I think there are very few horses that can switch surfaces like that. I would have to say enormous thanks to the whole of the Saudi Jockey Club for putting on such an amazing day's racing. The turf track is superb – I was blown away by how good it was when it had only been laid down a few months before when I was there last year. And I have always been told by the top American jockeys and by Frankie Dettori that this is the best main dirt sand track in the world, and I think that is very much proven today that a turf horse can actually switch to it. "

Right: Mishriff in the post parade. Egan added, "My dad (John Egan) is helping out with the Bahrain horses and riding for Fawzi Nass in the mornings, so it is very special to have him here. If it wasn't for him I wouldn't be the rider or the person I am today. He's done everything he can to help me in my career, pushed me and trained me hard. This one's for him." 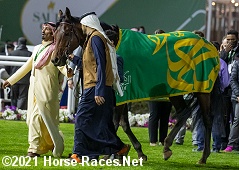 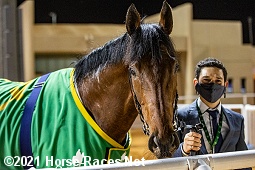 Left: Mishriff heads back to the barns in his winner's blanket. Gosden added, "He will stay. I think in the end he nailed them because he could go the pace and then see it out to the end, and that was a hard-run 1 1/8. We'll see. Thady (Gosden, son and assistant) will come back with his reports and we will discuss it all with Prince Faisal and take it a step at a time after a flight like that and training through the winter. We'll see how he is when he gets back before we make any grand plans."

Right: Mishriff at the test barn after the race. 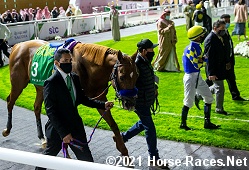 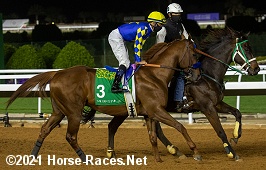 Left: Second place finisher and beaten favorite Charlatan in the walking ring. Jockey Mike Smith said, "He's just so lightly raced this year and the way the racetrack was playing all day, I got a little concerned because speed wasn't holding all day long. He's only ran once and it was a seven-eighths race. He got really tired. If he'd had two races, I think he'd win." Trainer Bob Baffert added, "I was very proud of his effort. Going in, we thought he would run his race. Turning for home, we knew they were going pretty fast early. He's a fast horse, but that stretch – I'm glad we don't have any stretches like that in America."

Right: Charlatan in the post parade. Co-owner Tom Ryan said, "I think he ran a very brave race. It's a very long stretch and he got ran down on the wire. After this, we'll look to getting ourselves home and then talk to Bob and the team in the coming days and decide what we'll do." 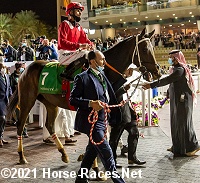