The $1.86 million Obaiya Arabian Classic featured a field of 14 older horses go 2000 meters (about 1 1/4 mile) around one turn of the main track. A full field of 14 went to post with 2018 Dubai Kahayla Classic (G1) and 2019 Prince Sultan International Cup winner Tallaab Al Khalediah sent off as the 4-1 favorite over 9-2 Ziyadd, winner of the Al Maktoum Challenge Round 2 (G1), and 5-1 Hajres, 2nd in the Pris Haras de Gelos in France. 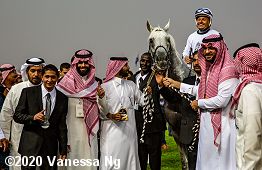 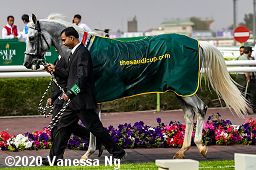 Left: Tallab Al Khalediah in the winner's enclosure. Winning owner Prince Fahad said, "He doesn't like to stay in the back. He always keeps going in the front. That is how he won in Dubai, that's how he won everywhere. We were just a bit afraid because of his injury, but he has proven himself today. More than being confident, I think we had a lot of pressure to keep the Al Khalediah name up and that was the most pressure. He ran last time in March and thank God it makes us feel so much better and we are now looking forward to going to Dubai once again. I hope he can run again in the Dubai Kahayla Classic. I think it is a historical day for horse racing in Saudi Arabia and a historical day in the racing world whether it is in Saudi Arabia or not."

Right: Tallab Al Khalediah heads back to the barn after the race. Winning jockey Roberto Perez said, "We made a plan last night for this race. I know that horse, I have ridden him like 10 times. I know when I worked the horse the last two times, I knew he was going to fight, that he had a great chance to win. He hasn't run in a long time, not since Dubai. It is a long time, but he has too much class. He is a very good horse. This is a good race to win and I would like to thank everyone for giving me the opportunity to ride him, the Prince, the trainer, everyone." 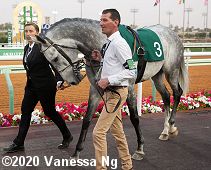 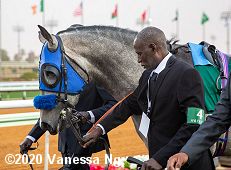 Left: Second place finisher Hajres in the walking ring before the race. Jockey Christophe Soumillon said, "He jumped out really well. I was lucky to be just behind the winner. On the turn he was really off the bridle. I thought he'd have trouble to finish the last 400 (metres) but he kept going the whole way and finished second. He was really tough today and quite lazy, but he's a really nice horse We got beat by the best (Arabian) horse in the world. I was really lucky to be on his back today and I'm proud to see we did a great performance."

Right: Third place finisher Mashtur Al Khalediah in the walking ring. Jockey Jean-Bernard Eyquem said, "He ran perfectly but the race was too long for him." 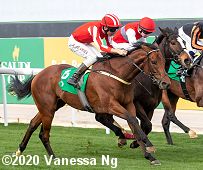 Kicking off Saudi Cup night was the $1 million Mohamed Yousuf Naghi Motors Cup, a 2100 meter (about 1 5/16 mile) trip around 2 turns of the turf course for older horses. After Persian Moon scratched, Hong Kong Vase (G1) fourth place finisher Deirdre was sent off as the 3-10 favorite in the field of 8 over 3-1 Mount Everest, 14th in the Hong Kong Vase after finishing 6th in the Breeders' Cup Turf (G1), and 11-1 Royal Youmzain, unraced since 6th in the Preis Von Europa (G1) in September.

Jockey Mickael Barzalona sent 16-1 For The Top to the lead first time by while pressed by 23-1 Trais Fluors and stalked by Mount Everest. Turning for home, For The Top continued to lead but 40-1 Port Lions, last early under Adrie de Vries, came out for room to challenge. Port Lions and Deirdre battled to the line with Port Lions prevailing by a head in 2:11.41. It was another 1/2 length back to For The Top third. 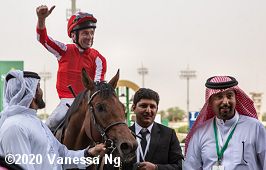 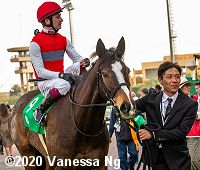 Left: Port Lions in the winner's enclosure. Winning trainer Fawzi Nass said, "It feels absolutely amazing to win the first turf race here in Saudi Arabia. Of course, we came here with some hope but to actually accomplish that is amazing. He missed the break quite badly, which didn’t help but obviously we know he’s got a very nice turn of foot. I wasn’t sure if he could do that from so far back off a slow pace but obviously he managed. He has just improved and improved. He’s a proper fast ground horse and has done very well since he came to Bahrain." Jockey Adrie de Vries added, "We came here a little bit underestimated but our only worry was the trip as it was the furthest he has ran. He missed the kick, I wanted to sit last but maybe not that far. He settled and he’s got a great kick. We almost hit the front too soon. It’s just amazing for the connections. The track is beautiful. I can’t believe in such a short time they were able to make it; it was a dream to ride on. It feels amazing to win. I knew we would run well but I wasn’t sure if we could beat the Japanese filly. It is just a great feeling."

Right: Second place finsher and beaten favorite Deirdre returns after the race. Jockey Oisin Murphy said, "No excuses. She jumped well, she travelled good. Everything went well except we didn’t win. We got into the right position and on form we would have won easily. It happens, sometimes. The track was very nice and I think they did a great job." Murphy was handed a 2 day suspension for excessive use of the whip. 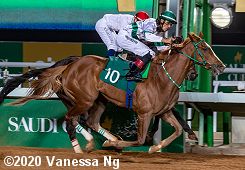 The $500,000 Jockey Club Local Handicap is restricted to Saudi-trained older horses going the Saudi Cup distance of 1800 meters (1 1/8 miles) on the dirt. King Faisal Bin Abdulaziz Cup (G1) winner Alnajim Albaaher was sent off as the 2-1 favorite over 4-1 Ala Sawab, 2nd in the Custodian of the Two Holy Mosques Cup (G1), and 11-2 Omsiyaatee, winner of an apprentice handicap last out. Jockey Luis Morales sent 33-1 Waqoor to the lead while pressed by 20-1 Median and stalked by Ala Sawab and 16-1 Maroof. Turning for home, Omsiyaatee, unhurried early under Adel Alfouraidi, came out for room to take over the lead inside the 1/16 pole. Be Azn Allah tried to rally late but Omsiyaatee held him off to win by 1/2 a length in 1:51.54. It was another 2 lengths back to favorite Alnajim Albaaher third. 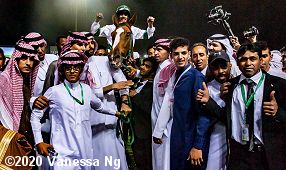 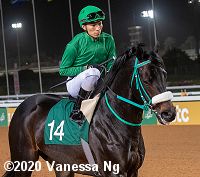 Left: Omsiyaatee in the winner's enclosure with his numerous connections.