The feature race on Sunday at Saratoga was the $1 million Saratoga Derby Invitational for 3-year-olds going 1 3/16 miles on the Mellon turf course, the second leg of NYRA's new Turf Trinity, which started with the Belmont Derby Invitational (G1) and ends with the Jockey Club Derby on September 7 at Belmont. Conditions were excellent with a fast main track, firm turf courses, sunny skies, and temperatures in the mid 70's. Prix du Jockey Club (G1) 6th place finisher and Belmont Derby 3rd place finisher Rockemperor was sent off as the 5-2 favorite in the field of 11. In to challenge him included 9-2 second choice Digital Age, 4th in the Belmont Derby after winning the American Turf (G2), and 5-1 third choice Social Paranoia, 2nd in the Belmont Derby. 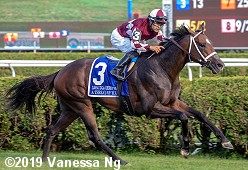 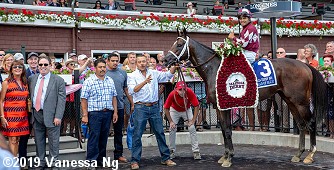 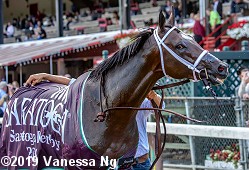 Left: A Thread Of Blue in the winner's circle. Winning trainer Kiaran McLaughlin said, "Just like it looked it could work out on paper. [An] uncontested lead is big, and he's a very talented horse. He likes it firm, obviously, winning three in Florida. He doesn't like to ship that well, but he ran great at Churchill. [The] Penn [Mile] just didn't go well. We gave him a little more time going into this, but he's been training unbelievable and it just worked out great. We talked about three different races in eight days: the Hall of Fame, the Arlington Secretariat, and this race. We just kept landing back on this race, after talking to [owner Leonard] Green and his son, Jonathan. We didn't have to go anywhere and we might get an easier lead going further. Going a mile they are going to be pressing more, so it just worked out great.

Right: A Thread Of Blue heads back to the barn after the race. Winning jockey Luis Saez said, "In a big race, you never know, but we were lucky that it was pretty easy up front. When we came into the stretch, I knew I had plenty of horse. I saw them coming, but he responded pretty well. It was easy for him today. The other day I had to put him into the race because there was a little more speed." 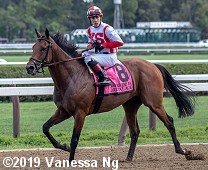 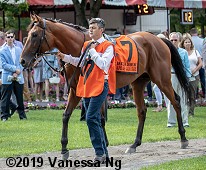 Left: Second place finisher Digital Age returns after the race. Jockey Irad Ortiz Jr. said, "They slowed down on the backside, in the second part of the race, and when they slowed down I think that was when I got beat. [But] he was coming."

Right: Third place finisher Cape of Good Hope in the paddock. Jockey Julien Leparoux said, "We had a good trip. A little bit back, but we saved ground around both turns. We made a nice run in the second turn and came flying to finish third. I thought it was a good effort. The track is speedy, so the way he likes to run is probably not the best, but he ran a great race. For him, the further the better and maybe even a little cut in the ground." 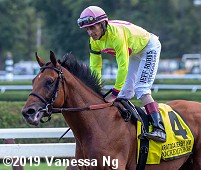 The $200,000 Fasig-Tipton Waya Stakes (G3) featured a field of 6 older fillies and mares going 1 1/2 miles around 3 turns of the inner turf course. Sheepshead Bay (G2) winner Santa Monica was sent off as the 6-5 favorite over 3-1 second choice Fools Gold, 2nd in the River Memories, and 7-2 third choice Gentle Ruler, winner of the R.G. Dick Memorial (G3). 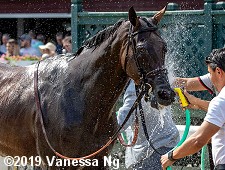 Left: Fools Gold in the winner's circle. Winning trainer Chad Brown said, "I told Javier if she breaks out of there good, we're happy to go to the lead. I didn't see a lot of speed in the race, but if somebody was fully intent on making the fractions just to lay second; that's what he did. Javier decided to back off when Joel [Rosario aboard Sky Full of Stars] took the initiative, and he just timed it perfectly. I'm so proud of her development. She's progressed all season and now she's a player in this division. I think her last race at Belmont was the final piece of work she needed to handle the mile and a half and the mile and a half here at Saratoga."

Right: Fools Gold gets hosed off after the rae. Winning jockey Javier Castellano said, "The filly put up a great performance going a mile and a half last time at Belmont [second in the River Memories]. I think the mile and a half adjustment helped her out today. Mr. Brown did a great job with the horse, bringing her to Saratoga to win the race." 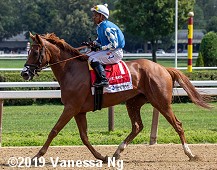 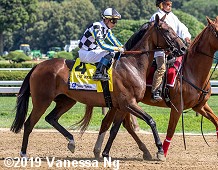 Left: Second place finisher Get Explicit returns after the race. Trainer Barbara Minshall said, "She ran a great race. We sent her thinking she'd run a good race, and Ricardo Santana really couldn't have given her a better ride. She's an honest filly and she really ran well. She really dug in against a good group of fillies. We'll probably bring her back for the Glens Falls."

Closing out the stakes action on Whitney weekend was the $200,000 Adirondack Stakes (G2) for two-year-old fillies sprinting 6 1/2 furlongs on the main track. Debut winner Frank's Rockette was sent off as the 7-10 favorite in the field of 8 over 9-4 second choice Magic Dance, winner of the Debutante, and 13-2 third choice Perfect Alibi, 2nd in the Astoria. 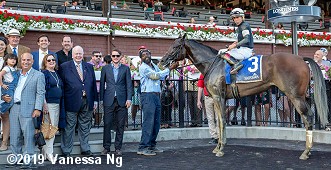 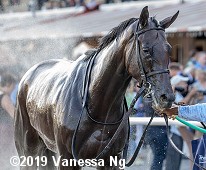 Left: Perfect Alibi in the winner's circle. Winning trainer Mark Casse said, "This filly is funny because in the morning when she breezes. You wouldn't know she's anything. She'll go a half in 50 and it's like she's giving you everything. I was a little surprised she broke her maiden the way she did so easy. I told Mr. Farmer, 'I can't tell you not to run her, I can't tell you to run her.' She's a little bit like Sir Winston. When he gallops out, he shows you something. Good thing about Mr. Farmer is he's not afraid to lose. Sometimes, you have to run them. This is why you run them, because if you watched her train the past couple of weeks you would think she wouldn't be any good. I would think she would probably comeback in the Spinaway. I think going farther will be better for her."

Right: Perfect Alibi gets hosed off after the race. Winning jockey Irad Ortiz Jr. said, "I had a good trip. I broke running because she's that kind of filly. She has a nice stride. I got a good position on the turn and I just had my hands down and relaxed. Turning for home, [Magic Dance] was on the outside, so I didn't want to make a premature move and try to get through because it looked like [jockey Ricardo] Santana had a lot of horse, so I just waited. They didn't keep a straight [path], so I got through in between the horses and she responded really well. Mark is the type of trainer that doesn't put too much pressure on you, so I just had to be patient and ride her with confidence. I think she's learning race by race. She's going to get better down the road." 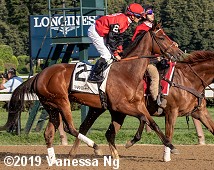 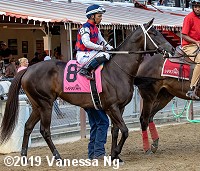 Left: Second place finisher and beaten favorite Frank's Rockette in the post parade. Jockey Julien Leparoux said, "The plan was to sit behind the speed, and we got that the first part. Even though I was inside, I could move anytime. Coming to the quarter pole, [Just Fly] came out and I had plenty of room, so I just tried to go in there and it just closed on me and we got bumped. She ran a great race. If that doesn't happen, she probably wins."

Right: Third place finisher Magic Dance heads out to the track before the race. The Steve Asmussen trainee improved her record to 2 wins and 1 third in 3 starts, earning $154,023 for owner-breeder Three Chimneys Farm.

The first stakes race on Sunday was the $100,000 John Morrissey Stakes for New York-bred older horses sprinting 6 1/2 furlongs on the main track. 8-5 favorite Gold for the King was loose on the lead under Joel Rosario through fractions of 22.79 and 45.70 while pressed by 3-1 Eye Luv Lulu and stalked by 15-2 T Loves a Fight. Gold for the King continued to lead through 3/4 in 1:09.33 but 11-2 Celtic Chaos, 4th early under Dylan Davis, came out 7 wide to win by a nose over late-closing 5-2 second choice Build to Suit in 1:15.45. It was a length back to favorite Gold for the King third. 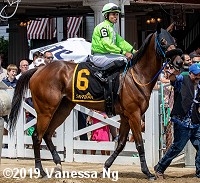 Left: Celtic Chaos in the winner's circle. Winning trainer Brad Cox said, "I honestly didn't think he got there, but the with a photo, you've got a shot, and then they put his number up. It was good. Dylan did a great job riding him. He put him in a great position. He's put him up in the race a little closer the last couple races and it's worked out really well. I'm very proud of him."

Right: Third place finisher and beaten favorite Gold for the King heads out to the track before the race. The Charlton Baker trainee improved his record to 7 wins, 4 seconds, and 6 thirds in 23 starts, earning $713,959 for owner-breeder Francis Paolangeli.