The feature race on the first Saturday of the Del Mar summer meet was the $200,000 San Diego Handicap (G2) for older horses at 1 1/16 miles on the main track. Conditions were excellent at the seaside oval with suny skies and temperatures in the low 70's. After 2 scratches, last year's winner Catalina Cruiser was sent off as the 1-10 favorite in the field of 4 off his win in the True North (G2). In to challenge him included 5-1 second choice Core Beliefs, 6th in the Gold Cup at Santa Anita (G1), and 9-1 third choice Draft Pick, an allowance winner last out. 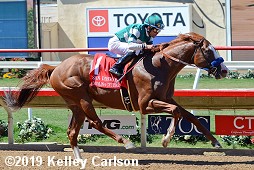 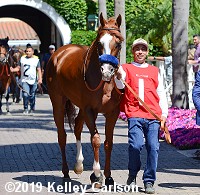 Left: Catalina Cruiser in the winner's circle. Winning trainer John Sadler said, "The objective of the other jockeys was obviously to press the pace. But he was running smooth all the way. When you're 1-to-9 there's a lot of conversation about style points and things like that, but he was comfortable all the way. The fractions were slow, but this is not a fast track. We'll check the speed figures and things and we'll see how he comes out of it and decide whether to run in the Pacific Classic or not. We've got options."

Right: Catalina Cruiser heads into the paddock before the race. Winning jockey Joel Rosario said, "I'm sure glad to be here today (his normal racing venue – Saratoga – was closed due to excessive heat), and especially to ride a nice horse like this. He was comfortable out there. He didn't mind that horse next to him. When it came time to go, he just went ahead and did his job. He's a pro." 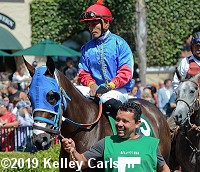 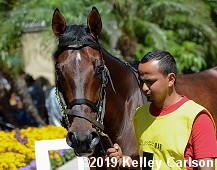 Left: Second place finisher Mongolian Groom in the paddock before the race. Jockey Abel Cedillo said, "We gave it a try late, but that horse (Catalina Cruiser) is just too tough."

Right: Third place finisher Draft Pick in the paddock. Jockey Martin Garcia said, "My horse is a really good horse and he tried hard today. But the winner is a monster."


The $200,000 San Clemente Stakes (G2) featured a field of 10 three-year-old fillies going 1 mile over the Jimmy Durante Turf Course. California Cup Oaks winner Mucho Unusual was sent off as the 5-2 favorite. In to challenge her included 11-4 Keeper Ofthe Stars, winner of 3 straight allowances, and 4-1 Maxim Rate, 5th in the Honeymoon (G3).

Jockey Jorge Velez sent 69-1 longest shot Devils Dance to the lead first time by through fractions of 22.72 and 46.50 while pressed by 63-1 Harmless and stalked by Keeper Ofthe Stars. On the backstretch Harmless moved up to lead through 3/4 in 1:10.84 before tring. Apache Princess, 9th early, took over midstretcch through 7f in 1:22.80 but Mucho Unusual, last under Joel Rosario for the first 3/4 mile, came out 5 wide into the lane and rallied to win by a neck in 1:34.66. It was another 3/4 length back to 17-2 Over Emphasize third. 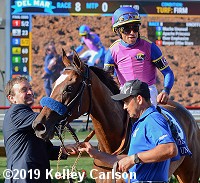 Left: Mucho Unusual in the winner's circle. Winning trainer Tim Yakteen said, "I left it up to Joel, but I was just as surprised as everybody else that she was as far back as she was. She was doing really well and I conveyed that to Joel in the paddock. We're really pleased with her effort. Things have been going according to plan and this is one industry where that doesn't often happen. The prep race at Santa Anita set her up well for this and this should set her up well for the (Del Mar) Oaks."

Right: Mucho Unusual returns after the race. Winning jockey Joel Rosario said, "She just didn't show me a lot (of speed) early, so I let her do her thing away from there. On the backside, she wanted to go, so we went after them. Turning for home I thought about going down inside, but she was making up ground and I didn't want to chance it. She had that nice acceleration through the stretch and we got it. I love it here at Del Mar." 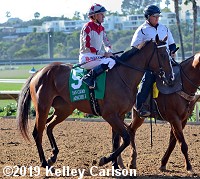 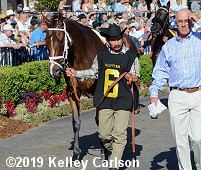 Left: Second place finisher Apache Princess in the post parade. Jockey Kent Desormeaux said, "I was on a nice horse and I moved too soon. It's on me."

Right: Third place finisher Over Emphasize in the paddock before the race. Jockey Alonso Quinonez said, "She put in a good try." 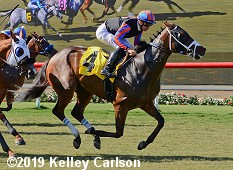 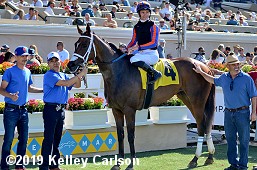 A field of 9 older fillies and mares contested the $85,000 Daisycutter Handicap at 5 furlongs on the turf. 8-1 Kentan Road was quickest away through an opening quarter of 22.48 while pressed by 5-1 Painting Corners and stalked by 6-5 favorite S Y Sky. Entering the stretch, jockey Flavien Prat sent Painting Corners to lead through a half in 44.84. Kept to task by Prat, Painting Corners held off S Y Sky by 3/4 length in 56.21. It was another 1/2 length back to 16-1 Just Grazed Me third.