The major California prep race for the Triple Crown is the $1 million Santa Anita Derby (G1) for 3-year-olds going 1 1/8 miles over the Santa Anita main track just 4 weeks before the Run for the Roses, and worth 100 points to the winner as part of the Kentucky Derby Championship Series. Conditions were excellent for the 39,023 fans at the historic Arcadia oval, with partly cloudy skies and temperatures in the mid 70's. A field of just 7 went to post for the 81st renewal of the historic race, with Justify sent off as the 9-10 favorite, undefeated in just 2 career starts and making his stakes debut here. In to challenge him included 11-10 second choice Bolt d'Oro, third in the Breeders' Cup Juvenile (G1) then winner by disqualification of the San Felipe (G2), and 11-2 third choice Instilled Regard, winner of the Lecomte (G3) but third in the Risen Star (G2).

Jockey Mike Smith sent Justify to the lead rightat the start and he set fractions of 23.96, 47.85, and 1:12.61 while as many as 3 lengths in front of Bolt d'Oro stalking him second and 41-1 Core Beliefs sitting third. Entering the lane, Justify drifted out away from Smith's left handed whip, allowing Javier Castellano to send Bolt d'Oro to challenge down on the rail through 1 mile in 1:37.02. However, Smith kept Justify on task and the favorite dismissed Bolt d'Oro late to win by 3 lengths in 1:49.72. It was a long 6 1/2 lengths back to Core Beliefs third. 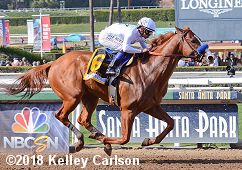 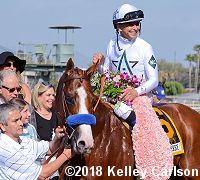 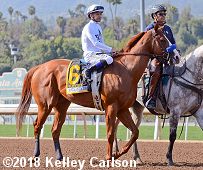 Left: Justify in the winner's circle. Winning trainer Bob Baffert said, "But Justify is just a natural and he's just learning how to run. He has that big, beautiful stride . . . he reminds you a lot of Point Given, just a big, red train type of horse. He's quick and he's light on his feet. It's just good that he showed up, he did what we thought and were hoping he was going to do. I just feel fortunate to have him. It takes a lot of the sting out of what happened to McKinzie. It's a tough business but we've just got to keep going."

Right: Justify in the post parade. Winning jockey Mike Smith said, "He rides with room to grow. He's learning and it's the first time he rides with the infield open, I don't know if he saw the umbrellas and everyone screaming that he got to looking at them so much that I had to get the bit out of his mouth to really make him pay attention and that's when he kind of skirted away and focused. What you're seeing right now is really just raw talent. He's got so much room to grow and to even get better, believe it or not. I think this race is going to put a lot more bottom into him. He handled a 1 1/8 really well and like I said what you're seeing right now is just raw talent. If he moves forward off of this race, which he should, then it's even kind of scary to talk about." 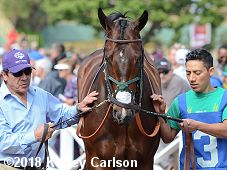 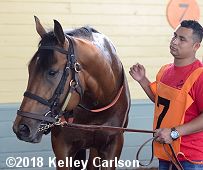 Left: Second place finisher Bolt d'Oro in the paddock. Owner-trainer Mick Ruis said, "I didn't think the fractions were real, real fast. I think it was a good race and was what we needed. Hopefully we come out of here really good and get that 1 1/4 miles. We knew we were up against it a little at 1 1/8 and that we would have an advantage when he goes a little longer. This is a good steppingstone – we were within two lengths of the winner, so this is one we can build off and go to Churchill Downs." 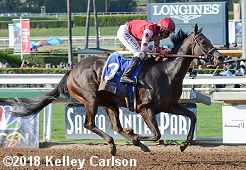 The $400,000 Santa Anita Oaks (G1) featured a field of nine 3-year-old fillies going 1 1/16 miles with the winner earning 100 points as part of the Kentucky Oaks Championship Series. Santa Ynez (G2) and Santa Ysabel (G3) winner Midnight Bisou was sent off as the 3-5 favorite over 7-2 Spectator, an allowance winner last out after finishing 3rd in the Del Mar Debutante (G1), and 6-1 Thirteen Squared, 2nd in the Santa Ysabel.

Jockey Tyler Baze sent Thirteen Squared to a clear lead through fractions of 23.47, 47.63, and 1:12.04 while stalked by 22-1 We All Have Dreams and Spectator. Entering the stretch, jockey Mike Smith sent Midnight Bisou, 8th early, 3 wide and she rallied past the tiring pacesetter through 1 mile in 1:38.02. Kept to task by Smith, Midnight Bisou drew off to win by 3 1/2 lengths over Spectator in 1:44.79. It was another 3 1/2 lengths back to Thirteen Squared third. 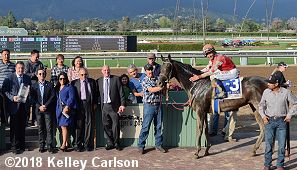 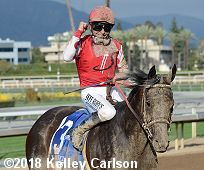 Left: Midnight Bisou in the winner's circle. Winning co-owner Jeff Bloom (front row, second from left) said, "I am shaking. I'm speechless. I just won the Grade 1 Santa Anita Oaks. I think she is the best filly in the country. I know this much, she's a good one. Mike looked like he was very comfortable with her where he was and when he started asking her, I could see that she started motoring and I felt pretty good. I don't even know how I feel about The Kentucky Oaks because you don't think of it that way until you do. But now it's a reality and I'm living it, enjoying it and pinching myself constantly."

Right: Midnight Bisou returns after the race. Winning jockey Mike Smith said, "She's special, I'm telling you. Although she was probably a little farther back than anyone expected. I'm not going to compare it to riding Zenyatta, but I used to be way back there and I wasn't worried because I knew that she could catch them. She gives me that great turn of foot, and I want to give her something to run at or she'll put the air brakes on. (Coming out of the gate) she set me in the rumble seat. I had to get back on her for a jump." 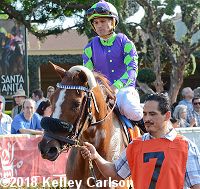 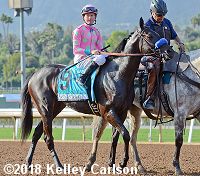 Left: Second place finisher Spectator returns after the race. The Phil D'Amato trainee improved her record to 3 wins, 1 second, and 1 third in 5 starts, earning $303,200 for owner-breeder Rick and Sharon Waller. 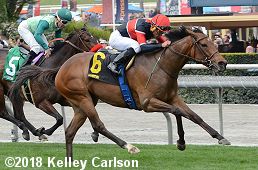 The $150,000 Providencia Stakes (G3) featured 3-year-old fillies going 1 1/8 miles on the turf. El Camino Real Derby winner Paved was sent off as the 7-5 favorite over 9-5 Ms Bad Behavior, winner of the China Doll, and 13-2 Pulpit Rider, winner of the California Cup Oaks. 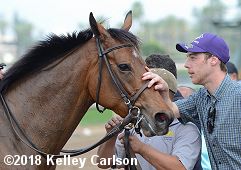 Left: Fatale Bere in the winner's circle. Winning trainer Leonard Powell said, "The key was the first part of the race. Joel did a great job by getting her to relax and when she's like that she's got a huge turn of foot."

Right: Fatale Bere after the race. Winning jockey Joel Rosario said, "Leonard just told me to just let the horse relax. Those were my only instructions. I just found a good spot, had him relax and let the horse do the rest. He started to pick it up on the turn and had a great burst of speed to overtake the other two. It's nice to be back home. This is where I started and I'm just thankful for the opportunity to return with a chance to win." 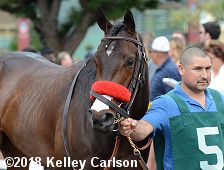 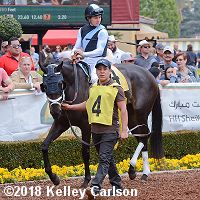 Left: Second place finisher Ms Bad Behavior in the paddock. Jockey Kent Desormeaux said, "She ran through the wind – I don't know how this horse beat me. True congratulations to the winner, because I was flying. I'd like to know what the Trakus numbers were the last quarter. I guarantee you I was doing 23 – she had to run 22 and change. That's hard to beat. Congratulations to the winner, because I was rolling."

Right: Third place finisher and beaten favorite Paved in the paddock. Jockey Drayden Van Dyke said, "I wish we could've been covered up, but on paper, it looked like we'd be a little closer. She was in relaxed-chase mode and she ran okay, but she's better off when she can get back off the pace." 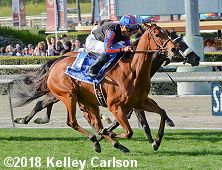 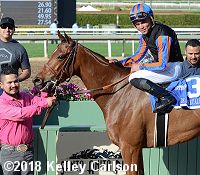 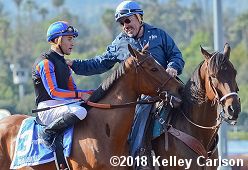 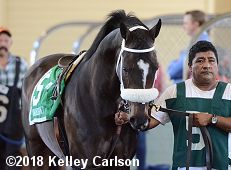 Left: Beau Recall in the post parade. Winning trainer Simon Callaghan said, "I was worried when they went pretty slow in front. We were hoping for some hot fractions, but she's just got such a turn of foot and a real big heart. She's small in physique, but she's such a tough filly. She deserved it. She had been running so many good races and just coming up short. She really deserved it today."

Right: Second place finisher Thundering Sky in the paddock. Jockey Rajiv Maragh said, "She ran great. They got the jump on me around the turn, but I had to wait. I wanted to wait to the last minute for her to make her run. She finished really good. I don't think she saw the winner." 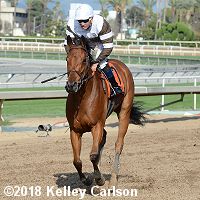 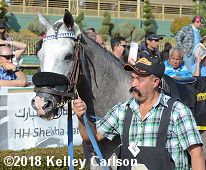 Left: Third place finisher Madame Stripes returns after the race. Jockey Kent Desormeaux said, "We didn't get any help up front. That 24.0 in the first quarter were pedestrian. Normally we are 12 lengths back, but they were going so slow, I was out front. It turned into a sprint the last 3/16 and that is not her cup of tea. She could have gone around again. I thought she was phenomenal today under the circumstances."

Right: Fourth place finisher and beaten favorite Enola Gray in the paddock. The Phil D'Amato trainee has a record of 7 wins, 2 seconds, and 1 third in 12 starts, earning $585,100 for owner-breeder Nick Alexander. 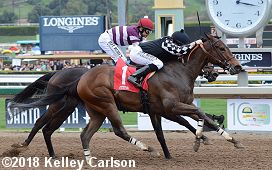 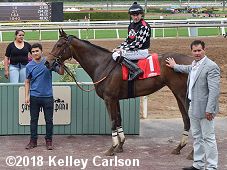 Winning jockey Joe Talamo said, "Drawing the rail, she has a little speed but Brian didn't really want to get in a speed duel so the tactic was really to just sit behind the pace. It's funny how a plan works out. It worked out good for us. At the quarter pole I was able to angle around and she did her thing down the lane." Trainer Brian Koriner added, "I thought the favorite would be able to do anything she wanted from the outside and that she'd be tough to beat. My filly handled the rail well, she took the dirt in her face very well. She was very professional." 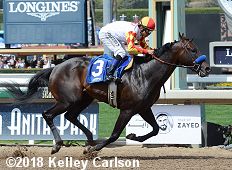 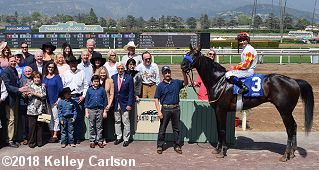 Winning trainer Bob Baffert said, "I shouldn't have run him back in that turf race going long. But he came out of it well. I took the blinkers off (today). Last time in the paddock he never relaxed. He used himself up last time. He came into this race really nice, he was relaxed, he was a gentleman today. He's a race horse." Jockey Mike Smith added, "Equipment change and surface change – and they both worked extremely well. He was so uptight last time (with blinkers), and he was much more relaxed and better today – on the muscle, but much better. I like him better on the dirt, too." 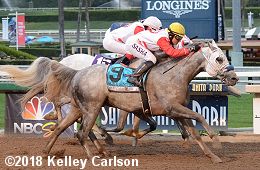 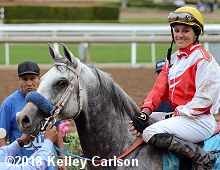 Winning trainer Jerenesto Torrez said, "It feels great – that's why I have this big smile on my face. I have some great horses and some great riders. I have some good people, which is what it takes to have success. The race set up perfectly for us." Jockey Sasha Risenhoover added, "It went just the way I thought it would. He did the work and it really worked out well. The hole opened up and he just went. I asked him for his life and he just gave it to me. He did really well."