The major California prep race for the Kentucky Derby is the $750,000 Santa Anita Derby (G1), celebrating its 75th renewal this year, contested at 1 1/8 miles over the Santa Anita main track just 4 weeks before the Run for the Roses. Conditions were excellent at the historic Arcadia oval, with 33,166 fans enjoying sunny skies and temperatures in the mid 80's. A field of nine 3-year-olds went to post on Saturday, with San Felipe Stakes (G2) winner Creative Cause sent off as the 9-10 favorite. In to challenge him included 4-1 second choice I'll Have Another, winner of the Robert B. Lewis Stakes (G2) last out, and 6-1 third choice Liaison off his fourth place finish in the San Felipe. 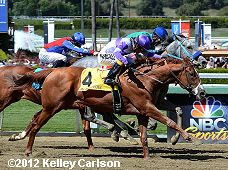 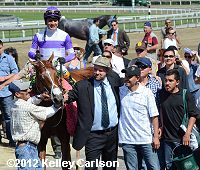 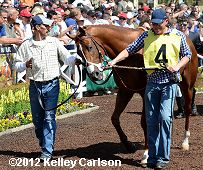 Left: I'll Have Another in the winner's circle. Winning trainer Doug O'Neill said, "It was a great ride by Gutierrez. To me, he's the closest thing to Bejarano we've got. He's such a brilliant rider and he's got real finesse. He's confident but a humble kid. If you can't get Bejarano, why not Gutierrez? I saw Creative Cause come up on the inside and I thought for a split second, running second in the Santa Anita Derby is pretty freaking good. All the wins are big at the time, but right now, this feels as big as it ever gets. I loved the way the race unfolded and how Mario had him positioned going into the first turn. Creative Cause coming up on the inside definitely gave me a scare, but our horse fought on."

Right: I'll Have Another in the walking ring before the race. 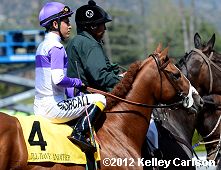 I'll Have Another in the post parade. Jockey Mario Gutierrez, celebrating his first Grade 1 win, said, "This is so unbelievable. He is such a good horse and he gave me a big kick at the end. There wasn't any doubt in my mind that my horse would give me everything in the stretch leading up to the wire."

Trainer Doug O'Neill added, "He's doing so good. Hopefully, he comes out of this good and if he's 100%, it's on to Louisville." 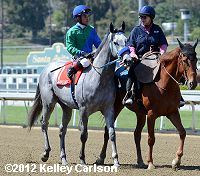 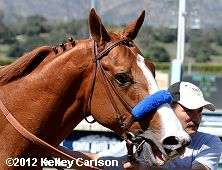 Left: Second place finisher and beaten favorite Creative Cause in the post parade. Trainer Mike Harrington said, "I thought the horse ran a helluva race. I thought Joel (Rosario) rode him perfectly. The other horse beat us today, but will he beat us next time? I don't know. He was more focused (without blinkers). I mean, he never bobbled today. He ran his race. He just got outrun. That happens in this sport. He's not tired. He'll come out of this race. He ran such a huge race last time (San Felipe), he couldn't improve on that race too much. I mean, how far can you go? He ran a zero Thoro-Graph in the last race, so how much further can you go?

Right: Third place finisher Blueskiesnrainbows after the race. Jockey Joe Talamo said, "We had an absolutely perfect trip. We got to the lead and had real easy fractions, nobody pressed us. He ran a really incredible race. Obviously any time we go in a race we want to win but that's by far the best race he's ever run. He really ran a winning race." 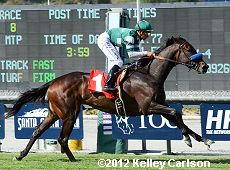 The $150,000 Providencia Stakes (G3) featured three-year-old fillies going 1 1/8 miles on the turf. Lady of Shamrock was sent off as the 9-10 favorite in the field of 5, off her win in the China Doll Stakes last out after finishing third in the Santa Ysabel (G3). In to challenge her included 5-2 second choice Byrama, winner of an allowance, and 3-1 third choice Charm the Maker, off a disappointing 8th in the Las Virgenes (G1).

6-1 Killer Graces, 28-1 longest shot Ms Pianist, and Charm the Maker battled for the lead for the first 3/4 mile through fractions of 24.77, 47.39, and 1:11.50, while Lady of Shamrock was unhurried at the back of the field 8 lengths off the pace. Entering the stretch, Charm the Maker opened a clear lead, getting the mile in 1:35.42. Lady of Shamrock came through on the inside and ran right by the pacesetters to win by 2 3/4 lengths over Byrama in 1:46.80 over the firm course. It was 1/2 a length back to Killer Graces third, while pacesetter Charm the Maker stopped badly in the final 1/16 to finish fourth. 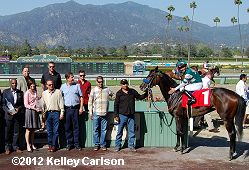 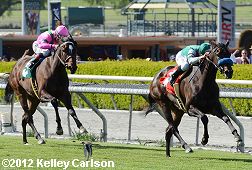 Left: Lady of Shamrock in the winner's circle with the San Gabriel Mountains in the background. Winning trainer John Sadler said, "Very happy. We thought we were running the best horse. She's obviously good on this course. What we'll try to do is have a nice campaign with her this summer and be back in the fall."

Right: A bird flies by during the stretch run. Jockey Mike Smith said, "This filly is really fun to ride because she has quite a turn of foot. She's kind of a tall lanky filly, but she gets over the grass unbelievably." 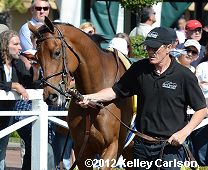 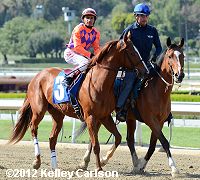 Left: Second place finisher Byrama in the walking ring. Jockey Garrett Gomez said, "I've ridden both (Byrama and Lady of Shamrock), and that filly's probably just a better filly right now. I had a really good trip and had a decent setup in front of me, but she ran a respectable race. Everything worked out well, and we were just second best today." 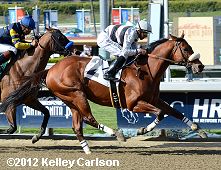 The $150,000 Potrero Grande Stakes (G2) featured a field of six older horses sprinting 6 1/2 furlongs on the main track. Breeders' Cup Sprint (G1) winner Amazombie was sent off as the 6-5 favorite off a third place finish in the San Carlos (G2). In to challenge him included 5-2 second choice Sway Away, second in the San Carlos, and 3-1 third choice Roman Threat, off his debut win.

Jockey Martin Garcia sent Roman Threat to the lead exiting the chute and he set very fast fractions of 22.02 and 43.95 while stalked by Amazombie the whole way. Entering the lane, Roman Threat continued to lead through 3/4 in 1:07.89, but Amazombie outfinished him in the final 1/16 to prevail by 3/4 length in 1:14.16 over the fast track. It was another length back to 9-1 Camp Victory third. 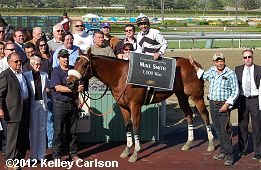 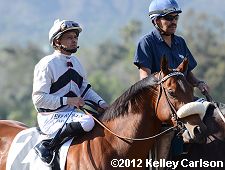 Left: Amazombie in the winner's circle. Jockey Mike Smith, celebrating his 5000th career win, said, "I'm really just beside myself right now. For it to happen on Amazombie is so fitting. Who could have drawn it up any better? I'm just really happy that I finally got to 5,000. Those last two wins were tough. I'm glad that I got it over with. I was a little bit concerned at the 1/4 pole today, but by the time I reached the 1/8 pole I was very comfortable. This horse is a champ."

Right: Amazombie in the post parade. Trainer Bill Spawr said, "Mike only let him run 1/4 mile. Amazombie's stronger this year. He's gained weight, but it was too much for the San Carlos going 7/8 and I think now he's at racing weight, what it should be. But he's stronger, he's got more muscle, better color, and probably weighs 60, 70 pounds more and it's all muscle. Our goal this year is the Breeders' Cup if we're fortunate enough to get there, and this is our first step." 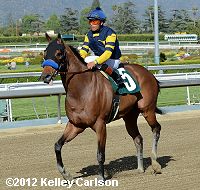 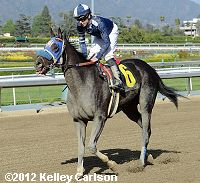 Left: Second place finisher Roman Threat returns after the race. Jockey Martin Garcia said, "It was only his second start. At the 1/2 mile we got pressure. That was the race. I had to take advantage of the race, what's going on the lead. Next time he's going to be a really tough horse."

Right: Third place finisher Camp Victory returns after the race. The 9-1 shot was unhurried under jockey Joe Talamo, then closed late to get third beaten 1 3/4 lengths. The Mike Mitchell trainee improved his record to 7 wins, 3 seconds, and 1 third in 21 starts, earning $355,986 for owners Featherston, Jacobsen, and Miller. 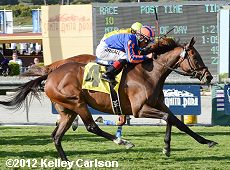 Closing out the stakes action on Santa Anita Derby day was the $75,000 American Beauty Stakes for older fillies and mares going 1 mile on the turf. Belle Royale was sent off as the 6-5 choice in the field of 9 over 4-1 Gem of Soul and 7-1 Sweetly Peppered. 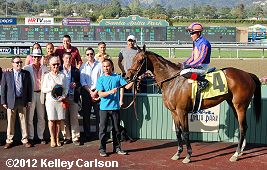 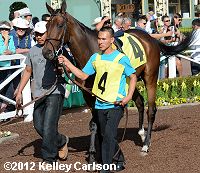 Left: Belle Royale in the winner's circle. Actress Helen Mirren (holding the silver plate at left) made the presentation.

Right: Belle Royale in the walking ring before the race. The Simon Callaghan trainee improved her record to 9 wins, 7 seconds, and 0 thirds in 25 starts, earning $208,231 for owner Michael Tabor.