Fair Grounds Race Course hosted 5 stakes races on Saturday afternoon for Louisiana Derby Preview Day, including one of the major Triple Crown prep races: the $400,000 Risen Star Stakes (G2), the major local prep for the Louisiana Derby and worth 50 points as part of the Kentucky Derby Championship Series. A field of nine 3-year-olds went to post in this 1 1/16 mile main track feature, with Kentucky Jockey Club (G2) runner-up Imperia sent off as the 3-2 favorite. In to challenge him included 7-2 second choice War Story, 5th in the Holy Bull (G2) at Gulfstream, and 4-1 third choice International Star, winner of the Lecomte Stakes (G3).

30-1 St. Joe Bay battled for the lead with 111-1 longest shot Hero of Humor through fractions of 23.29, 47.08, and 1:12.16 over the fast track, while stalked be 6-1 Tiznow R J. Entering the stretch, the pacesetters tired as International Star, 6th early and along the rail, and War Story, 7th early and 4 wide on the turn, came on late to gain the front through 1 mile in 1:37.36. International Star pulled away in the final 1/16 to win by 1 length in 1:43.82. It was another 1 3/4 lengths back to 7-1 Keen Ice third. Kent Desormeaux aboard War Story claimed foul against Miguel Mena aboard International Star for interference on the first turn but the claim was disallowed by the stewards and the result stood. 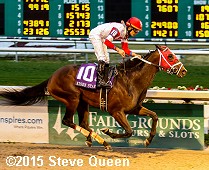 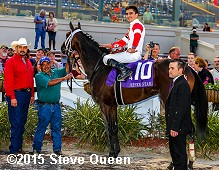 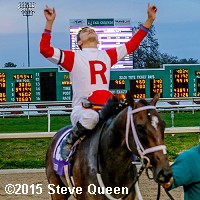 Left: International Star in the winner's circle. Winning trainer Mike Maker said, "He was doing super and he ran as advertised.  I wasn't worried about the post.  Realistically I thought we had an outside trip and we wound up having a trip like in the Lecomte turning for home looked. Not going to change routes for him; he loves it (at Fair Grounds) and there's no reason to change course." He will start next in the Louisiana Derby.

Right: Winning jockey Miguel Mena celebrates aboard International Star. Mena said, "The (far outside) post position worried me.  You never know if you can get to the rail, where he wants to be. I was impressed because I moved at the 5/16 pole to get through and he came through a tight hole and then another one at the 1/4 pole and kept running and drawing away.  I think more distance will be no problem.  He rates well, he loves the rail; it doesn't matter how tight the hole is – he goes for it.  When I put him on the rail, he grabs the bit and when we come up to a tight hole, he just goes for it.  Not many horses do it.  The more you save, the more you're going to get.  He's not much to look at it, but he has a big heart." 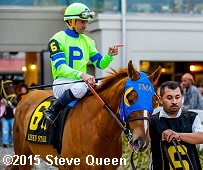 Left: Second place finisher War Story heads out to the track. Trainer Tom Amoss said, "I'm disappointed that we haven't solved his problem leaving the gate.  It's something we'll continue to work on and is the difference between winning and losing a race like this.  When you break like that, it's such a compromising factor; your options become limited.  We lost a lot of ground on the turn and were widest of all.  There are a lot of encouraging things and he had a tougher trip that last time.  He's not a big horse but he shows a lot of grit.  There's more to come from this guy.  His next start has not been decided." 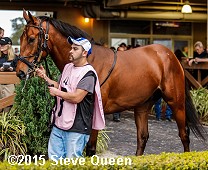 Right: Third place finisher Keen Ice in the paddock. Trainer Tom Amoss said, "I'm disappointed that we haven't solved his problem leaving the gate.  It's something we'll continue to work on and is the difference between winning and losing a race like this.  When you break like that, it's such a compromising factor; your options become limited.  We lost a lot of ground on the turn and were widest of all.  There are a lot of encouraging things and he had a tougher trip that last time." Jockey Kent Desormeaux added, "We had about the same trip as the winner, but he cut the corner and I had to swing five-wide. He didn't break well.  There's nothing more to say." 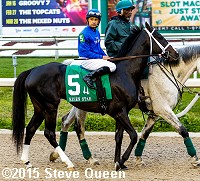 Left: Fifth place finisher and beaten favorite Imperia in the post parade. Jockey Mike Smith said, "We had a great trip, but he just didn't handle the surface. When I had him in hand he was fine, but when I asked him to pick up, he just started swimming."

Right: The horses break from the gate for the Risen Star. Florent Geroux aboard fourth place finisher (breaking from the rail) St. Joe Bay said, "Great trip. I was going nice and easy, but (Hero of Humor) hooked up with me way too early and my horse got a little tired." Trainer Peter Miller added, "We just got hounded the whole way with a fast pace and the he still ran well.  We'll look at all our options but will certainly consider coming back for the Louisiana Derby."


The distaff counterpart to the Risen Star is the $175,000 Rachel Alexandra Stakes (G3) for 3-year-old fillies also going 1 1/16 miles on the main track, worth 50 points as part of the Kentucky Oaks Championship Series. Silverbulletday Stakes winner I'm a Chatterbox was sent off as the 3-1 favorite in the field of 10. In to challenge her included 4-1 Angela Renee, third in the Demoiselle (G2), and 9-2 West Coast Belle, fourth in the Silverbulletday. 72-1 White Clover and 77-1 longest shot Pleasant Tales dueled for the lead through fractions of 23.19, and 46.98 while stalked by 5-1 Lovely Maria. On the far turn, Lovely Maria gained the lead through 3/4 in 1:12.05, but I'm a Chatterbox, last early, circled the field to get to the front through 1 mile in 1:37.32. Kept to task by jockey Florent Geroux she drew off tyo win by 2 1/2 lengths over Lovely Maria in 1:44.10. It was just a neck back to late-running 9-1 Forever Unbridled third. 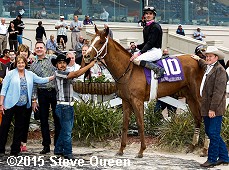 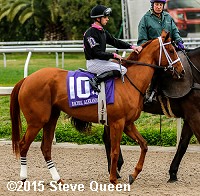 Left: I'm a Chatterbox in the winner's circle. Winning trainer Larry Jones said, "She overcame the outside post and it will kill you here.  She sat well, but she had done that in her first race, so we weren't too concerned about that.  The horse on the inside was setting a good pace, so we knew there was a legitimate pace to close into for her.  She is awfully game.  She has a world of talent."

Right: I'm a Chatterbox in the post parade. Winning jockey Florent Geroux said, "She just relaxed on her own.  Coming from the 10-hole, we had to either go, sit very close or take back.  When everyone went, I decided to take her back and she was relaxing very nicely.  I kept an eye on (Angela Renee) and made (Rafael Bejarano) stay with horses a little longer and made him wait a little bit.  My filly was very nice.  Even if he would have come with me head-to-head from the 1/2 mile pole to the finish line, my filly was the best today." 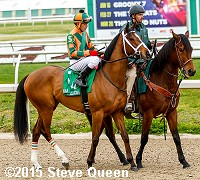 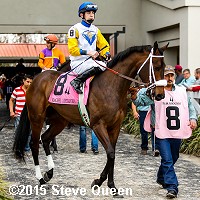 Right: Second place finisher Lovely Maria in the post parade. Jockey Kerwin Clark said, "My filly ran her heart out. Both fillies were training well coming into this and someone had to win it. Too bad it was Florent, but it's a team effort for Larry and these fillies."

Left: Third place finisher Forever Unbridled heads out to the track before the race. Jockey Brian Hernandez Jr. said, "We had a great trip.  She broke well and our filly was athletic enough to overcome anything in the first turn.  She got herself in a good spot.  She ran hard. It was a really good horse race coming down the lane.  She was between two horses and gutted it out.  Hopefully we can turn the tables in the (Fair Grounds) Oaks." 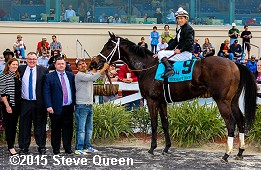 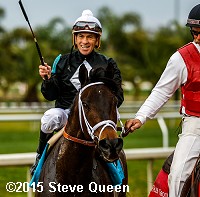 Left: Street Babe in the winner's circle. Winning trainer Mike Dilger said, "After his last race we said we would try and go somewhere to try to run him a mile and a sixteenth and figured that the configuration here would suit him better.  The longer stretch helped.  He is a late starter but we still don't know how good he is.  We might come back here for the New Orleans Handicap or go to the Charles Town Classic next."

Right: Jockey Kerwin Clark celebrates aboard Street Babe. Clark added, "You're going to see a lot of this horse – he was just playing around. When the horse came up on the outside, I thought we were beat, but he cut away. When he got to the front, he was playing around again or he would have won easily." 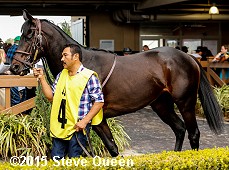 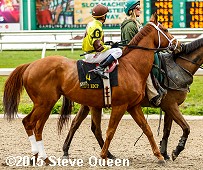 Left: Second place finisher Mystery Train in the paddock before the race. Jockey Francisco Torres said, "He tugged, but that's his style. He actually settled a little bit for me and went on in the stretch."

Right: Third place finisher and beaten favorite Red Rifle in the post parade. Jockey Rafael Bejarano said, "I expected to be closer in the race, but he number 7 cut me off and I didn't have anywhere to go and my horse doesn't like too much dirt in the face.  I had to wait until the stretch and he was only one paced.  He might prefer 1 1/8 or 1 1/4." 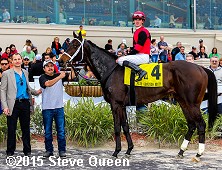 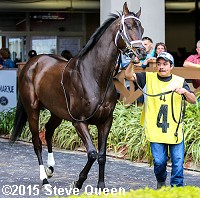 Left: Chocolate Ride in the winner's circle. Jockey Florent Geroux said, "My horse broke sharp and I just let him do his thing.  No one wanted to go with him, so I took advantage.  I was able to slow him down and when I asked him down the lane he really took off.  My horse ran great."

Right: Chocolate Ride in the paddock before the race. Ricky Giannini, assistant to trainer Brad Cox added, "The race just happened to set up like it did last time and I believe he might have finished faster than he did last time.  Just goes to show us that he's improving significantly right now.  Obviously the Muniz will be the target now being the same distance and track and he has two wins here now." 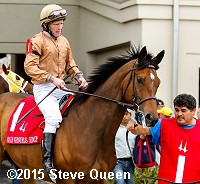 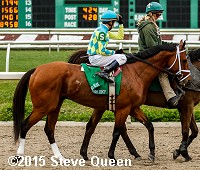 Left: Second place finisher Glenard heads out to the track before the race. Jockey James Graham said, "It was his first time off the boat. He gave me a big run turning for home and then sort of leveled off in the final 1/16. He should be better next time and may want to go 1 1/2."

Right: Third place finisher Pyrite Mountain in the post parade. Jockey Rafael Bejarano said, "I just let me horse fall into the race.  I didn't want to rush him.  He ran well and my trip was okay." 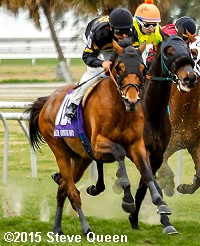