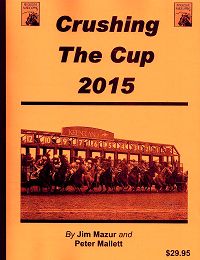 This year, Jim Mazur and Peter Mallett's legendary Crushing The Cup celebrates its 23rd year in print. In this, the flagship product of Progressive Handicapping Inc., the dynamic duo compiles all sorts of statistics from past Breeders' Cups in order to come up with a winning profile for the World Championship races, which will be celebrating their 31st renewal on October 31 and November 1. No stone is left unturned as they examine track biases of the host track, prep races and running styles used by past winners, number of days since last start, and much more. The book is a real eye-opener for a casual bettor/fan since it gives such a participant so many different angles to work with to find that elusive "crush" on the big day, but would definitely be useful to horseplayers at all levels of betting.

Unlike some handicapping publications on the market, Mazur and Mallett don't simply brag about their successes and not admit their failures. More importantly, Mazur and Mallett take very different approaches to handicapping, but share a common objective of "crushing" a few races rather than grinding out a profit on winning low payoffs on more races, and still frequently come up with the same picks. Mallett is the "left-brained" handicapper from Canada's west coast, relying on observations and hunches, while Mazur is the "pragmatic" Warren Buffett-style numbers guy out of Florida. The first chapter is a detailed narrative of last year's Championship day, listing what their selections had been and how they came up with them, what bets were placed, and how much money was won or lost. For example, Turf winner Magician and Dirt Mile winner Goldencents were dismissed as mere "pretenders" (but were used as B or C Team horses in multirace bets). These men must be applauded for this full disclosure, which lends much more credibility to their publication than a series of red-boarded winning bets. No handicapping or betting strategy is perfect and the "Crushers" are honest and brave enough to not claim that theirs is, although in 2013 they did have one of the most profitable Cups in recent memory.

The host track used to change annually, presenting problems when trying to come up with a winning bet, but this being the last of three consecutive years at Santa Anita (all of which on the current dirt surface) we have very recent information to work with. An entire chapter discusses what the facility looks like and the track's biases at each of the Cup race distances, data useful not only to those betting on the Cup races themselves, but also to players wanting to increase their Santa Anita play. The editors disregard the 2008 and 2009 main track races for certain statistics due to the fact they were run on a synthetic surface, however Mallett warns that the dirt is never the same two years in a row, and even found in 2013 that the track had been tweaked numerous times over the week, changing the bias almost daily.

Each of the 13 World Championship races (down from 14 after the cancellation of the Marathon) is featured in its own chapter, beginning with a chart listing past winners (Santa Anita only for the original 7 races), the winning trainer and jockey, the running style used, age, post position, win and exacta payoffs, and winning Beyer. You can already see some trends unfolding, and in the pages that follow, those trends and others are examined in great detail. Some races feature more winning favorites, some favor a specific runstyle (wire, stalk, or rally), and some see most of its winners coming from a certain prep race. Each chapter concludes with the Daily Racing Form past performances of the last few winners, again giving the reader a chance to look for trends that may reappear this year. Also included (on Page 29) is a URL and password to access the book's appendix in PDF format, which includes additional data left off the print edition for space considerations.

To accompany Crushing the Cup, Progressive Handicapping releases The Crushing Zone one week before Championship day. This newsletter-sized publication of about 30 pages length sorts the pre-entrants for each race into the three categories of Contenders, Gray Zone, and Pretenders. You purchase a password from Progressive Handicapping which allows you to download the Zone, which is updated daily through Saturday morning based on any changes such as post positions, late scratches, good or bad morning workouts, and weather. Mallett will be at Santa Anita starting Monday to report on the morning workouts and track maintenance "tricks" for the benefit of the Crushing Zone, while Mazur camps out at Mohegan Sun Racebook for Progressive Handicapping's Breeders' Cup Bash.

Crushing The Cup 2015 is an excellent publication for anybody wanting to bet the tough Breeders' Cup races on October 31 and November 1, or for newer horseplayers wanting to learn more about the use of angles and biases when selecting their horses, on Cup day and otherwise. Mazur and Mallett have done their homework through 23 years of experience, and the fruit of their labor is yours for just $29.95. From their Breeders' Cup experience they have expanded their operations and also publish similar statistical analyses for the Triple Crown and for major circuits in North America.

Crushing The Cup 2015 has a cover price of $29.95 and is available from Progressive Handicapping Inc. and Daily Racing Form. There are package deals available which include combinations of some or all of their Breeders' Cup products.