On Sunday afternoon, a field of 13 Canadian-foaled 3-year-olds raced 1 1/4 miles over the Tapeta surface at Woodbine in the 158th running of the $1 million Queen's Plate Stakes, the oldest continuously-run stakes race in North America and the first leg of the Canadian Triple Crown. Intermittent showers passed through the area during the afternoon but conditions were mostly sunny with temperatures in the low 80's accompanied by wind gusts near 30 MPH.

As expected, Holy Helena was sent off as the 2-1 favorite, making her 4th lifetime start atfer finishing second in her debut at Aqueduct, breaking her maiden at Belmont Park, and then shipping to Woodbine to win the Woodbine Oaks. In to challenge her included 5-1 second choice Aurora Way, a debut winner at Woodbine last out, and 13-2 third choice Channel Maker, second in his last 2 starts, an allowance at Keeneland and the Marine Stakes (G3) at Woodbine. 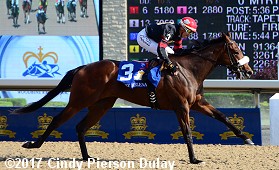 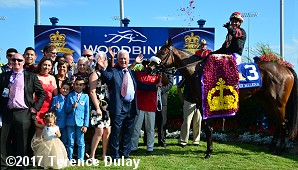 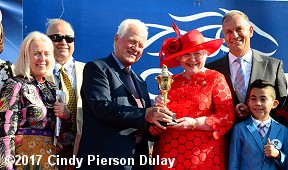 Left: Holy Helena in the winner's circle with owner Frank Stronach holding her.

Right: The Honourable Elizabeth Dowdeswell, Lieutenant Governor of Ontario presents the Queen's Plate trophy to winning owner-breeder Frank Stronach. Stronach, celebrating his 4th Queen's Plate, said, "I think she is a very good horse. I put a lot of effort in, a lot of time in and naturally I can put all the money in and do everything great, but you still need some luck." 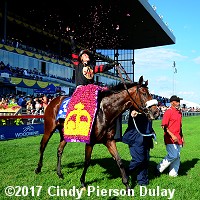 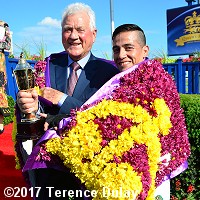 Left: Holy Helena parades for the fans after the race while winning jockey Luis Contreras tosses flowers. Contreras said, "I got a dream trip, really. She broke really good. She gave me a lot of time to see the horses outside of me, what they are going to do, what they are trying to do. She was so nice and relaxed behind those horses and I had a lot of horse at the 3/8 (pole), so I took a look back to see where everybody was and I didn't see anybody coming. I waited for the 1/4 pole to run. When I put her outside and asked her to go, she just continued. I had plenty of horse left at the end, she's something special." 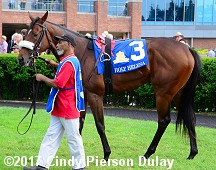 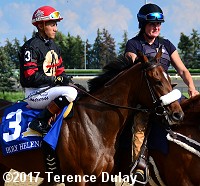 Left: Holy Helena in the paddock before the race. Stronach added, "(Winning the Queen's Plate) doesn't get boring. That's great, especially if you have a filly that wins the Plate. I don't think (she will attempt the Triple Crown by going to the Prince of Wales in 3 weeks). Normally I don't like to run fillies or any horse that quick after a big race, so she gets a little break now. You don't want to go that often to the well. We might consider the Alabama. I think many times Canadian-bred horses have done well in the States."

Right: Holy Helena in the post parade. Mike Doyle, racing manager for Stronach Stables said, "She arrived in fantastic shape and maintained it the whole way through. She's exceptionally laid back. I think she could be very good. What she did out there today, with so much ease was incredible. Jimmy (Jerkens, trainer) and I, and the whole team here, we're in touch every day. What she did there today, with so much ease, was incredible," said Doyle. "She ran faster than the Dominion Day yesterday won by a good horse who has been around for a little while (Melmich). I'd say she could be very special." 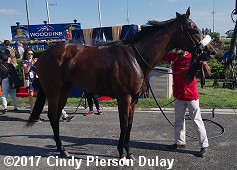 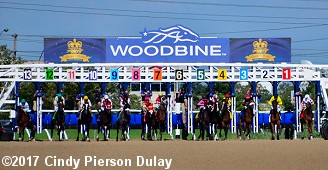 Left: Holy Helena gets hosed off after the race. Contreras added, "I kind of had the same feeling I had with Inglorious because I think we did pretty much exactly the same thing. (In the Oaks), I was asking a little bit the whole trip to keep her in good position. Today, she was relaxed and waiting for me to make my move."

Right: The horses break from the gate for the 158th Queen's Plate. 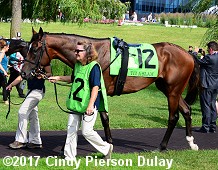 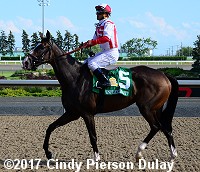 Left: Second place finisher Tiz a Slam in the paddock before the race. Jockey Eurico Da Silva said, "I could not be more happy. She was running very game and my horse was kicking pretty good, but at that point it was very difficult to win the race. It was a good, quality race, a very competitive race and I finished second. I passed a lot of horses but I didn't pass (Holy Helena)."

Right: Third place finisher Inflexibility returns after the race. Jockey Javier Castellano said, "It was good. I wish there was a little more pace in the race to set it up. She fought past the horses despite the slow pace and she still finished really strong." 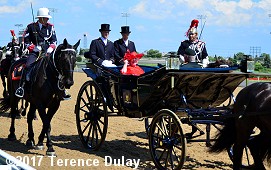 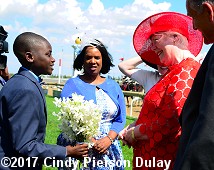 Right: After exiting the landau, she was first welcomed to Woodbine by president and CEO James Lawson then presented flowers by Damilola while Trust 15 Founder/Executive Director Marcia Brown looks on. Lawson then escorted Her Honour across the turf course and up the steps to the Royal Box on the second floor clubhouse.