The $1 million Preakness Stakes (G1) is the second jewel in the Triple Crown. A field of 10 three-year-olds contested the 146th renewal of this 1 3/16 mile classic around two turns at historic Pimlico Race Course in Baltimore, with a COVID limited attendance of just 10,000 paying spectators on hand. Conditions were excellent with sunny skies and temperatures in the high 70's, main track fast and turf course firm.

As expected Santa Anita Derby (G1) runner-up and Kentucky Derby (G1) winner Medina Spirit was sent off as the lukewarm 5-2 favorite. In to challenge him included 3-1 second choice Midnight Bourbon, 6th in the Derby after finishing second in the Louisiana Derby (G2), and 7-2 third choice Concert Tour, 3rd in the Arkansas Derby (G1) after winning the Rebel (G2).

Jockey John Velazquez sent Medina Spirit to the lead first time and he set fractions of 23.77, 46.93, and 1:10.97 while pressed by Midnight Bourbon and stalked by 25-1 France Go de Ina and 17-2 Crowded Trade. Turning for home Medina Spirit tired allowing Midnight Bourbon to inherit the lead through 1 mile in 1:34.78. 12-1 Rombauer, 6th early under Flavien Prat, came out 4 wide into the lane and rallied by inside the 1/8 pole to win going away by 3 1/2 lengths in 1:53.62. It was another 2 lengths back to favorite Medina Spirit third. 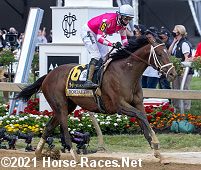 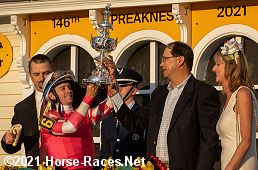 Left: Rombauer in the winner's circle. Winning trainer Mike McCarthy said, "I'm so proud of this horse, everybody involved. It means a lot to be here and participate on a day like this. I'm happy for [owners John and Diane Fradkin]. It just goes to show you that small players in the game can be successful, as well. Hats off to everybody. I wish my family could be here. Fantastic."

Right: Celebrating with the trophy. Winning jockey Flavien Prat said, "It does feel different. Oh, what a feeling. I'm so thankful to [trainer] Michael [McCarthy] and all his team. I want to thank the groom and the pony girl, because he was quite on his toes before the race and I thought they did a great job." 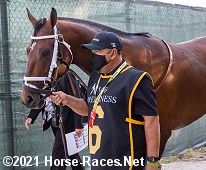 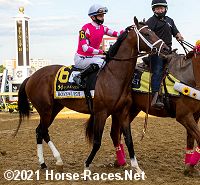 Left: Rombauer walks over before the race. McCarthy added, "That's been him all along. I reached over my shoulder and said to somebody, 'You know what? He's a little bit closer today but it looks like he's traveling well. At the three-and-a-half furlong pole I saw some horses around him moving and not really going anywhere. Coming to the quarter pole, I started to get a little excited. The two horses in front of him were traveling well. At the eighth pole, I've said it before, it was like an out-of-body experience." 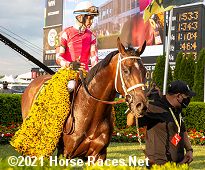 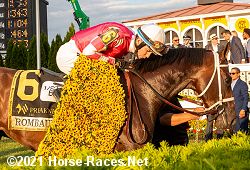 Left: Rombauer with his flowers. Prat added, "To be honest, when I left France it was to do better than what I was doing in France. I didn't know the magnitude of these races. I knew a lot about the Breeders' Cup but the Triple Crown I didn't know much about it. I realize how important it is. There's so much history behind these races. To win one is amazing. To win the Preakness, it's even better."

Right: Rombauer gets a kiss from jockey Flavien Prat after giving him his first actual win in a Triple Crown race. His other was when he got moved up from second on Country House after Maximum Security was disqualified in the 2019 Kentucky Derby. 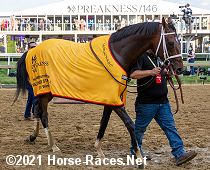 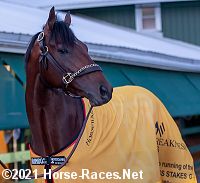 Left: Rombauer heads back to the barn. Winning co-owner Diane Fradkin said, "Well, it's really been exciting. When we went out to visit him in Kentucky of his yearling year, he just had a special look, look of eagles about him. He was attentive. He was showing off in the paddock. He just had that look. And I remember thinking that day, wow, this horse is something special. And here we are. It just kind of all worked out. But knowing that I think makes it even more special."

Right: Rombauer poses nexts to the stakes barn after finishing in the test barn. Co-owner John Fradkin said, "It's very meaningful. It's pretty special. It's a pedigree update that'll be there for a long time for a lot of broodmares. Yeah, we're very proud. I think we'll have to see how he's doing after this race (whether to run in the Belmont). That was the intent. I mean, all along I actually thought that was our best chance of a race to win, was actually the Belmont, because I think he's going to like the distance. But now that we've won this one, it kind of takes the pressure off to do that, and that race is only three weeks out, and the spacing isn't superb to go into a mile-and-a-half race with just three weeks of rest." 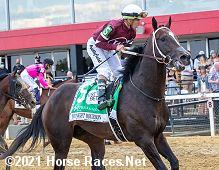 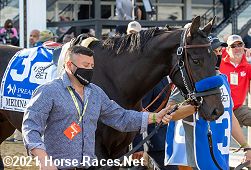 Left: Second place finisher Midnight Bourbon returns after the race. Trainer Steve Asmussen said, "You want to win them all and stuff. And with their [Winchell Thoroughbreds' program], we'll get here. But I thought he ran extremely well. He showed up and he ran his race. Congratulations to the winner. But he took it to Medina Spirit. I think he showed some true ability, and he's a very good horse that's getting better."

Right: Third place finisher and beaten favorite Medina Spirit walks over to the infield saddling areas. Jockey John Velazquez said, "I knew he was going to be pressed today and I was hoping he wasn't going to overdo it but he did. By the quarter pole, the other horse put his head in front but he kept fighting. He didn't stop he just got beat. He kept running he still finished third. Most horses at the quarter-pole like when they get passed they just give up and he kept running. You gotta give it to him." 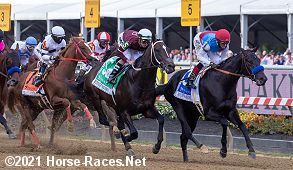 First time by with Medina Spirit and Midnight Bourbon out front. Jimmy Barnes, assistant to Medina Spirit's trainer Bob Baffert said, "It looked like Johnny got him into the spot where he wanted to be. That horse was right on him the whole way and never really gave him a break. It's tough going back in two weeks off of that race. A little disappointed, but we go on from here." Midnight Bourbon's trainer Steve Asmussen said, "Irad (Ortiz Jr.) gave him a dream trip. When he went under the wire the first time, I was thinking, 'Man, I wish the Derby would have looked like that.' But he ran hard; he really did."