The 134,487 in attendance at Pimlico for the Preakness Stakes (G1) were treated to a marathon 14-race card with the first race off at 10:30am. Conditions were less than ideal, after over 7 inches of rain over the last week soaked the main track to sloppy at the start of the card and the turf course to soft, with temperatures in the mid 60's under dark overcast skies. Unfortunately this led to the stewards moving all but one turf race, the Gallorette (G3), onto the main track. 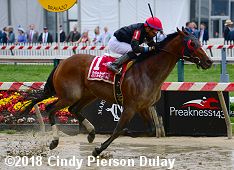 Jockey Edgar Prado sent Unbridled Juan to the lead through fractions of 24.63, 48.65, and 1:12.20 while pressed by Just Howard and stalked by Fire Away. Unbridled Juan continued to lead through 1 mile in 1:37.36 but jockey Manuel Franco sent Fire Away through on the rail to win by 3/4 length in 1:43.92. It was 1/2 a length back to Just Howard third.
Full results chart from DRF 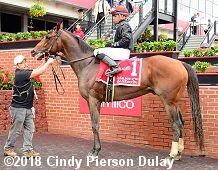 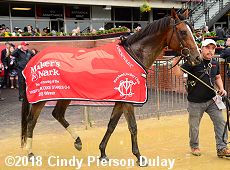 Left: Fire Away in the winner's circle. Robbie Medina, assistant to trainer Shug McGaughey said, "The horse is doing unbelievably good. We wanted to run on the grass, but he has Danzig on one side and Fappiano on the other, and the track is really tight. Shug and I talked this morning and I said, you know, he'll probably like that track. In the morning, when the track is sealed, he likes it. And, you know, he's a different horse now that he's six. He's a lot stronger. So, we took a shot and it worked out."

Right: Fire Away heads back to the barn. Winning jockey Manuel Franco said, "I just trusted my horse and he responded. This horse, when you start asking him, he gives it to you. I just tried to keep busy on him and it worked out well." 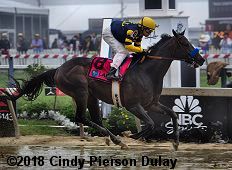 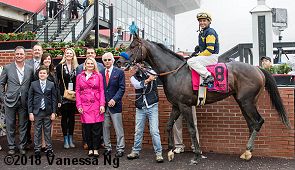 Ax Man in the winner's circle. Winning jockey Mike Smith said, "Oh man, he just skipped over it. End of story. He broke sharp and skipped over it, no problem. He's exciting." Trainer Bob Baffert added, "I was worried about him because he was a little anxious. With him, there's a lot of raw talent." Immediately after this race, Baffert and Smith go on to win the Preakness with Justify. 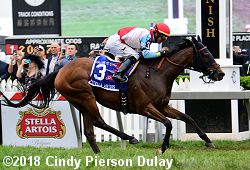 A field of 6 older fillies and mares contested the $150,000 Gallorette (G3) over 1 1/16 miles on the very soft turf. Suwanee River (G3) winner Elysea's World was the 6-5 favorite over 8-5 Ultra Brat, 10th in the Jenny Wiley (G1), and 7-2 Blessed Silence, 3rd in an allowance last out. Jockey Florent Geroux sent 13-2 Stallion Heiress to a clear lead through easy fractions of 25.12 and 51.56 while pressed by 18-1 Brooks House and stalked by Ultra Brat. On the far turn Ultra Brat moved up to gain the lead through 3/4 in 1:18.60. Entering the stretch, Ultra Brat left the field in her wake, drawing off under Jose Ortiz to a 10 1/4 length win over late-running Blessed Silence in 1:53.72. It was 3/4 length back to Brooks House third, and 3/4 more to favorite Elysea's World fourth.
Full results chart from DRF 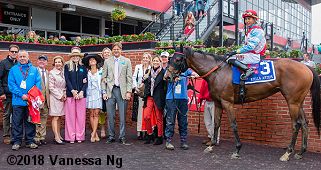 Ultra Brat in the winner's circle. Winning trainer Graham Motion said, "It kind of worked out in my favor today. I was worried about running (on the turf). It's so tiring. I can't exactly imagine the difference to running on this kind of turf and running on firm turf. None of us really knew how she would handle it, but obviously she handled it well. Jose did a great job. I have so much confidence in him." Jocke Jose Ortiz added, "She relaxed well, and that was the most important thing. Because she can be a little high strung, like in the post parade. From the 3/8 pole I tested her to see if she was going to go. I knew nobody would gain a lot of ground, so I wanted to make the first move." 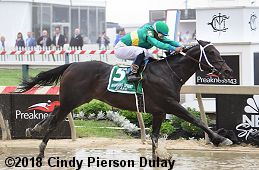 The $150,000 Maryland Sprint Stakes (G3) featured a field of 9 older horses sprinting 6 furlongs on the main track. Last year's Bay Shore (G3) winner Long Haul Bay was sent off as the 8-5 favorite over 3-1 Switzerland, winner of 2 straight allowances, and 9-2 Lewisfield, winner of the Not For Love Stakes. 13-2 Red Dragon Tattoo was quickest away through an opening quarter of 22.94 before Switzerland took over on the far turn through a half in 45.69. Turning for home, Switzerland opened up a 2 length lead through 5f in 57.38. Kept to task by Santana, Switzerland drew off to win by 3 1/2 lengths over Long Haul Bay in 1:09.43. It was another 2 1/2 lengths back to Lewisfield third.
Full results chart from DRF 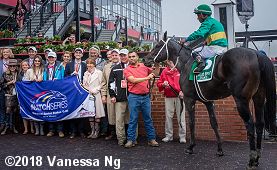 Switzerland in the winner's circle. Winning trainer Steve Asmussen said, "The progression through his conditions and then the timing from the last day at Oaklawn to today was just ideal. He'd moved to Churchill with the barn and was training well. We were excited about this opportunity. I think with a win in a race like this, we will regroup and see what's out there for older sprint horses and take a big swing." Jockey Ricardo Santana Jr. added, "Steve told me the first time that he believed in the horse, and when he says that I always believe what he says. He's an amazing trainer." 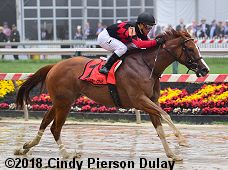 A field of 9 older fillies and mares sprinted 5 furlongs (originally carded on turf) in the $100,000 The Very One Stakes. 31-1 Victorias Fire set the pace of 21.74 and 44.52 while stalked by even-money favorite Girls Know Best and 4-1 Smiling Causeway. Entering the stretch jockey Javier Castellano sent Girls Know Best to lead and was all out to hold off late-running 6-1 Pretty Perfection in 57.00. It was another 1 3/4 lengths back to 16-1 Anna's Bandit third.
Full results chart from DRF 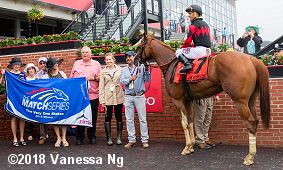 Girls Know Best in the winner's circle. Winning trainer Eddie Kenneally said, "She's matured and grew-up and I think she's just sort of got lucky, really. Javier knows her and he's won a stakes on her at Gulfstream this year. I think he rides her with some confidence and we figured that is the only way to ride her. She's naturally quick, so there isn't a whole lot of instructions, really." Jockey Javier Castellano added, "I like her because she doesn't have to be in the lead. She just sat right off her and relaxed. If she wants to go to the lead she can, but today they were going fast and my goal was to save something for the end and that's what happened." 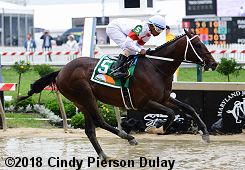 The $200,000 Chick Lang Stakes featured a field of 9 three-year-olds sprinting 6 furlongs on the main track. Jockey Ricardo Santana Jr. sent 2-5 favorite Mitole to the lead through fractions of 21.67 and 45.93 while pressed by 6-1 Curly's Rocket and stalked by 34-1 Old Time Revival. Turning for home Old Time Revival and Curly's Rocket both tired allowing Mitole to open up a 4 length lead through 5f in 57.63. Kept to task by Santana, Mitole cruised to a 6 1/4 length win over late-running 9-1 Still Having Fun in 1:09.29. It was another 2 1/4 lengths back to 27-1 Clouded Judgement third.
Full results chart from DRF 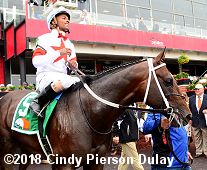 Mitole in the winner's circle. Winning trainer Steve Asmussen said, "He's a special horse, he really is. His confidence level has gotten better, just the way he comes into a race, and acts during it, has been spectacular the past two or three races. He was solid and nice and ran some good races, but he was a horse that carried quite a bit of weight and ran solid, and got better." 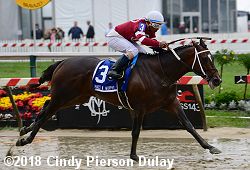 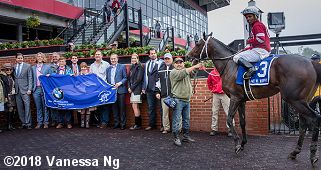 Tap Daddy in the winner's circle. Winning trainer Steve Asmussen said, "He's just a very nice horse. He's a very versatile horse. Everyone says speed is good in the mud if you handle it. He did, and when he went to the wire he was taking to it very much." Jockey Ricardo Santana Jr. added, "We had a lot of confidence in the horse. I knew he was going to run well. My plan was to put him on the lead, let him keep going, and that's what he did."