The record 121,309 fans in attendance at Pimlico for the Preakness Stakes (G1) were treated to a marathon 13-race card with the first race off at 10:45am. Mostly sunny skies were the order of the day with temperatures in the lower 80's making for ideal racing conditions over the fast track and firm turf in Baltimore. 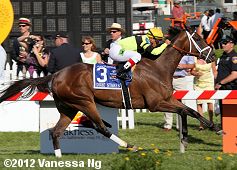 A field of 11 older horses went 1 1/8 miles on the turf in the $300,000 Dixie Stakes (G2). Hudson Steele was sent off as the lukewarm 3-1 favorite off his win in the Henry Clark Stakes. In to challenge him included 7-2 Casino Host, winner of the Mervin Muniz Handicap (G2) at Fair Grounds, and 9-2 Air Support, fifth in an allowance at Keeneland last out. 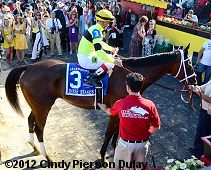 Hudson Steele in the winner's circle. His trainer Todd Pletcher said, "When he won over here the other day we were thinking is three weeks going to be enough time?" Pletcher said. "The horse took that race so well, he bounced out of it so well and trained so sharply it turned out to be an easy decision to run back in three weeks. He's done very little wrong his whole life. Nice horse." Jockey Javier Castellano added, "I just waited, didn't want to move; when Mario's horse blew the turn I was able to split horses, and when he split he took off amazingly. Nobody could beat that horse today." 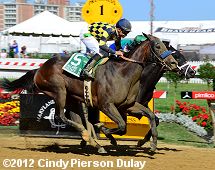 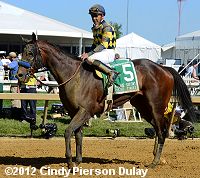 Awesomemundo heads to the winner's circle. Her trainer Bob Baffert said, "There was a lot more pressure on Mike with this filly because she's (owned by Baffert's wife). She wasn't in the picture and Jill said to me, "why is she way back there?' I said, 'that's the way she runs.' I told Mike, 'she runs like Zenyatta a little bit, but don't count on her to make up that much ground.'". Jockey Mike Smith added, "(Awesomeundo and Love and Pride) came together a little bit because she was gawking around at the crowd, but it wasn't anything. We had a little trouble leaving, but she proved she's very talented. She has a beautiful long kick." 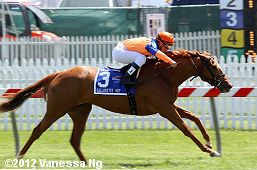 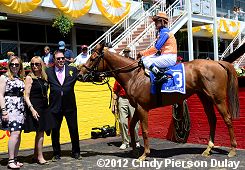 Zagora in the winner's circle. Her trainer Chad Brown said, "Once she gets settled and gathers herself together, she really has a strong kick. Javier's a top rider and when he's on my horses, I'm a lot less nervous. Nine times out of 10 he finds a way. She didn't break that well, but I thought Javier did a great job to stay on the inside. He knew he was on the best horse." Jockey Javier Castellano added, "It worked out really good today. It was a great performance. The pace was pretty fast today. She didn't break that good. I was a little concerned about that, but the bottom line is that it worked out great. They spread out and I saved all the ground, and she finished great." 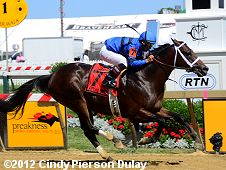 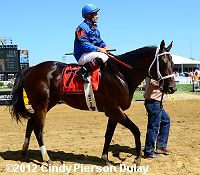 Hamazing Destiny heads to the winner's circle. His trainer D. Wayne Lukas said, "He was the favorite and he ran like it. I thought Corey did a nice job. I was a bit worried when they threw up that 23. I thought, 'Well, they're not going very fast, and we're still in it. The horse liked the track. It's a good way to start the day." Jockey Corey Nakatani added, "The trip was great. He broke alertly and they weren't going as fast as they were at Churchill last time. So it helped to get in a real stalking position. (Lukas) wanted me to be just off them like we were. It enabled him to run his best race. He ran a tremendous race." 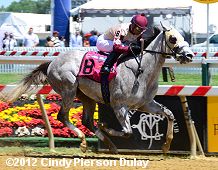 The $100,000 Chick Lang Stakes featured a field of 7 three-year-olds sprinting 6 furlongs on the main track. 11-10 favorite Innocent Man was quickest away and set fractions of 23.24 and 46.27, but in the stretch, 7-2 third choice Il Villano easily ran by him to win going away by 4 3/4 lengths over late-running 3-1 second choice Laurie's Rocket in 1:10.40. It was a head back to Innocent Man third.
Full results chart from DRF 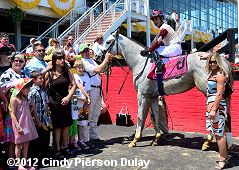 Il Villano in the winner's circle. His trainer Susan Crowell said, "I saw that they were going pretty fast and he sat exactly where I wanted him to. He made his one run on the turn for home, and we were very impressed the way he ran today. I was worried coming in, because he had his little vacation, but he had a couple of good works. We were hopeful. We'll keep him short and probably head for the Jersey Shore at Monmouth Park." Jockey Jose Flores added, "I had to go early. (Innocent Man) was going, so I knew I had to go to have a good shot. My horse is very quick. He keeps getting better and better." 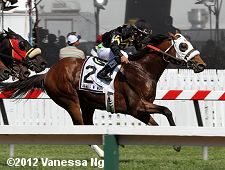 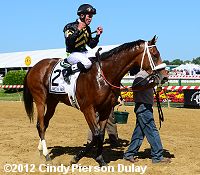 Skyring heads to the winner's circle. His trainer D. Wayne Lukas said, "He's by English Channel, maybe we should try the grass. It really worked out well. I knew at the top of the stretch when they swarmed him, I said to myself, 'He isn't done yet.' This horse really tries. Turf horses usually have a lot of trouble going wire to wire. It's usually a closer, somebody on the outside blowing by them. You're not always happy to see your horse cruising on the lead, no matter how easy it is." Jockey Joel Rosario added, "It was a perfect racing for me and my horse. He went to the lead and started playing around, but I could tell he was trying hard at the end. The boss told me, he tries hard and never gives up. He was certainly right." 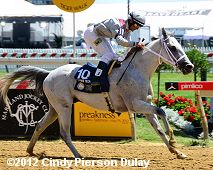 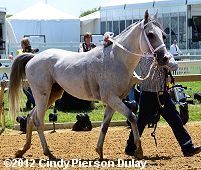 TM Fred Texas in the winner's circle. His trainer Ronald Martino said, "He's always been a handful in the paddock, and that is why we didn't put the rider up until he came out on the track. I preferred to be on the outside. That way he could stay out of trouble. I'm telling you this is an iron horse. He always shows up. I'm not sure where he'll run next." Jockey Abel Castellano Jr. added, "I was about 10-wide in the first turn and I was a little worried about that. I was able to drop him over and gradually saved some ground in the second turn. When I really asked him to run, he responded pretty well."