It was a pretty slow morning today at the stakes barn since several of the Preakness contenders haven't arrived yet. Still there were a few horses from the Preakness, Pimlico Special, and Black-Eyed Susan out and about for the throng of media in attendance. 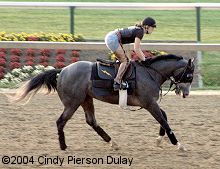 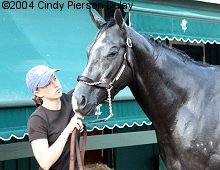 Imperialism was out for a jog with trainer Kristin Mulhall up. Afterwards she also held him for his bath. Owner Steve Taub said, "He actually likes traveling. It's amazing. He's the most composed horse I've ever been around. Nothing bothers him. When a horse comes off the van after six hours or seven hours of traveling, you can usually really tell it, especially in this heat. But he didn't a have drop on him. He was doing so well after the (Kentucky Derby) that we had to consider running him here, and he kept doing better and better. He really only got to run the last quarter of a mile, so it hardly took anything out of him." 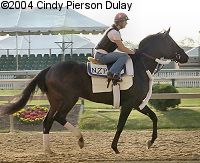 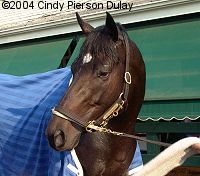 The Cliff's Edge walked the shedrow before going out for a gallop then a bath. Supposedly he has been bothered by sore feet and will be treated for this today by a veterinarian Dr. Dan Dreyfus and a blacksmith. Trainer Nick Zito said "Something's jamming him. He's stiff all over. It took him a long time to warm up today in the barn. He's got pulsation in the foot. We've been going along good until this morning. On the track he was fine, but after we gave him a bath, he was [walking] a little funny. I've got to hope that we get a few good days. We'll see how he trains tomorrow and go from there." 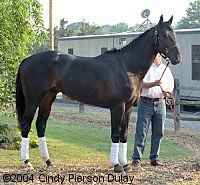 Santa Anita Handicap winner Southern Image was out for a walk this morning. He will be in the Pimlico Special on Friday. 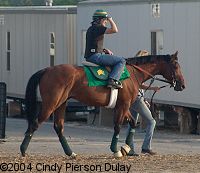 Midway Road was out for a gallop today as well. He was second to Funny Cide in the Preakness last year and will be in the Pimlico Special on Friday, coming off an 11 1/4-length victory in the Ben Ali Handicap (G3) at Keeneland. 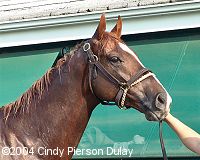 Nick Zito trained Royal Assault who was 5th in the Wood after stumbling at the start. He is not entered in the Preakness but is likely for the Sir Barton Stakes on the Preakness undercard. 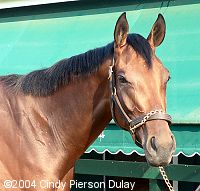 Black-Eyed Susan entrant Song Track was out for a bath this morning. Trainer Neil Howard said, "She's got a lot of quality. We thought this race at Pimlico, coming on the heels of the Oaks, gives you a chance to step up while ducking your Ashados, your Madcap Escapades, your Victory U. S. A.'s." She won her last start, an allowance race at Keeneland, by 7 1/2 lengths.