A record crowd of 112,668 was witness to history at Pimlico Race Course this afternoon as Someday Farm's Smarty Jones moved one step closer to becoming the 12th Triple Crown winner with an impressive victory in the 129th running of the $1,000,000 Preakness Stakes (G1).

The race started much like the Kentucky Derby, with jockey Mike Smith gunning 5-1 second choice Lion Heart right to the front, with 3-5 favorite Smarty Jones stalking him a length back through an initial quarter in 23.65 and a half in 47.32 over the fast track. However, in contrast to their Derby duel, Smith kept Lion Heart two or three paths off the rail, trying to avoid the deeper part of the track and pushing the favorite to a wider path around the turns.

The strategy was of no use. Turning for home after six furlongs in 1:11.53 and a mile in 1:36.44, jockey Stewart Elliott pulled Smarty Jones in towards the rail and through the gaping hole. Smarty Jones drew away to a five-length lead at the eighth pole and the crowd roared their approval. He galloped home to an 11-1/2 length victory, topping the winning margin of ten lengths set by Survivor in the inaugural running of this classic in 1873, and completed the 1 3/16 miles distance in 1:55.59, which was 0.30 seconds faster than the Pimlico Special on Friday. 7-1 fourth choice Rock Hard Ten, who was fractious behind the gate, refusing to load and had delayed the start, rallied down the stretch from seventh place early to finish second. 13-1 shot Eddington came from eighth late to be third. Lion Heart tired in the final quarter mile and finished fourth.

According to Equibase, the $650,000 first place purse moves Smarty Jones to fourth on the all-time list with earnings of $7,363,535. With a victory in the Belmont Stakes, he would become the 12th Triple Crown winner and would surpass Cigar as the all- time money winning horse with the $5 million bonus from Visa.

Because of changes in the policy for photo access this year, I wasn't able to get many of the shots I normally include, especially for the turf races as we were not allowed over to photograph them. I am sorry about this and I hope things are better next year! What I can salvage of the undercard and other photos, I will get online Monday after I return back home. 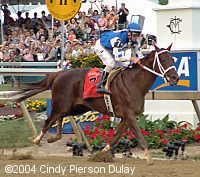 Smarty Jones at the finish, adding the Preakness to his string of victories. 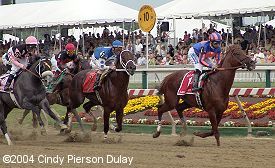 First time by the stands and it is almost a replay of the Derby with Lion Heart leading and Smarty Jones close behind. Winning jockey Stewart Elliott said, "Once I got down the backside, I was outside of Lion Heart. I seen Mike looked like he had a little trouble. He wasn't going to get him back in. My only concern was to close this, I didn't want to have the rail left wide open, me getting carried out and them have clear sailing on the inside. So it didn't seem to matter where I was on the track. My horse was just, you know, running so easy, so I just took him to the inside and he did the rest."

Smarty Jones drawing off in the stretch to win by an eventual 11 1/2 lengths, a new record for the Preakness. Elliott said, "We took the lead just turning for home, just inside the quarter pole, and I never turned my stick over. I tapped him like two or three times just to let him know it was time to go. And that was all he needed." 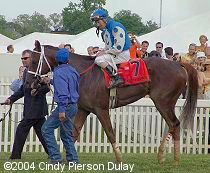 Smarty Jones and Stewart Elliott parade for the fans after winning the Preakness. Trainer John Servis said, "Somebody asked me in there if I was as confident as I was going into the Derby. I said no, I'm not. I think he's coming back in two weeks. He was a little vulnerable. I would like to have another week with him. However, with that being said, he came out of the Derby so good, we elected to come to the Preakness. I knew he had to come with his best game, and I was a little concerned about that and he, once again, everything I've asked him for, he stepped up to two plate." 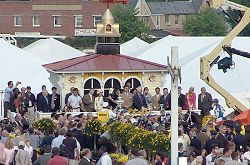 The mob scene in the winner's circle as seen from the stands. Owner Roy Chapman said, "I had to hold the tears back a little bit. Really, emotionally it really hit me just how good this horse is. I was like John, I didn't sleep too good last night. There was a lot of good horses in this race. You know, you hear about this, you hear about that. I thought he might win, but I never thought he would blow them away like he blew them away. I'm just happy." 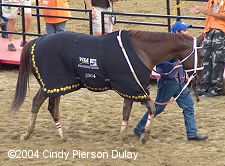 Smarty Jones heads back to the barn with his Preakness winner's blanket. Trainer John Servis said, "As far as I my horse goes, he might have been the calmest horse in the paddock in the post parade when they walked out. People were screaming and hollering, the horses were bouncing on their toes. I'm looking at him. He's walking along like he's going around the shed." 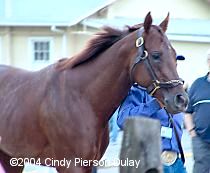 Smarty Jones arrives back at the stakes barn after clearing the test barn. 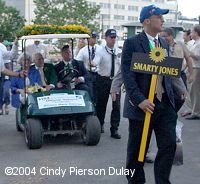 Smarty Jones' owners, Mr. and Mrs. Chapman, arrive back at the barn for the post race celebrations. Mr. Chapman said, "A lot of people really don't know what that feels like to see your horse you bet on come running down that stretch. I don't care if it's Smarty Jones or a 20 thousand dollar claimer. It's a thrill watching a horse coming down that stretch and you got to bet on him. It's a big thrill." 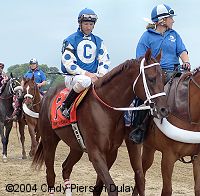 Smarty Jones in the post parade. Stewart Elliott said, "H handled the race very easily, galloped out strong and he wasn't even really blowing that hard after the race. It didn't seem like, you know, it took much out of him at all. And the mile and a half, I think he's just, you know, he'll do whatever I want him to. So I don't think that will be a problem." 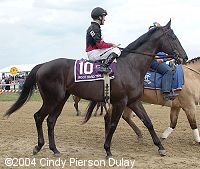 Second place finisher Rock Hard Ten in the post parade. His trainer Jason Orman said, "He got a little tired at the end, but that wasn't the difference. I have a good horse, but that was a great horse that beat us. He ran a very respectable race and I'm proud of his effort." 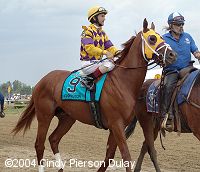 Third place finisher Eddington in the post parade. His trainer Mark Hennig said, "He was moving well late, but no one was a match for the winner."