There were 4 graded stakes races at Belmont Park on Sunday afternoon. Conditions were less than ideal,
as rain downgraded the main track and turf courses to good with temperatures in the high 50's.
The $350,000 Peter Pan Stakes (G3) featured a field of 6 three-year-olds going 1 1/8 miles around one turn of the main track, in this local prep for the Belmont Stakes. Core Beliefs was sent off as the 2-1 favorite off his third place finish in the Santa Anita Derby (G1). In to challenge him included 9-4 second choice High North, winner of the Northern Spur after finishing 7th in the Rebel (G2), and 5-2 third choice Just Whistle, a maiden win at third asking last out.

Jockey Joel Rosario sent Just Whistle to the lead exiting the chute and he set fractions of 23.92, 47.07, and 1:11.41 while pressed by Core Beliefs and stalked by High North. Entering the stretch, Core Beliefs took over from the tiring pacesetter, opening up a 2 1/2 length lead through 1 mile in 1:36.48. However 9-2 fourth choice Blended Citizen, 5th early under Kyle Frey, came out 6 wide for room and rallied late to win by 1 1/2 lengths in 1:49.75. It was a long 4 lengths back to Just Whistle third. 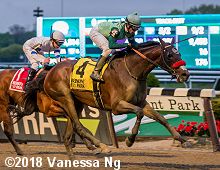 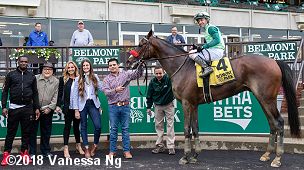 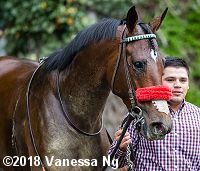 Left: Blended Citizen in the winner's circle. Jack Sisterson, assistant to trainer Doug O'Neill said, "We thought if he's going to love any track in America, it's going to be Belmont Park, so we weren't surprised with the result today. After the Bluegrass, the plan was the Peter Pan and then the Belmont. We aren't jockeys, so we didn't give Kyle any instructions. He knows the horse well and has worked him in the mornings and ridden him in the afternoon and he has a lot of confidence riding him. We'll be liking our chances in the Belmont. We wish Justify the best and hope he'll win the Preakness for a chance with a Triple Crown on the line, but we like our chances and he'll stay here and train up to it."

Right: Blended Citizen heads back to the barn after the race. Winning jockey Kyle Frey said, "Those guys broke and I think everyone was really overthinking it, not going too fast because there wasn't much speed. All that did was set it up for me because no matter what, my horse had the best final fraction of any horse in the race. So for them to put themselves right there in front of me, it couldn't have been any more perfect for me. And then, I had the cleanest trip. I was able to sneak outside, and once he got outside, I knew it was over. I should have just thrown my stick over the inside rail. I think 1 1/2 is exactly what he wants. I was super upset that we didn't get in the Derby, because I knew 1 1/4 would be just fine." 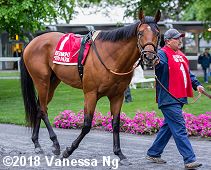 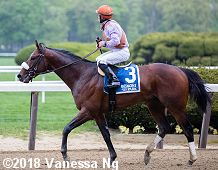 Left: Second place finisher and beaten favorite Core Beliefs in the paddock before the race. Trainer Peter Eurton said, "He bobbled a little bit at the start and then they were on me the whole way. It's a tough spot to be in but he ran well. He's getting better with each and every race. How could you feel disappointed? I was pretty happy with the way he ran. Had he won, we would probably think really seriously about staying for the Belmont, but I'm going to bring him home and talk it over with Gary (Broad, owner) and see what's best for the horse."


Kicking off the stakes quintet on Saturday, the $200,000 Vagrancy Handicap (G3) featured a field of 6 older fillies and mares sprinting 6 1/2 furlongs on the main track. Distaff Handicap (G3) winner Holiday Disguise was the 7-5 favorite over 5-2 Sounds Delicious, 2nd in the Distaff Handicap, and 3-1 Chalon, winner of the Primoneta Stakes at laurel.

Jockey Jose Ortiz sent Sounds Delicious to the lead through fractions of 22.20 and 45.12 while pressed by Chalon and stalked by 7-1 Kirby's Penny. Entering the lane Chalon gained the lead through 3/4 in 1:09.78 but jockey John Velazquez sent Kirby's Penny 4 wide for room and she powered past the pacesetters to win by 1 1/2 lengths in 1:16.42. It was another 3 1/4 lengths back to late-running favorite Holiday Disguise third. 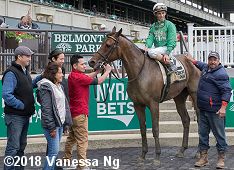 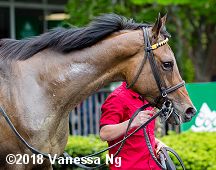 Left: Kirby's Penny in the winner's circle. Winning trainer Wesley Ward said, "I think she likes Belmont. She likes an off track. And, she got a great ride, as I always do with Johnny. For whatever reason, horses always seem to run great for him. I'm always happy to have Johnny. I can't always get him from Todd (Pletcher), that's his main man, but anytime I can, I'm very thankful to have him. I'll probably bring her back to Kentucky and freshen her up off of a big race here today and get her back sometime in Saratoga, one of the bigger races there. Ultimately, what we'll try to do is try to get her in the Breeders' Cup Filly & Mare Sprint in the fall at Churchill. She'll probably get a race in Saratoga and sometimes it rains a lot there, so hopefully we'll get lucky again, and then in the fall at Keeneland. It gets a little rainy there too. That's the key is she loves an off going."

Right: Kirby's Penny heads back to the barn after the race. Winning jockey John Velazquez said, "I went to go and get good position, and when (Chalon) went and put the other horse on the lead, it was perfect because it let somebody else put the fight on the horse in front, so we went to the outside, and she did it all after that." 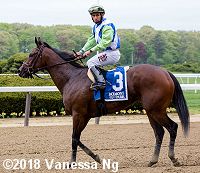 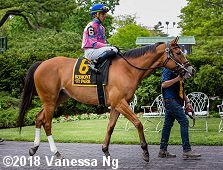 Right: Third place finisher and beaten favorite Holiday Disguise heads out of the paddock before the race. The Linda Rice trainee improved her record to 5 wins, 1 second, and 1 third in 8 starts, earning $349,1250 for owner Lady Sheila Stable.


The only ungraded stakes on the card was the $150,000 Runhappy Stakes (formerly run as the Diablo Stakes) for older horses sprinting 6 furlongs on the main track. Carter Handicap (G1) 4th place finisher Skyler's Scramjet was the 9-10 favorite in the field of 5 over 5-2 Westwood, 5th in the Commonwealth (G3), and 4-1 King Kranz, in off a 2 race win streak in allowance company.

Jockey Trevor McCarthy sent Skyler's Scramjet to lead through an opening 1/4 of 22.37 before Westwood took over on the turn through a 1/2 in 45.56. Entering the lane, Westwood continued to lead through 5f in 57.05. Skyler's Scramjet attempted to rally but Westwood, confidently ridden by John Velazquez, held him off to win by 3/4 length in 1:09.45. It was another 3/4 length back to 13-1 Always Sunshine third. 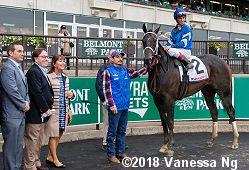 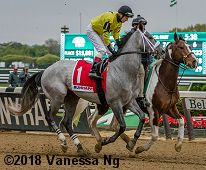 Left: Westwood in the winner's circle. Winning trainer Kiaran McLaughlin said, "He ran very well. I told Johnny it went kind of rough last time at Keeneland, there wasn't much pace, and maybe that's where we should be today maybe we don't have to be on the lead, and he rode a great race. Congratulations on Johnny winning four today. He's a very nice horse. It looks like 6f might be best for him and there's plenty of opportunities. He's a gelding so we won't think too highly looking at Grade 1s or anything, but we'll just spot him around."