The 83rd renewal of the $400,000 Prince of Wales Stakes, the second jewel in Canada's Triple Crown for 3-year-olds foaled in Canada, was run Tuesday evening at Fort Erie Racetrack over a distance of 1 3/16 miles on the main track. Conditions were less than ideal for late July at the border oval across the Niagara River from Buffalo, NY, as heavy rains passed through the area earlier in the card downgrading the originally fast main track down to sloppy and sealed, with temperatures in the low 80's feeling like the low 90's with the humidity.

A field of 6 went to post with Wonder Gadot bet down to prohibitive 2-5 odds off her win in the Queen's Plate after finishing second in the Fantasy (G3), Kentucky Oaks (G1), and Woodbine Oaks. In to challenge her included 15-4 second choice Aheadbyacentury, runner-up in the Plate after finishing 3rd in the Plate Trial, and 13-2 third choice Home Base, a supplemental entry to the Triple Crown grind after finishing 6th in the Matt Winn Stakes (G3) at Churchill Downs. Due to Wonder Gadot's heavy favoritism, show wagering was not available.

Jockey John Velazquez sent Wonder Gadot to the front first time by and she set fractions of 23.65, 48.03, and 1:12.96 while pressed by 8-1 Cooler Mike and stalked by Home Base. Turning for home, Velazquez asked Wonder Gadot to pull away and she obliged, opening up a 2 1/2 length lead midstretch through 1 mile in 39.04. Under a hand ride Wonder Gadot drew off late to win by 5 3/4 lengths over late-running Aheadbyacentury in 1:58.71 over the sloppy, sealed main track. It was a long 13 1/4 lengths back to Cooler Mike third, completing the identical trifecta to the Queen's Plate. 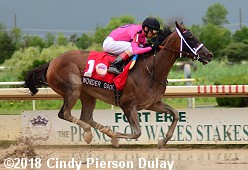 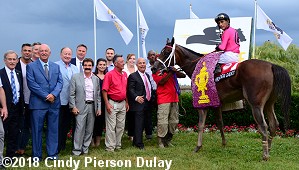 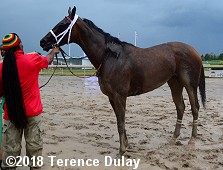 Left: Wonder Gadot in the winner's circle. Winning trainer Mark Casse said, "That's not really my call (to go for the Triple Crown sweep in the Breeders' Stakes). It's something Gary (Barber, owner) and I will talk about. There's a possibility of the Breeders', it's just very difficult as it messes up our plans a little bit. First thing, I'm going to worry about winning today. I was very concerned as she's never run on this kind of track. I was more concerned with her health. They don't come very often like this. I was seriously thinking about scratching her. I was going on the fence back and forth but I'm glad we ran."

Right: Wonder Gadot gets sprayed off after the race. Casse added, "Warming up, Johnny said she was on her toes. And the more he looked at the track he said he didn't want all that thrown back at him, so he said he was going to go for it (the lead). When he comes into the paddock he'll tell you pretty well what every horse is going to do. That's what makes him great and he's truly great." 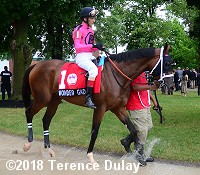 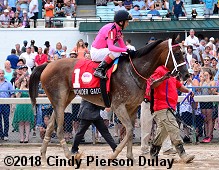 Left: Wonder Gadot splashes in the puddles in the paddock. Winning jockey John Velazquez said, "She always gives 100 percent. I'm very proud of her. It was a different surface. A different (running) style today and she responded to what I wanted her to do. I was warming her up and the more I looked at the track, I couldn't have her behind horses today. I wanted to keep her face clean. She was comfortable up front and it worked out well. I took my chances and she responded."

Right: Wonder Gadot parades for the fans after the race. Wonder Gadot is the first filly to win the Prince of Wales since Dixie Strike in 2012. They do not plan to run her in the final leg of the Canadian Triple Crown, the Breeders Stakes on the grass in August. 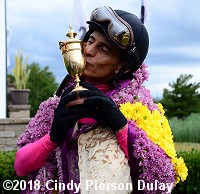 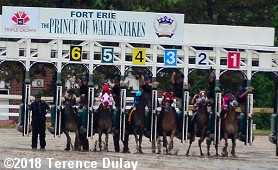 Left: Jockey John Velazquez celebrate with the trophy. Casse added, "It's a longshot but we still want a shot to be champion three-year-old in North America. By going 1 1/2 miles on the grass, it just doesn't really fit in to what we're trying to do. Right now, she's running on the dirt and going 1 1/8, 1 3/16 and 1 1/4. To go 1 1/2 on the grass in all honesty, her least preferred surface in my opinion is the grass. We'll probably try to go to the Alabama and then the (Breeders' Cup) Distaff. We know she likes Churchill Downs, so that's definitely something we're going to point for as well. I have the utmost respect for Monomoy Girl and she'll be tough, but if anybody can beat her I think we can. We're not giving up. Now we know she likes Tapeta, slop, turf, and dirt. We've pretty well got it covered. She's an amazing horse. She's Wonder Woman. She just gets bigger and stronger."

Right: The horses break from the gate for the Prince of Wales. Velazquez added, "She's never been on the lead with me on her. We've been close to the lead but not on the lead. We learned something new about her today." 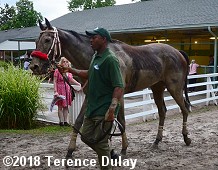 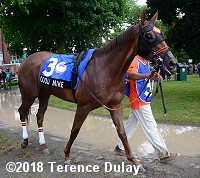 Left: Second place finisher Aheadbyacentury heads back to the barn after the race. Jockey Luis Contreras said, "I had a great trip. I saved as much ground as I wanted and he moved pretty good into the second turn. Turning for home, Johnny (Velazquez) looked back and just opened up. He had too much. My horse handled the track really well and I'm pretty happy with him."

Right: Third place finisher Cooler Mike did not want to step in the puddles in the paddock! The 8-1 fourth choice pressed the pace under jockey Jesse Campbell, but tired late to finish 3rd beaten 19 lengths. The Nicholas Nosowenko improved his record to 3 wins, 2 seconds, and 2 thirds in 10 starts, earning $262,408 for owner-breeder Mike and Nick Nosowenko.