One of the biggest handicap division races of the year is the Pimlico Special (G1), run on the Friday before the Preakness at 1 3/16 miles for a purse of $500,000. This year Southern Image, coming off two straight wins in $1 million races at Santa Anita, took home the big prize and increased his record to six wins in seven starts. He has won three Grade I stakes, including the Malibu in December and the Santa Anita Handicap.

Also on the card today were the Black-Eyed Susan for the 3-year-old fillies and two additional graded stakes. Check here for the results of those races. 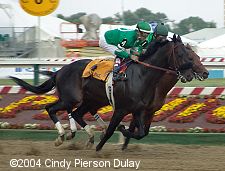 First time by the stands and it is already Southern Image (outside) and Midway Road duelling for the lead. 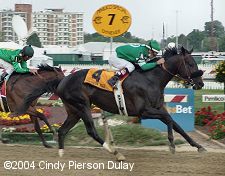 Southern Image in front at the finish. Winning jockey Victor Espinoza said, "That was quite a stretch duel. I didn't know when we would go by, but I had confidence we would. I thought I had much the best horse and that's why I didn't want to move too soon." 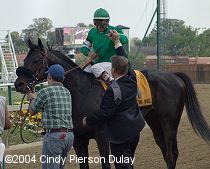 Trainer Mike Machowski congratulates Victor Espinoza after the race. He said, "I was pretty confident. My horse was going so easy about the five-eighths pole I knew we were going to be pretty tough. My only question at quarter pole was where was Midway Road and I saw him looming up, but I knew my horse had something left, so I was pretty confident all the way around." 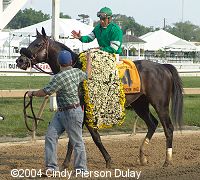 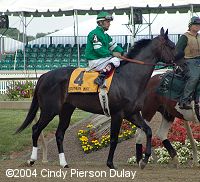 Southern Image and Victor Espinoza in the post parade. Trainer Mike Machowski said, "Victor rides this horse like a dream. He puts him in perfect position every time. It was his best effort yet. He's still going forward and I don't think we've hit the bottom with him. My whole goal from day one was to get him to relax. He's come a long way." 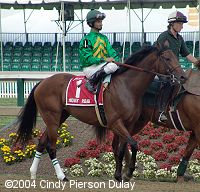 Second place finisher Midway Road in the post parade. Trainer Neil Howard said, "He is a hell of a horse. He was trying to come back at the end so hard, but he just couldn't get there. This was a tough race and it was very hard to figure because of the balance. Robby nursed him along beautifully. It would have been a hell of an accomplishment for him to win this race because these Grade 1s are so hard to win." 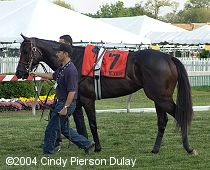 Post-time favorite Dynever who finished fifth. His jockey Corey Nakatani said, "The way the track was playing today I thought they would come back to me. I thought I had a lot of horse, but after he changed leads he was spinning his wheels. I guess the track was too heavy."