The fourth running of the $3 million Pegasus World Cup Invitational (G1) presented by Runhappy for older horses was contested on Saturday afternoon at Gulfstream Park in Hallandale Beach. Conditions were excellent in South Florida, with sunny skies and temperatures in the mid 70's, with the main track rated fast. After Omaha Beach and Spun to Run scratched on Thursday, a field of 10 older horses contested this 1 1/8 mile main track feature, with Pacific Classic (G1) winner Higher Power sent off as the 11-4 favorite off third place finishes in the Awesome Again (G1) and Breeders' Cup Classic (G1). In to challege him included 7-2 second choice Mucho Gusto, third in the Travers (G1) before finishing a disappointing 4th in the Oklahoma Derby (G3), and 4-1 third choice Tax, 2nd in the Discovery (G3) last out. Note that the entire field competed without race day medication. 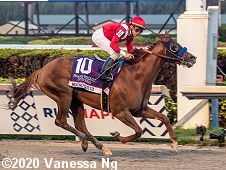 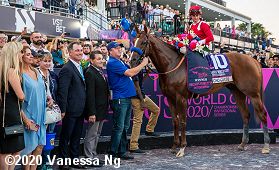 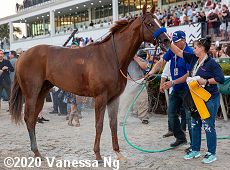 Left: Mucho Gusto in the winner's circle. Winning trainer Bob Baffert said by phone from California, "I was going to run in the San Pasqual next week but after he worked so well I thought, 'You know what, I'm just going to take a shot at the mile-and-an-eighth and maybe that will get him ready.' He didn't get an invite to the Saudi Cup, so I thought maybe if he runs well enough he'll get an invitation. I told Irad to warm him up well so that he would get away from there, and he did. He could have won from the 12-hole. He just showed up."

Right: Mucho Gusto gets hosed off after the race. Winning jockey Irad Ortiz Jr. said, "I had a great trip. He got a great start and felt good. He relaxed so well and we were able to save ground. At the three-eighths pole I tipped him out and he took off. He was much the best. I think he just took off and opened up easy. He's a nice horse." 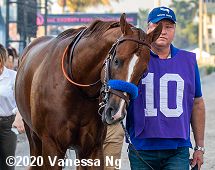 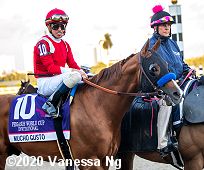 Left: Mucho Gusto in the paddock.

Right: Mucho Gusto in the post parade. Baffert added, "Who would know that the race fell apart there [with the scratch of Omaha Beach and Spun to Run], unfortunately. But he looked great in the warm-up; Irad Ortiz did a pretty masterful job. He had me a little bit worried the way he was down inside like that, but he knew what he was doing. When he tilted out at the quarter pole, all I could say was 'Damn, I wish I would have flown down there!' But it was pretty exciting." 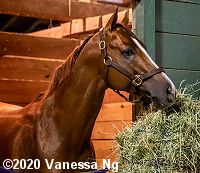 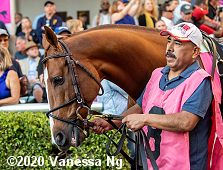 Left: Mucho Gusto back at the barn after the race.

Right: Second place finisher Mr Freeze in the paddock before the race. Trainer Dale Romans said, "That was the plan (to go to the front). He didn't break as clean as I would have liked but he got there and he had a good pace and ran a good race. He was training as good as a horse can train and he ran huge. I thought he ran a beautiful race. We've had confidence in him and he ran the way we thought he would." Jockey Luis Saez added, "He never gave up. He was brave. He was trying very hard; I thought we were going to win for a second. He never gave up. He missed the break a little but then when he saw the clear he went pretty nice. I felt like he was very comfortable." 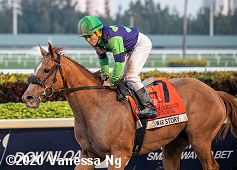 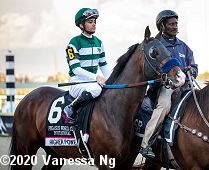 Left: Third place finisher War Story returns after the race. Jockey Joel Rosario said, "He had a good trip. He went back like the way he wants to run and he came running nice in the end," Rosario said. "I thought for a second we'd get second, but he ran well." Trainer Elizabeth Dobles added, "I feel great. I think if we were a little closer there was a chance we could have won, but the horse does his own thing and it wasn't his day. We can always come back and get them next time."

Right: Last place finisher and beaten favorite Higher Power in the post parade. Jockey Flavien Prat said, "I thought I was in a good spot. Mucho Gusto was inside me; I thought he was the horse to beat. As soon as we got to the half, I was done. Instead of picking up the bit like he did in the Pacific Classic, he just dropped the bit and sat back, don't know why." 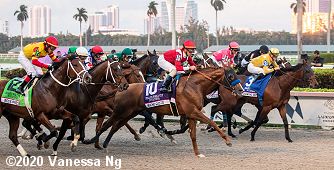 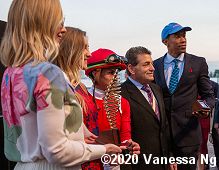 Left: The start of the Pegasus World Cup.

Right: The trophy presentation for the Pegasus World Cup. Jimmy Barnes, assistant to trainer Bob Baffert said, "He has just been training so well. After that freshening he really seemed to grow and get back to the way he was when we first got him. Did I think he was going to crush them like that? No. That was impressive."