The co-feature on Saturday at Parx Racing near Philadelphia was the $1 million Pennsylvania Derby (G1) for 3-year-olds going 1 1/8 miles on the main track. Conditions were excellent, with sunny skies and temperatures near 70, with the main track fast and the turf good. McKinzie was sent of as the lukewarm 2-1 favorite in the field of 9, unraced since winning the Sham (G3) at Santa Anita and finishing first but disqualified to second in the San Felipe (G2). In to challenge him uincluded 9-2 second choice Bravazo, third in the Travers (G1) after finishing second in the Haskell (G1), and 5-1 third choice Instilled Regard, unraced since 4th in the Kentucky Derby (G1).

Also on the card was the Cotillion Stakes (G1) won by Midnight Bisou (by DQ). 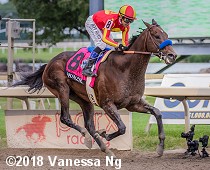 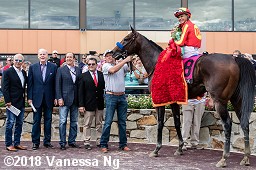 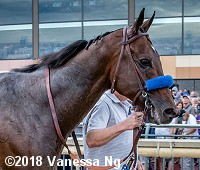 Left: McKinzie in the winner's circle. Winning trainer Bob Baffert, celebrating his 3rd Pennsylvania Derby win, said, "I always felt like he was the best 3-year-old, and then he got hurt and Justify picked it up. He has come back with the time off and has responded really well. It was good to see him get back in the game. It was a pretty tall order to go 1 1/8 miles off that kind of layoff. But you can do it with good horses. I thought we had him pretty tight. I felt like he was the best horse. If you had asked me on January 1, I would have told you we were going to win the Kentucky Derby with that horse. It's good to have him back. He ran great. The track was deep today."

Right: McKinzie heads back to the barn after the race. 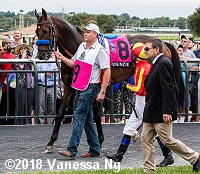 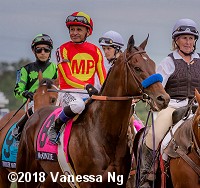 Left: McKinzie in the paddock before the race. Winning jockey Mike Smith said, "If anything can be taken away from the sting of a Triple Crown horse retiring, it's a horse like this. He is an incredible horse. Really, really proud of him. Bob had him ready. To come off the bench at 1 1/8, Bob is just a tremendous trainer and to get him ready. I felt very confident that I could be aggressive early and move a little early because I knew I had Bob ready." 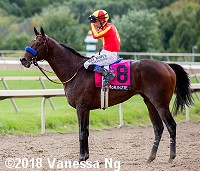 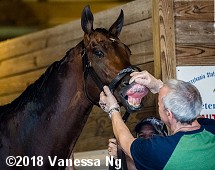 Left: McKinzie returns after the race. Smith added, "He is still learning as well. Although he has raced, he had a lot of time off. He got to looking around, looking at the tracks and, I had a really good hold of him today. I didn't really want to bother anyone. The last time I rode him, we got disqualified, of course. I picked his head up and when I asked him to finish, he really got underneath me and really galloped out really well."

Right: McKinzie gets IDed in the test barn after the race. 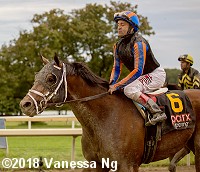 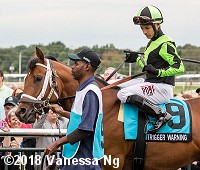 The horses break from the gate for the Pennsylvania Derby.

The first of three graded stakes on Saturday was the $300,000 Gallant Bob Stakes (G3) for 3-year-olds sprinting 6 furlongs on the main track. Dwyer (G3) winner Firenze Fire was sent off as the 7-5 favorite in the field of 8 off his 3rd place finish in the Allen Jerkens (G1). In to challenge him included 2-1 Engage, 4th in the Allen Jerkens, and 13-2 Seven Trumpets, 2nd in the Allen Jerkens.

Jockey Edgar Prado sent 15-2 Forced to the lead exiting the chute through a quarter in 21.91 while pressed by 7-1 War Giant and stalked by Firenze Fire. On the turn, jockey Irad Ortiz Jr. sent Firenze Fire to the lead past the tiring pacesetters through a half in 45.82. Entering the stretch, jockey Jeremy Rose, 7th early aboard 17-1 Whereshetoldmetogo, came out wide to gain a short lead through 5f in 58.44. The pair dueled to the line, with Whereshetoldmetogo leaning over to bite Firenze Fire inside the 1/16 pole, but Firenze Fire fought back to win by a head in 1:11.27. It was another 1 1/2 lengths back to Seven Trumpets third. There was a brief inquiry into the stretch run incident but because Firenze Fire finished in front, there was no change to the finish order. 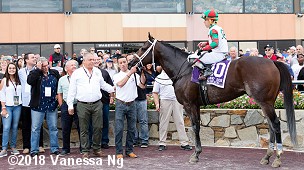 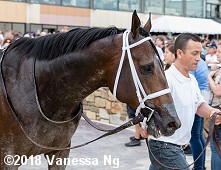 Left: Firenze Fire in the winner's circle. Winning trainer Jason Servis said, "The horse ran super. He just ran smooth. Irad saved all the ground all the way around. We go to the Breeders' Cup Sprint now, what can I say. That's got to put him over a million dollars. I mean he's been great. Ron (owner/breeder Lombardi) had the mare sitting, didn't want to breed her, then he ended up breeding her. He's a special horse. We have the option to do the Mile or the Sprint, but I'll talk to Ron. We'll see."

Right: Firenze Fire heads to the barn after the race. Jockey Irad Ortiz Jr. said, "He tried to bite me. Jeremy (Rose aboard Whereshetoldmetogo) told me he tried to bite me but nothing happened." 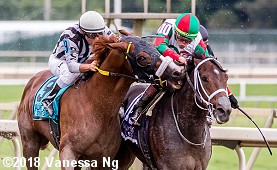 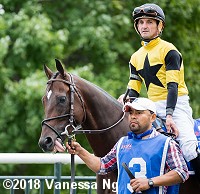