The highlight race of the Del Mar summer meeting is the $1 million TVG Pacific Classic (G1), featuring the best older horses of the west coast going 1 1/4 miles, and is a Breeders' Cup Challenge "Win and You're In" qualifier for the Classic. Just 20,823 fans came out to the seaside oval on Saturday afternoon under partly cloudy skies and temperatures in the high 80's. As expected, Santa Anita Handicap (G1) and Gold Cup at Santa Anita (G1) winner and last year's 3rd place finisher Accelerate was sent off as the prohibitive 2-5 favorite in the field of 7. In to challenge him included 6-1 second chice Pavel, winner of the Stephen Foster Handicap (G1), and 25-4 third choice Roman Rosso, winner of three straight, the Provincia de Buenos Aires (G1) and Nacional (G1) in Argentina then the Latinoamericano (G1) in Uruguay.

Jockey Flavien Prat sent Roman Rosso to the lead first time by and he set fractions of 23.05, 46.69, and 1:11.25 over the fast main track while pressed by 15-1 Prime Attraction and stalked by Accelerate. Around the turn, jockey Joel Rosario moved Accelerate 3 wide to pass the pacesetters, and he quickly opened up a 4 length lead through 1 mile in 1:36.11. Kept to task by Rosario, Accelerate powered away from the field finishing a stakes record 12 1/2 lengths clear of late-running Pavel in 2:01.83. It was another 3 3/4 lengths back to Prime Attraction third. 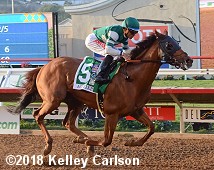 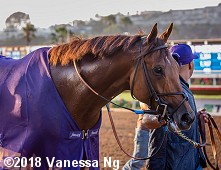 Left: Accelerate in the winner's circle. Winning owner Kosta Hronis said, "We don't get to see a lot of 5-year-old horses anymore. So this was great that he was able to stay on the track for another year and really mature and get better, and that's what he has done. I'm so happy for John Sadler. This is his first Pacific Classic win and for this horse to be a part of it is such an honor. We're happy for us, of course, but we're so happy for John. He's done so much and he's meant so much to us. He's more than a trainer. He's trained the horses and he's trained us. We had no idea about the horse racing business when we got involved in 2010. We thought we knew something. We knew nothing."

Right: Accelerate heads back to the barn after the race. Winning trainer John Sadler said, "It was very impressive. He's been good on this track, he's won stakes here every year. He's better this year so you had to figure he'd be better on this track this year. The only thing I was nervous about was Joel (Rosario). I told him 'Ride him like he's the best horse. Don't let anything cheap get in front of you. Stay in contact with the leaders'. He did that so I knew (Accelerate) would kick in well." 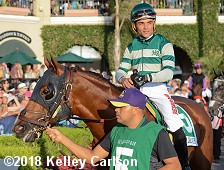 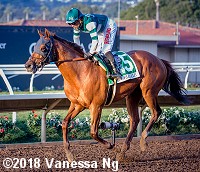 Left: Accelerate in the paddock before the race. Winning jockey Joel Rosario said, "He's a very nice horse. He put me in a good place and took me to the outside and we went from there."

Right: Accelerate returns after the race. Sadler added, "I wanted to keep (stablemates Accelerate and Catalina Cruiser) separated. We had the best horse and the second best horse and we wanted to use them in different races. (His personal feeling at the moment?) Just relief. I thought we had the best horse. He had a really good week. I woke up this morning refreshed. The toughest thing all day was getting into the parking lot." 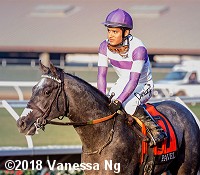 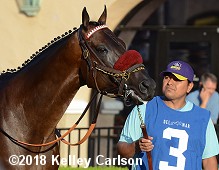 An hour before the Pacific Classic was the $300,000 Del Mar Oaks (G1) Presented by The Jockey Club for 3-year-old fillies going 1 1/8 miles on the turf. Summertime Oaks (G2) winner Ollie's Candy was sent off as the 9-5 favorite in the field of 12 exiting her close second in the San Clemente (G2). In to challenge her included 4-1 second choice Colonia, winner of the Hatoof at Arlington, and 9-2 third choice Paved, 8th in the Belmont Oaks Invitational (G1) after winning the Honeymoon (G2).

Jockey Tyler Gaffalione sent 14-1 Animosity to the lead exiting the infield chute through fractions of 23.26 and 47.01 over the firm going while pressed by 13-2 fourth choice Ms Bad Behavior and stalked by Ollie's Candy. into the far turn, Ms Bad Behavior took over through 3/4 in 1:12.31. Entering the lane, Tyler Baze sent favorite Ollie's Candy to the front through 1 mile in 1:36.15. However, 7-1 fifth choice Fatale Bere, 8th early under Kent Desormeaux, came out 5 wide for the drive and rallied to get up by a neck in 1:48.14. It was another 2 lengths back to 16-1 Californiagoldrush third. 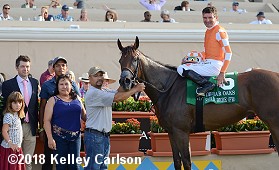 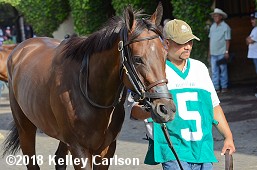 Left: Fatale Bere in the winner's circle. Winning trainer Leonard Powell, celebrating his first Grade 1 said, "It does a little (compensate for Beach View's scratch in the Pacific Classic). To win a Grade I is of great value and this is a filly that I scouted a year ago in France and purchased privately for owners that have been very loyal to the stable. The only instructions I said to Kent (Desormeaux) was to keep her covered up early. If you don't keep her covered up, she's rank, she pulls, sometimes the saddle goes forward. So the key is to keep her covered up, and then she's good enough to do the job."

Right: Fatale Bere in the paddock before the race. Winning jockey Kent Desormeaux said, "It was the trip. Today, I got the trip; last time (Belmont Oaks on July 7) I had to go their way. This time I got to let her go when I was ready. Felt good; she was really running. They were playing ping-pong by the three-eighths (pole) (when race leader Animosity brushed the fence and caused issues with other horses), but I avoided all of that and just got to run my race. Good stuff." 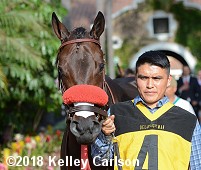 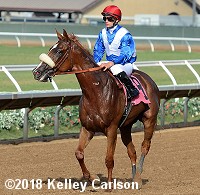 Left: Second place finisher and beaten favorite Ollie's Candy in the paddock before the race. Jockey Tyler Baze said, "She was on it today. Ran a really good race. She was push button."

Kicking off the stakes action on Saturday was the $250,000 Del Mar Handicap (G2) Presented by the Japan Racing Association for older horses going 1 3/8 miles on the turf, and is a "Win and You're In" qualifier for the Breeders' Cup Turf. Last year's runner-up Itsinthepost was sent off as the 5-2 favorite in the field of 11, winner of the Charles Whittingham (G2) but 9th in the Eddie Read (G2) last out. In to challenge him included two horses as co-second choices at 4-1, Fashion Business, winless since a May allowance and 8th in the Eddie Read (G2), and Multiplier, 5th in the Eddie Read.

8-1 Ashleyluvssugar was quickest away through an opening quarter of 24.64 before 11-2 Kenjisstorm took over first time by through fractions of 48.91, 1:13.60, and 1:38.10 while pressed by 13-1 Cashman and stalked by Itsinthepost. Turning for home, Kenjisstorm tired badly as Fashion Business, 9th early under Flavien Prat, came out 4 wide for room before ducking back to the rail, opening up a 4 length lead midstretch through 10f in 2:02.07. Kept to task by Prat, Fashion Business cruised to a 5 1/4 length win over late-running 45-1 longest shot Ya Gotta Wanna in 2:13.84. It was another 1 1/4 lengths back to Multiplier third. Favorite Itsinthepost weakened late to finish 7th beaten 8 1/2 lengths. 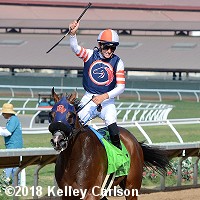 Left: Fashion Business in the winner's circle. Winning trainer Phil D'Amato said, "I thought he was going to come running. I think Flavien (Prat) just sensed they were going so slow it was a now or never type move. His race at Belmont was actually way better than it looked. He was in a blanket finish and then the horse that finished behind him came back and won the Arlington Million. So it was a very productive race. The last race (Eddie Read Stakes) -- the 1 1/8 -- we used as a prep for this race and it just worked out perfect."

Right: Fashion Business returns after the race. Winning jockey Flavien Prat said, "On the backside I could tell they were going slow and I went a little wide around there. I know it takes a little time to go around. I just kept digging in and he just finished. I had a pretty clean trip." 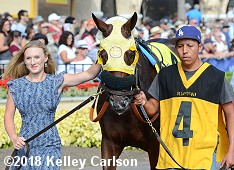 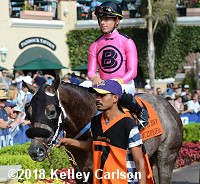 Left: Second place finisher Ya Gotta Wanna in the paddock before the race. Jockey Tiago Pereira said, "Pace a little slow. When I pushed to the outside he picked it up and he came strong down the stretch."

Right: Third place finisher Multiplier in the paddock before the race. Jockey Tyler Gaffalione said, "I got a little wide around there, but the post position didn't help. He ran a very game race and finished up good." 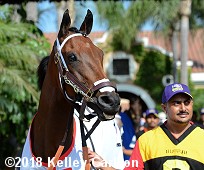 Seventh place finisher and beaten favorite Itsinthepost heads into the paddock before the race. The Jeff Mullins trainee has a record of 10 wins, 7 seconds, and 6 thirds in 37 starts, earning $1,241,402 for owner Red Baron's Barn LLC. 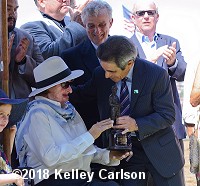 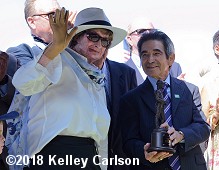 Trainer Martine Bellocq was presented with the 2018 Laffit Pincay Jr. Award, which recognizes integrity, dedication, determination and distinction. She suffered burns to 60% of her body while trying to save horses during the December 7 Lilac wildfire at San Luis Rey Downs. She said, "My spirit is strong. Horse people are so tough. If you fall off a horse, you have to get back on. Everybody was a hero that day." Talking about her numerous surgeries, she added, "I know how I feel and my children and my grandchildren they say 'Mami You Look Wonderful we don't care about your eyes or your leg,' they kiss me they hug me and they say 'when are they are going to fix you because you're going to look beautiful.'" Retired jockey Pincay said, "When I heard about what Martine went through for her horses, I knew she was meant to be honored. What she did was unbelievable. It shows how much she loves her horses. It's inspirational." Del Mar CEO Joe Harper said to her, "You're an inspiration to all of us."