The $1.25 million Longines Kentucky Oaks (G1) at 1 1/8 miles is the premier race in the country for 3-year-old fillies, and is the female counterpart to the Kentucky Derby. A field of 9 faced the starter in the 146th renewal of this 1 1/8 mile main track feature at Churchill Downs, run on Friday under partly cloudy skies and temperatures in the low 80's. Due to the global coronavirus pandemic, Derby week was postponed from May to September, but despite efforts by track officials, racing continues to be conducted without spectators, with just essential horsemen, officials, and very limited media allowed to attend.

As expected, undefeated Gamine was sent off as the 7-10 favorite off wins in the Acorn (G1) at Belmont and Test (G1) at Saratoga. In to challenge her included 5-2 second choice Swiss Skydiver, winner of the Santa Anita Oaks (G2) and Alabama Stakes (G1) and was 2nd against males in the Blue Grass (G2), and 11-2 third choice Speech, winner of the Ashland (G1) after finishing 2nd in the Santa Anita Oaks.

Jockey John Velazquez sent Gamine to the lead first time by and she set fractions of 23.39, 47.92, and 1:12.12 while pressed by 15-1 Shedaresthedevil and stalked by Swiss Skydiver. Turning for home, jockey Florent Geroux moved Shedaresthedevil to challenge and she took over through 1 mile in 1:35.87. Kept to task by Geroux, Shedaresthedevil pulled away to win by 1 1/2 lengths over Swiss Skydiver in a new stakes record of 1:48.28, 36/100 seconds faster than Bird Town in 2003. It was another 1 1/2 lengths back to favorite and pacesetter Gamine third. 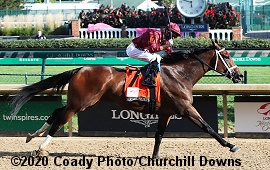 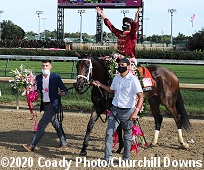 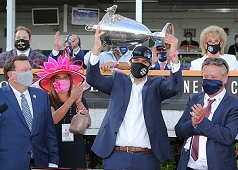 Left: Shedaresthedevil heads to the winner's circle. Winning trainer Brad Cox said, "This is why you wake up every morning to get to win races like this. This filly has been really impressive coming into the race and when she breezed with Monomoy Girl a couple weeks ago, we knew how well she was training. There were some tough fillies in the Oaks this year with Swiss Skydiver and Gamine. We are so thrilled to win a race like this, again, in our backyard."

Right: Celebrating with the trophy in the winner's circle. Winning owner Staton Flurry said, "Never dreamed six months ago we would be sitting here. We knew we had a nice filly after a couple of Oaklawn races. But to come in and beat Swiss Skydiver, who crushed us in the Fantasy at Oaklawn; and Gamine, who is phenomenal, maybe one of the best fillies we've seen in a long, long, long time, to come in and beat both of those, I don't think I would have dreamed it. Like I said, anything better than 4th was a victory for us, just because we knew what we were running against. But at the same time, we knew we had a fresher horse coming in just because we have kind of dodged the tougher races. We went with the allowance race two races back and won it by double digits. And went into the Indiana Oaks and went in by six or seven. That was kind of the plan to come in with a fresher horse instead of knocking heads with the big ones early on." 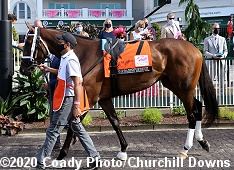 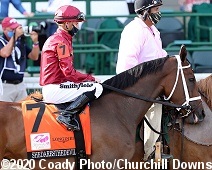 Left: Shedaresthedevil in the paddock before the race. Cox added, "She would have made a good account of herself (had she run in the Derby instead). I'm a big fan of  Tiz the Law. I'll admit that. Travers was one of the better races I have seen of any horse this year, or in years. It's a fantastic performance. If he runs that race back, he's going to be very tough tomorrow. To say she could be competitive, absolutely she could be competitive over that group."

Right: Shedaresthedevil in the post parade. Winning jockey Florent Geroux said, "Everything started in the paddock, I thought my filly looked phenomenal physically. Her mind was in business and her coat was great. She was 110% ready. She looked really, really good in the paddock. The warmup went very well. After that, when the race started, she broke extremely well, which always gives you a big advantage, gets you out of trouble right away. Actually, I broke on top of Gamine. I let Gamine go, which everyone expected her to be the quickest filly in the race early on. From there, I just let her walk out. I just used him as a target and just stayed where I was and tried to pull the trigger at the right time." 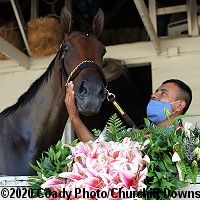 Left: Shedaresthedevil back at the barn after the race.

Right: The start of the Kentucky Oaks. Geroux added, "The horses are much calmer when there's no spectators. Horses sometimes get very excited because of the noise. So that's the main thing. That's why those races are very hard to win because those horses, they also need to be very good and very composed and very relaxed before the race, you know? So I'm not saying today was chilling, but it's not the same. Sometimes we have a very long post-race before the Oaks or the Derby. Those are young horses at 3 years old. They get excited very easily. Today it was much nicer. I don't know how many people we had.  Maybe we had 800 people, and it's pretty quiet. For those horses, it's a very good atmosphere." 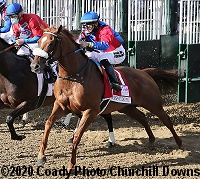 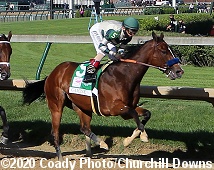 Left: Second place finisher Swiss Skydiver at the start. Trainer Ken McPeek said, "She ran super. (Shedaresthedevil) has been training extremely well. I've been watching her. That's horse racing. There's no guarantees. She's been training super. I actually wasn't as worried about Gamine as I was about another filly running a bang-up race. That's what happened."

Right: Third place finisher and beaten favorite Gamine leads around the first turn. Trainer Bob Baffert said, "That other filly was just latched on her the whole way. We were hoping to just go easy around there. But she didn't want to switch leads or anything. I kept waiting for her to just scoot away from that filly, but she just didn't have it."