Kentucky Oaks Day on Friday usually draws the second largest attendance of any raceday in North America, second only to the Kentucky Derby run the very next day. Five graded stakes were contested on the Oaks undercard, both over the main track and Matt Winn turf course. Conditions were partly cloudy, after rain in the morning, with temperatures in the mid 70's but extreme humidity. As a result, both tracks dried during the card, starting off sloppy (main) and good (turf) and ending off fast and firm in time for the Oaks. There were 105,719 fans in attendance, a 7% decrease from last year which had more favorable weather conditions. Wagering from all-sources on the full Kentucky Oaks Day race card totaled $60.2 million, an 8% increase over the previous wagering record total of $55.8 million in 2018.  Churchill Downs track president Kevin Flanery said, “Congratulations to the connections of Serengeti Empress and special thanks to all of the horse owners, trainers and jockeys who participated in today’s races. Today’s record handle shows that the Kentucky Oaks has established itself as one of the world’s most popular events.”

The first Grade 1 stakes of the Churchill Downs meeting is the $500,000 La Troienne Stakes (G1) for older fillies and mares going 1 1/16 miles on the main track. Breeders' Cup Distaff (G1) 4th place finisher Blue Prize was sent off as the 9-4 favorite in the field of 9 over 7-2 Divine Miss Grey, winner of the Heavenly Prize Invitational, and 9-2 Secret Spice, winner of the Beholder Mile (G1). 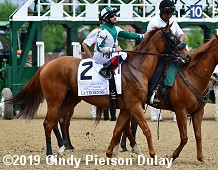 Left: She's a Julie in the winner's circle. Winning trainer Steve Asmussen said, "I felt this would be the right spot for her. I got extremely nervous with all the rain this morning, with a sloppy track. It seemed like her sloppy track run last season caused the dip. But she's a Grade I-winning mare and deservedly so. I got concerned going into the second turn, it seemed that she had to wait for traffic a bit. But she showed her heart. She's a monster physically, and it just shows that time helped her come together."

Right: Third place finisher and beaten favorite Blue Prize in the post parade. Jockey Joe Bravo said, "I am proud of her. I think the extra distance will help her in the future. That was her first start back this year. The first two finishers pulled away but if you watch our gallop out, it was great. I have great hope for her next start."

Kicking off the stakes action on Oaks Day, the $250,000 Eight Belles Stakes (G2) featured a field of 9 three-year-old fillies sprinting 7 furlongs on the main track. Purple Martin Stakes winner Break Even was sent off as the 2-1 favorite over 4-1 Mother Mother, 2nd in the Beaumont (G3), and 11-2 Queen of Beas off 2 allowance wins. Jockey Shaun Bridgmohan sent Break Even to a clear lead out of the chute through fractions of 22.08 and 44.14 over the sloppy track while 3 lengths clear of 8-1 Lyrical Lady and Mother Mother. Entering the stretch, Break Even opened up a 4 length advantage through 3/4 in 1:08.88. 23-1 Bell's the One put in a strong rally from 6th to no avail as Break Even cruised to win by 5 1/2 lengths in 1:22.13. It was another 1 1/2 lengths back to late-running Queen of Beas third. 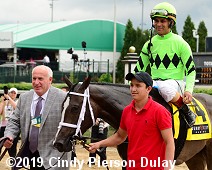 Left: Break Even in the winner's circle. Winning trainer Brad Cox said, "She's so fast out of the gate, she's just a natural. I don't think you can teach that. For her to get away and go :44, I saw that and was like ‘wow' but then I looked back and I saw the other horses starting to knuckle down and Shaun still has a hold of her. We thought there was a little bit of a question mark going seven-eighths, but when you're in front by two or three (lengths) and you're into the bridle, you wouldn't trade spot with anybody."

Right: Break Even heads into the winner's circle. Winning jockey Shaun Bridgmohan said, "She's a very special filly and thanks to (owner) Richard (Klein) for putting me back on her coming off an injury. He believed in me and I believed in the filly and she is pretty special. Today was a real question for her. Everything she's done so far has been so easy on her and today I (tapped) her a couple of times and once I did she really responded well."

The $250,000 Twin Spires Turf Sprint (G3) featured a field of 7 older horses sprinting 5 1/2 furlongs on the Matt Winn Turf Course. Carter Handicap (G1) winner World of Trouble was sent off as the 3-10 favorite over 6-1 Undrafted, 7th in the Woodford (G2), and 8-1 Chaos Theory, 4th in the Shakertown (G2). Jockey Manny Franco sent World of Trouble to the lead immediately through fractions of 23.07 and 46.07 while pressed by 12-1 Angaston and stalked by 9-1 Will Call. Turning for home World of Trouble opened up on the field through 5f in 57.80. Kept to task by Franco, World of Trouble drew off to win by 3 3/4 lengths over 31-1 longest shot Smart Remark in 1:03.97 over the firm going. It was a neck back to Chaos Theory third.
Results chart from DRF 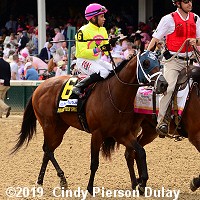 Left: World of Trouble in the winner's circle. Winning trainer Jason Servis said, "He's a runner, man. I've got a mare I can't wait to breed to him. Turf, dirt, mud, everything it doesn't matter to him. Mr. [Michael] Dubb says his speed numbers are better on turf.  Next? Maybe the Jaipur or the Vanderbilt."

Right: World of Trouble returns after the race. Winning jockey Manny Franco said, "He's such a classy horse. I've been on him in the past and I knew how fast he was. All credit goes to Jason because you know when you ride one of his horses they're always ready to fire." 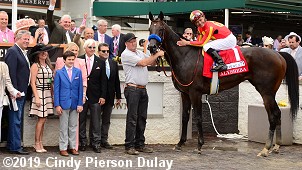 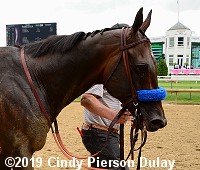 Left: McKinzie in the winner's circle. Winning jockey Mike Smith said, "He was telling me he wasn't ready to go, he was kind of slipping around down there and I said let me give him a breather here and see what he does. And I kind of took a hold of him and he backed up nice and I said OK ‘come on, come on' and all of the sudden he filled up with air and then I needed some room bad at that point because I was going to run over somebody. I did that on purpose. Again, nine times out of 10 it would never work and I would never do that but he was telling me to do it and I listened to him. You'd be surprised when you listen, things seem to pay off a lot more."

Right: McKinzie heads back to the barn. Winning trainer Bob Baffert said, "I knew if there was one horse who can't get beat this week it was this guy right there. He was going to set the tone for us. He's been training well but you have to win to get it going. Especially this horse. He's had some tough breaks, tough losses. I was a little bit worried about him down the backside. Mikey got in a hole on him and I thought ‘not again'. But I think we're learning more about this horse and the way he wants to run. I think he wants to run that way. They had him in a good pocket but when he made that move I knew it was going to be over."

The $250,000 Edgewood Stakes (G3) featured a field of 7 three-year-old fillies going 1 1/16 miles on the turf. Breeders' Cup Juvenile Fillies Turf (G1) winner Newspaperofrecord was sent off as the 1-5 favorite over 5-1 Concrete Rose, winner of the Florida Oaks (G3), and 6-1 Cambier Parc, winner of the Herecomesthebride (G3). Jockey Irad Ortiz sent Newspaperofrecord to the front first time by through fractions of 23.53, 47.87, and 1:12.68 while pressed by 42-1 Destiny Over Fate and stalked by 20-1 Fortunate Girl. Turning for home, Newspaperofrecord continued to lead through 1 mile in 1:37.10 but Concrete Rose, 4th early under Julien Leparoux, came out for room and rallied by to win going away by 3 3/4 lengths in 1:43.34 over the "good" turf course. It was another 2 1/2 lengths back to 13-1 Winter Sunset third. 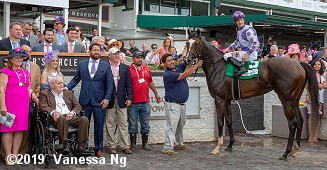 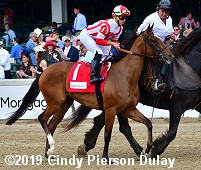 Left: Concrete Rose in the winner's circle. Winning trainer Rusty Arnold said, "She had one bad race (8th in the Breeders' Cup Juvenile Fillies Turf), there were a lot of reasons for that. We ran her back pretty quick, she's matured a lot at 3 and ran a good race. She beat a couple of good horses in there. I would have preferred for it not to have rained. But this turf is really fresh, we've only run on it three days. We got in on it in a lot better spot than last fall. I'm only looking to get beyond today. I was waiting until we got to here."

Right: Second place finisher and beaten favorite Newspaperofrecord in the post parade. Trainer Chad Brown said, "She just wasn't fit enough today. Irad (Ortiz Jr.) said she was a little keen early on turf, it looks pretty soft, and she set some strong fractions, :47-and-change early. I was a little concerned. She just ran out of gas the last part of it. Hopefully, she gets a lot out of this race. It's unfortunate she's no longer undefeated, but we'll have to go on. We have a really good horse. We'll have to see what we'll do with her next."