Kentucky Oaks Day on Friday usually draws the second largest attendance of any raceday in North America, second only to the Kentucky Derby run the very next day. Four graded stakes races and 1 ungraded were contested over the fast main track and firm turf course on the Oaks undercard. Conditions were excellent with sunny skies and temperatures in the low 70's, with an Oaks day record 123,763 fans in attendance.

The first Grade 1 stakes of the Churchill Downs meeting is the $300,000 La Troienne Stakes (G1) for older fillies and mares going 1 1/16 miles on the main track. Royal Delta Stakes (G2) winner Sheer Drama was sent off as the 2-1 favorite in the field of 9. In to challenge her included 7-2 second choice Gold Medal Dancer, winner of the Azeri (G2) then third in the Apple Blossom (G1), and 9-2 third choice My Miss Sophia, unraced since 5th in the Lady's Secret at Monmouth in September. 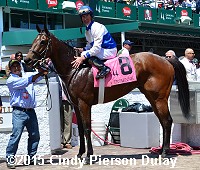 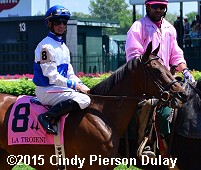 Left: Molly Morgan in the winner's circle. Trainer Dale Romans said, "The race went well. (Owner) Bill (Cubbedge) let me sit on her this winter as we didn't turn her out. We just let her stay in training and get her feet back under her. I told Bill this is what helps winning big races down the road. She came with a good performance last time and the race at Gulfstream set her up perfectly for today."

Right: Molly Morgan in the post parade. Winning jockey Corey Lanerie said, "I was able to worm my way right over to the inside. I was following Javier (Castellano) on My Miss Sophia, because I thought he had the horse to beat. It looked like about the 5/16ths pole he wasn't going anywhere, so I kind of dove inside him. I got some momentum going. I was lucky the rail never shut down on me and I was able to keep the momentum until I got through there." 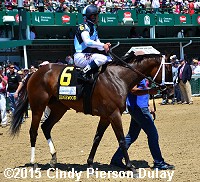 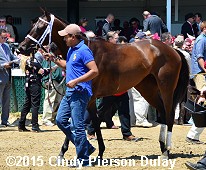 Left: Feathered heads to the winner's circle. Winning jockey Javier Castellano said, "She broke well out of the gate. I liked the way she did it today. I know it was her first time on the turf but I knew usually her best race is when she breaks well out of the gate. I took the pace and she finished really, really well. She exploded because we were able to relax in the first part. When I asked her, she took off and she was really impressive the last part of the race."

Right: Feathered after being unsaddled. Winning trainer Todd Pletcher said, "She has the size and shape of a filly that might get over the turf well. And pedigree like that, it just made sense to run her here. Plan A was actually to try and lay off the pace, but when she broke sharp and several others did not, Javier called an audible and it worked out well." 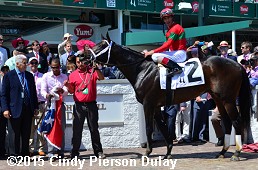 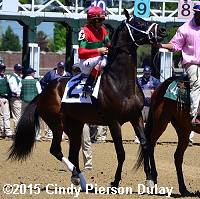 Left: Protonico in the winner's circle. Winning trainer Todd Pletcher said, "He's a horse that has won on the lead and from last. But the one thing that he always seems to do is idle when he makes the lead. Johnny said he tried to wait and he let (Noble Bird) put a head in front before he decided to fight back. It was a courageous effort. My only concern was the 22 days between races was too short but we knew he liked this track and since we are thinking about the Stephen Foster, we decided to take a chance."

Right: Protonico in the post parade. Winning jockey John Velazquez said, "He's game. Todd told me before the race, if he's laying behind somebody, when he passes, he's going to wait. And that's exactly what he did. As soon as he passed (Den's Legacy), now he waited. And now he has (Noble Bird) on the outside. The other horse passed him. Now he realized he had a horse next to him, and then he started running back. (Noble Bird) got a good neck (on Protonico). It was hard to come back, but eventually he did it." 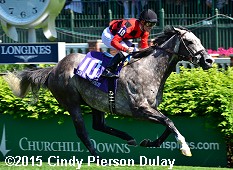 The $150,000 Twin Spires Turf Sprint (G3) featured a field of 10 older horses sprinting 5 furlongs on the Matt Winn Turf Course. Pan Zareta winner Good Deed was the 7-2 favorite over 4-1 Something Extra, winner of the Shakertown (G3), and 17-4 Heitai, winner of the Costa Rising. 5-1 fifth choice Power Alert set the pace while pressed by Something Extra and Heitei through fractions of 21.57 and 43.74 over the firm course. Power Alert continued to lead into the lane, and held off late-runnig 9-2 fourth choice Undrafted by 3/4 length in 55.17. It was another 3/4 back to Something Extra third.
Results chart from DRF 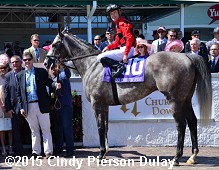 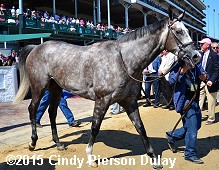 Left: Power Alert in the winner's circle. Winning jockey Julien Leparoux said, "I was very proud of the way he ran today. He was comfortable on this course and when we were challenged down the stretch, he responded nicely when I asked him for run."

Right: Power Alert heads back to the barn. Winning trainer Brian Lynch said, "He was on his game today. He got the track he likes today. I thought it would be easier on him in the Shakertown (fourth) on the soft turf at Keeneland last time, but he turned it around today. He was sharp this week. We trained him (at Keeneland) this week and he was very sharp. The way the track was playing today, I thought he'd have to be close (to the lead)." 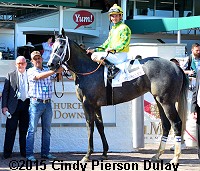 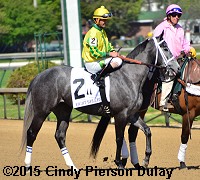 Left: Promise Me Silver in the winner's circle. Winning trainer Bret Calhoun said, "She's a special filly. I can see why she was overlooked (at odds of 5-1). She had never beaten this caliber of fillies before, but we always knew she could. We will start making plans for (the $750,000 Acorn) on Belmont Day."

Right: Promise Me Silver in the post parade. Winning jockey Robby Albarado said, "I knew I had horse (around the far turn) and I knew I had a nice quality bunch behind me but when I called on her she showed me why she's seven for seven. She's an exceptional filly, she's kind to be around and she's very nice. I think she's won at like six or seven different racetracks and that's special in and of itself. Today was a big test for her and now she'll go on to some bigger things, I'm sure."