Kentucky Oaks Day on Friday usually draws the second largest attendance of any raceday in North America, second only to the Kentucky Derby run the very next day. In contrast to the heavy rains predicted for Derby day, it was sunny with temperatures in the 80's. Five graded stakes races were contested over the fast main track and firm turf course on the Oaks undercard.

Kicking off the stakes action on Oaks day is the $400,000 La Troienne Stakes (G2) for older fillies and mares going 1 1/16 miles on the main track. It marked the return to Churchill Downs of 2009 Oaks winner and Horse of the Year, Rachel Alexandra, sent off as the 1-5 favorite in the field of 6 despite finishing second in the New Orleans Ladies last out. 31-1 Be Fair went to the lead on the clubhouse turn getting a quarter in 24.79 before Rachel Alexandra pulled up alongside her to challenge. The favorite kept her head in front down the backstretch and around the far turn through a half in 48.81 and 3/4 in 1:12.53. Entering the stretch, Be Fair tired and faded from contention, allowing Rachel Alexandra to open a short lead at the 3/16 pole. 9-1 Unrivaled Belle, who was 3rd early, made a run on the outside to set up a duel to the line. The pair battled for the final furlong noses apart, but Unrivalled Belle dug in late to win by a head in 1:42.97. It was a long 5 lengths back to 25-1 Morena third.
Full results chart from DRF 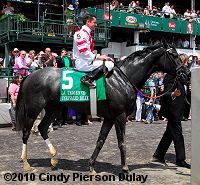 Unrivaled Belle in the winner's circle. Her trainer Bill Mott said, "I had confidence in my filly today; I thought she's run very well. But I wasn't confident we'd beat Rachel Alexandra. I mean we're talking about a champion filly, the Horse of the Year. I told Mr. (Peter, owner) Vegso to expect that we'd run well, but not that we were going to win. But here we are. My filly ran huge. She just ran great. And I don't think it was that (Rachel Alexandra) ran poorly. She ran her race, too. We just outdid her. They were eyeball to eyeball there and my filly got her. I saw at the 3/8 (pole) that Kent (rider Kent Desormeaux) was sitting there with a lot of horse. I said 'All right, we've still got something in the tank.' She ran great through the lane - all heart." 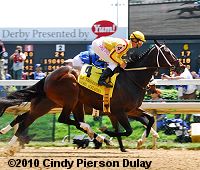 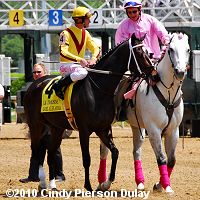 Beaten favorite Rachel Alexandra in the post parade and leading first time by. Her trainer Steve Asmussen said, "She's just not been as fast as last summer. She ran a good race, but not a great race. She does carry a lot more weight. Calvin (Borel) did absolutely nothing wrong today. I thought he got along with her great today. There's an old adage in racing: You get paid for what you do, but you pay for what you do. I think there's some hangover. What we have to realize is there has been improvement since her last race. We don't need a knee-jerk reaction. The defeat last time put a lot of pressure on. You don't run a horse expecting to get beat, especially Rachel."

The $100,000 Kentucky Juvenile Stakes (G3) featured a field of 5 two-year-olds sprinting 5 furlongs on the main track. 9-10 favorite Twelve Pack Shelly was sent to the lead on the outside through fractions of 21.92 and 45.17. Entering the stretch, 7-2 third choice Lou Brissie came out wide for the drive to challenge the pacesetter. Lou Brissie passed the tiring Twelve Pack Shelly at the 1/8 pole and drew off to win by 1 1/2 lengths over late closing 11-1 Boys at Tosconova in 57.80. It was just a neck back to favorite Twelve Pack Shelly third.
Full results chart 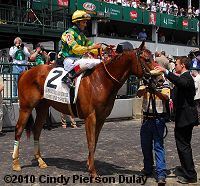 Lou Brissie in the winner's circle. His jockey John Velazquez said, "I didn’t want to be too far back and have too much dirt hitting him and get discouraged. Once I got him in the clear and the 5/16 pole, he got into a good rhythm and I just kept him there. Down the lane I just had to keep him mind on running. The way his personality is, in the future going longer will be better.”

The $100,000 Churchill Downs Turf Sprint (G3) featured a field of 11 older horses go 5 furlongs over the Matt Winn Turf Course. 4-1 third choice Starfish Bay battled for the lead down the backstretch with 24-1 Central City through fast fractions of 21.25 and 43.57. Central City held a short lead in midstretch, but 5-2 favorite Silver Timber and 7-2 second choice Chamberlain Bridge were closing late down the center of the course. Silver Timber reached the line a neck in front of Chamberlain Bridge in a new course record time of 55.45 seconds. It was just a nose back to Central City third.
Full results chart 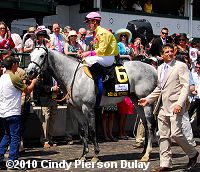 Silver Timber in the winner's circle. His owner Michael Dubb said, "He's the best, his trainer (Chad Brown) is the best and Julien (Leparoux) is the best. I'm just a passenger along for the ride. We are aware of that (course record) and we’re not surprised. He won at Keeneland last time out and was only about 80 percent. He is just now fully cranked. We claimed him hoping he would be a useful New York state-bred, but he's far exceeded expectations. You have to give Chad a lot of credit. His horses come first. He could have been here and got all the glory, but he stayed in New York with his horses. Right now as we speak he's setting up his Saratoga operation."

The $150,000 Alysheba Stakes (G3) featured older horses going 1 1/16 miles on the main track, including several who contested the Kentucky Derby last year. 6-1 Friesan Fire went to the early lead through fractions of 24.86 and 48.95 while being stalked by 16-1 Enriched. On the far turn, Friesan Fire tired allowing Enriched to take a short lead, however 4-1 second choice Arson Squad, who was 4th early, came through on the outside to take the lead at the 3/16 then drew off late to win by 2 1/4 lengths over late-running 12-1 Flying Private in 1:43.28. It was another 1 1/2 lengths back to Enriched third, while 3-1 favorite Cool Coal Man was sixth.
Full results chart 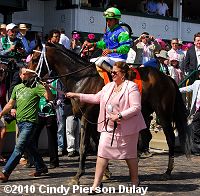 Arson Squad in the winner's circle. His trainer Richard Dutrow Jr. said, "This jock (Paco Lopez) must get along great with this horse because he used to race way out of it. I don't know if it's the jock or the horse, but it's great. I told the Siegels that we'd keep him here if he ran well today. He gets along with this track and ran great (in the Stephen Foster) last year." 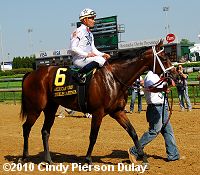 Doubles Partner before heading to the winner's circle. His jockey Garrett Gomez said, "I had a perfect trip, I really did. I was able to follow two horses that were following the leaders. I just followed behind them for the first 3/8 of a mile. I got to the second turn and I was actually going to move out around them. Just as I started to commit myself to go around them (Saint Eligius) started getting out real bad and left me enough room to drive my truck through. I slid up the fence after the leaders cleared out. You couldn’t have written a better script on how to ride both fences around the turns and be able to get out. It was a very nice trip and this was a good day to have it on.”