2019 Oaklawn Racing Festival of the South

The co-feature on Arkansas Derby day, the $750,000 Oaklawn Handicap (G2), featured a field of 9 older horses going 1 1/8 miles on the main track. Steady rain fell during the card downgrading the track to sloppy with temperatures in the mid 50's for the approximately 45,000 fans in attendance. Tenfold was sent off as the 2-1 favorite off a close 4th in an allowance last out after finishing 7th in last year's Travers (G1). In to challenge him included 3-1 second choice Giant Expectations, 5th in the Breeders' Cup Dirt Mile (G1) before finishing 3rd in the San Pasqual (G2) and Essex Handicap, and 11-2 third choice Quip, 3rd in the Hal's Hope (G3).

Jockey Luis Saez sent 10-1 Pioneer Spirit to the lead first time by through fractions of 23.65, 47.96, and 1:11.99 while pressed by 34-1 Remembering Rita and stalked by 12-1 Chris and Dave. On the far turn, jockey Jose Ortiz moved Quip 3 wide for room as he swept to the front through 1 mile in 1:37.46. 8-1 fourth choice Lone Sailor, 7th early under Flavien Prat, put in a strong 6 wide rally but Quip held him of late to win by a neck in 1:50.21. It was another neck back to pacesetter Pioneer Spirit third, while favorite Tenfold raced 6 lengths off the pace in 6th early and failed to rally, finishing 7th beaten 6 3/4 lengths.

Also check out Omaha Beach winning the Arkansas Derby and Lady Apple winning the Fantasy Stakes during the Racing Festival of the South at Oaklawn. 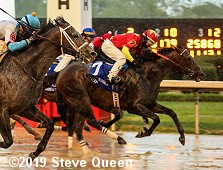 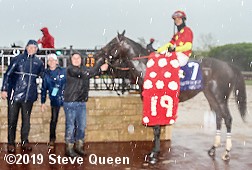 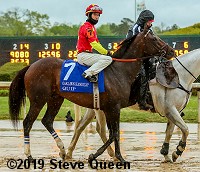 Left: Quip in the winner's circle. Winning trainer Rodolphe Brisset said, "We were expecting to be close. He looked like on the backside, the horse was not really taking us anywhere, but he was keeping position. He had to make an early move and was very wide on the turn, but the horse ran his usual race. He's been taking us on a fun ride. It's very sweet. This horse is special. I had no idea (if Quip won). Lone Sailor made his usual run. He came running at the end. I'm sure it was a short nose."

Right: Quip in the post parade. Winning jockey Jose Ortiz said, "He broke really clean. He put in a good position early, but I had to fight with Joel Rosario (on Giant Expectations) to keep I got a lucky I had the horse. Last time, they went really fast off the layoff. Quip was very game and never let them by him." 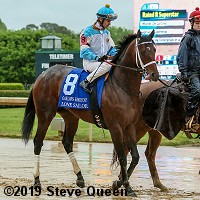 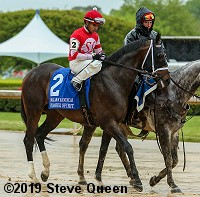 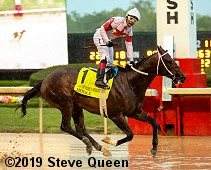 Three hours before the Oaklawn Handicap was the $500,000 Count Fleet Sprint Handicap (G3). A compact field of 5 older horses sprinted 6 furlongs around one turn of the historic Hot Springs oval, with Mitole sent off as the 2-5 favorite off a 4 race win streak including an allowance last out. In to challenge him included 8-5 second choice and last year's winner Whitmore, 2nd in the Breeders' Cup Sprint (G1) before winning the Hot Springs Stakes, and 16-1 third choice Bourbon Cowboy, an allowance winner last out.

Jockey Ricardo Santana Jr. sent Mitole to the lead exiting the chute and he set fractions of 22.49 and 45.54 while pressed by Whitmore and stalked by Bourbon Cowbow and 22-1 longest shot Storm Advisory. Turning for home Mitole continued to lead through 5f in 57.33, then drew off late to win bu 2 3/4 lengths over Whitmore in 1:09.36. It was a long 7 lengths back to Bourbon Cowboy third. 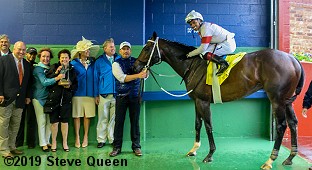 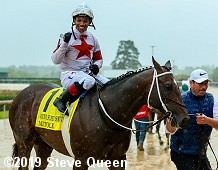 Left: Mitole in the winner's circle. Winning trainer Steve Asmussen said, "To win his first graded stakes is special. He's an elite caliber horse. He handles the wet track extremely well. He won the Chick Lang under similar conditions. He broke well and was fast to the wire. Very grateful to have him in our barn."

Right: Mitole returns after the race. Winning owner Bill Heiligbrodt said, "He's a special horse. I don't think we've seen the bottom of him yet. I don't think we saw it today. He's out of an Indian Charlie mare, and I think that's where he gets a lot of his speed." Jockey Ricardo Santana added, "Since he was a young horse, I felt like he had a lot of talent. Today, he proved it a lot." 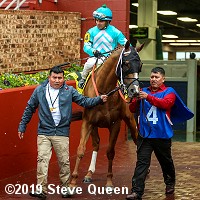 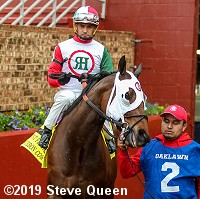