2012 Oaklawn Racing Festival of the South

On closing day of the Oaklawn meet, there are two graded stakes for the older horses. The $400,000 Oaklawn Handicap (G2) featured a field of 8 going 1 1/8 miles on the main track, with Santa Anita Handicap (G1) winner Ron the Greek sent off as the 5-2 favorite. In to challenge him included 3-1 second choice and Donn Handicap (G1) winner Hymn Book, 7-2 third choice Alternation, winner of both the Essex Handicap and the Razorback Handicap (G3), the major local preps for this event.

Jockey Luis Quinonez sent Alternation to the front first time past the stands and he set fractions of 23.91, 48.30, and 1:12.59 over the fast track while stalked by 10-1 Yawanna Twist a length behind. Entering the stretch, 60-1 longest shot Stachys issued a mild challenge, moving to within 1/2 a length of Alternation at the 1/8 pole through 1 mile in 1:37.47, but Alternation turned him away easily, drawing off to win by 2 1/2 lengths over late-running favorite Ron the Greek in 1:49.94. It was another 1/2 length back to Yawanna Twist third.

Also check out Bodemeister winning the Arkansas Derby and Plum Pretty winning the Apple Blossom during the Racing Festival of the South at Oaklawn. 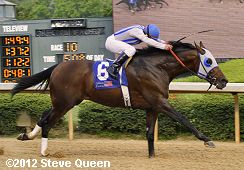 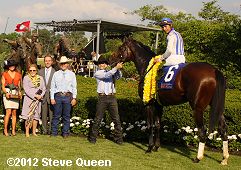 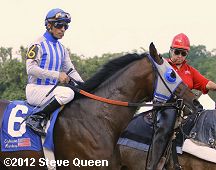 Left: Alternation in the winner's circle. Trainer Donnie Von Hemel said, "I don't think you can measure how satisfying this is. It's a race that I've been second in, hit the board in and it was always an out-of-town horse that won it. To have a horse, that got the job done is all because of Pin Oak and their breeding program. We knew this was a crossroads race for him. Now, we know we can look at races like the Pimlico Special, the Stephen Foster or maybe something in New York."

Right: Alternation in the post parade. Jockey Luis Quinonez said, "We had a dream trip. He did everything I asked him to. Donnie and his team had him ready and have done a great job with him. What the horse did today was awesome and he has been awesome every race this year. I couldn't be more proud. I want to thank the owners. He is my big horse and I couldn't be prouder." 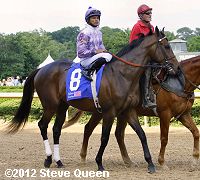 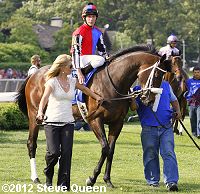 Left: Second place finisher and beaten favorite Ron the Greek in the post parade. Rudolph Basset, assistant to trainer Bill Mott said, "I think we can be very happy with this effort. We were a little wide in the first turn but the horse did a great job, he came running. If the winner went a little faster up front we would have won the race. I think we can be proud of the horse and we're very, very happy. We've got a good season coming up down the road. The year is long. He'll ship back to Lexington and ride from there to New York on Monday."

Right: Third place finisher Yawanna Twist in the paddock. The 10-1 shot stalked the pace in second under jockey Mike Luzzi, but could not improve late finishing third beaten 3 lengths. The John Parisella trainee improved his record to 5 wins, 3 seconds, and 2 third in 12 starts, earning $522,467 for owner-breeder Steel Your Face Stables. 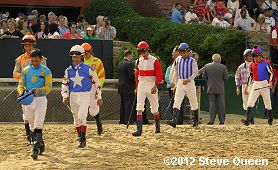 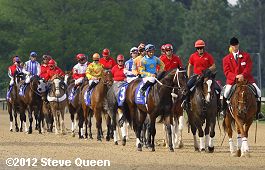 Kicking off the stakes action on closing day was the $250,000 Count Fleet Handicap (G3) for older horses sprinting 6 furlongs. Las Flores Stakes (G3) winner Izzy Rules was sent off as the 9-10 favorite in the field of 6 over 2-1 second choice Apriority, second in an allowance last out after finishing 7th in the Sunshine Millions Sprint, and 4-1 third choice Outta Tune, winner of an allowance last out.

Jockey Edwin Maldonado sent Izzy Rules to the lead down the backstretch through fractions of 22.11 and 45.12 while stalked by Outta Tune to his outside. Into the stretch, Izzy Rules tired allowing Outta Tune to inherit the lead through 5/8 in 57.20. Appriority, last early, closed well but Outta Tune held him off by 1/2 a length to get the win in 1:09.35. It was just a neck back to 6-1 Hamazing Destiny third, while favorite Izzy Rules checked in 5th. 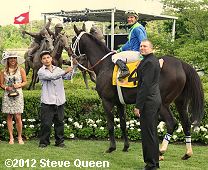 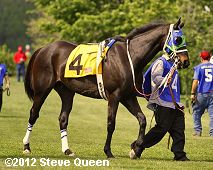 Left: Outta Tune in the winner's circle. Trainer Chris Richard said, "I thought he had a good chance, but what he showed today was unexpected. We went through a lot to get where we are today. We knew he was a nice horse at three and four. He deserves all the credit today."

Right: Outta Tune in the paddock before the race. 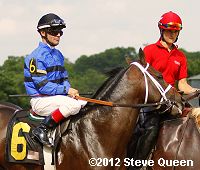 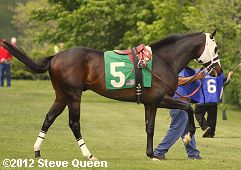 Left: Second place finisher Apriority in the paddock. The 2-1 second choice closed from last to get second beaten 1/2 a length under jockey Rafael Bejarano. The David Fawkes trainee improved his record to 5 wins, 8 seconds, and 1 third in 20 starts, earning $437,377 for owner-breeder Donald Dizney.