There are three other graded stakes races on Woodbine Mile day. Kicking off the turf stakes action on Sunday was the $300,000 HPIBet Northern Dancer Turf Stakes (G1) for older horses going 1 1/2 miles, one complete lap of the E.P. Taylor Turf Course as the major local prep for the Pattison Canadian International (G1) on October 19. A field of 9 went to post with American St. Leger (G3) winner Lucky Speed sent off as the 8-5 favorite over 5-2 Danish Dynaformer, winner of the Breeders' Stakes and Plate Trial, and 5-1 Triple Threat, 11th in the Arlington Million (G1) after winning the Monmouth Stakes (G2).

Jockey Patrick Husbands sent Danish Dynaformer to the lead on the clubhouse turn and he set easily early fractions of 26.13,. 52.28, 1:17.90, and 1:43.18 while pressedby 10-1 Interpol and stalked by 12-1 Aldous Snow. At the top of the lane, Interpol poked his head in front getting 10f in 2:08.08. As Danish Dynaformer tired, Interpol gained a 1 length lead at the 1/8 pole, and under confident handling by Emma-Jayne Wilson, he held off the late-running 17-1 Habibi by 1/2 a length in 2:33.56 over the course officially rated yielding. It was a long 3 1/4 lengths back to Triple Threat third, and a head back to favorite Lucky Speed fourth. 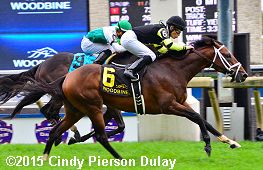 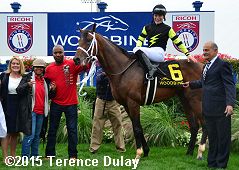 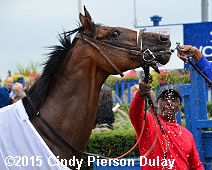 Left: Interpol in the winner's circle. Winning trainer Sid Attard said, “Not really (confident). Like today, it was soft grass, it was a tougher race so I said we’ll hope for the best. I said to Emma-Jayne, ‘What can I tell you? I didn’t tell you nothing last time. I am going to tell you nothing. The only thing I am going to say (is) it is going to be closer today.’ ‘Don’t worry about nothing,’ she said. She rode him perfect.”

Right: Interpol gets a drink of water after the race. Attard added, “He likes a month off, gallop him a couple of weeks, you work him. He likes to work a week apart. He’s been feeling really good. He’s been eating good. He’s been a fantastic horse.” 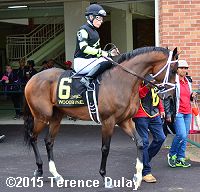 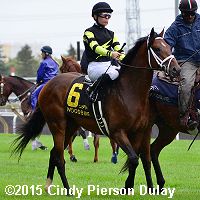 Left: Interpol heads out of the indoor paddock. Winning jockey Emma-Jayne Wilson said, “I was comfortable with my position throughout the race. Sid said earlier this morning with us going 1 1/2 we would probably be sitting a little closer. I wasn’t sure about the pace make-up. I was happy if I was going to lead him along. I knew as we turned for home if I could get a head in front like last time he’d be real tough. Very few horses can keep their head in front for the entire length of the stretch, but he seems to enjoy it and wants to be there so I just let him run his race.”

Right: Interpol behind the starting gate. 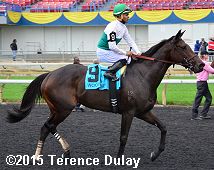 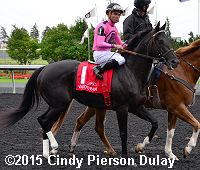 Left: Second place finisher Habibi returns after the race. The 17-1 shot raced 8th or 9th about 6 lengths off the pace under Luis Saez, then rallied late but just missed. The Mark Frostad trainee improved her record to 7 wins, 2 seconds, and 3 thirds in 16 starts, earning $680,908 for owner Augustin Stable. 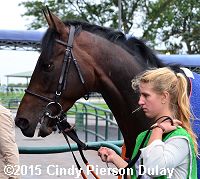 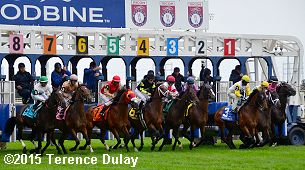 Left: Fourth place finisher and beaten favorite Lucky Speed in the paddock before the race. The 8-5 choice raced 7th about 4 lengths off the pace under Andrasch Starke, then passed tired horses to finish a head short of third. The Peter Schiergen trainee has a record of 4 wins, 1 second, and 2 thirds in 11 starts, earning $710,943 for owner-breeder Gestut Ittingen. 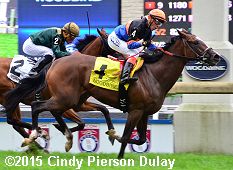 Immediately before the Woodbine Mile, the $300,000 Canadian Stakes (G2) featured a field of 10 older fillies and mares going about 1 1/8 miles around 1 turn of the turf, and is a "Win and You're In" event for the Breeders' Cup Filly and Mare Turf. Santa Ana (G2) winner Hoop of Colour was the 5-2 favorite over 7-2 Strut the Course, winner of the Dance Smartly (G2), and 11-2 Ticking Katie, 4th in the De la Rose. 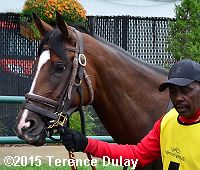 Left: Strut the Course in the winner's circle. Winning trainer Barb Minshall said, “I have to talk to (owner John Unger about the Breeders’ Cup). I am not sure. The E.P. Taylor looks pretty tempting here, but we’ll talk about it. It has just been awesome. This filly has been so good from the get-go and John has been so great, letting me put her where we want to run her and give her the time we need. It’s just been great. She was coming into this race in awesome shape.”

Right: Strut the Course heads into the paddock before the race. Winning jockey Luis Contreras said, “I had a really nice trip. She broke really good. She settled really nice behind horses. At the head of the stretch I saw the opening on the inside and I went through and she responded really well for me. “ 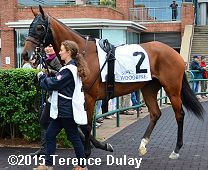 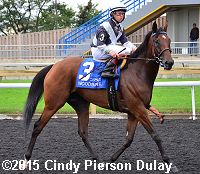 Left: Second place finisher Button Down in the paddock before the race. The 15-2 fifth choice raced 4th about 3 lengths off the pace under Joel Rosario, then rallied well but missed by 1/2 a length. The Josie Carroll trainee improved her record to 2 wins, 6 seconds, and 0 thirds in 12 starts, earning $122,966 for owner Greenwood Lodge Farm.

Right: Third place finisher and beaten favorite Hoop of Colour returns after the race. The 5-2 favorite raced 5th about 3 lengths off the pace under Drayden Van Dyke, then rallied to finish third beaten a length. The Graham Motion trainee improved her record to 4 wins, 1 second, and 1 third in 7 starts, earning $196,368 for owner-breeder Flaxman Holdings. 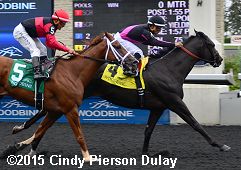 Kicking off the stakes action for the day, the $150,000 Bold Venture Stakes (G3) featured a field of 4 older horses (after 2 scratches) sprinting 6 1/2 furlongs on the Polytrack. Achievement Stakes winner Calgary Cat was the 7-10 favorite over 2-1 Essence Hit Man, the 2011 and 2012 champion sprinter in Canada, 7-2 Stacked Deck, 6th in the Play the King, and 12-1 Puntrooskie, fifth in the Ontario Jockey Club. 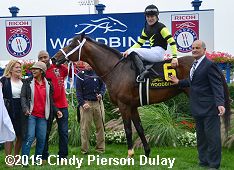 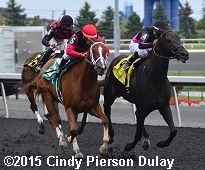 Left: Stacked Deck in the winner's circle. Winning owner Bruce Lunsford said, “Usually we have a close finish with a lot of issues, but it worked out alright. I think he is just a phenomenal talent. I think he is going to get better and better. Luis (Saez) rode it just like Barbara (Minshall, trainer) laid it out for him. He didn’t let him get caught in a speed duel and in the end, he had something left, which usually Calgary Cat just runs over people. This is a big win. His half-brother is a War Front that is going to be at Keeneland (Yearling Sale) tomorrow so I am going from here to there so maybe he added a couple of bucks to the sale.”

Right: Down the stretch in the Bold Venture. There was a stewards' inquiry and jockey's objection after Stacked Deck, on the lead with Luis Saez aboard, came out and bumped late-running favorite Calgary Cat and jockey Eurico Rosa da Silva, but the result was allowed to stand.