There are two other graded stakes races on Woodbine Mile day. Kicking off the stakes trio on Sunday was the $300,000 Northern Dancer Turf Stakes (G1) for older horses going 1 1/2 miles, one complete lap of the E.P. Taylor Turf Course as the major local prep for the Pattison Canadian International (G1) on October 19. A field of 9 went to post with The Pizza Man sent off as the 6-5 favorite off a 5 race winning streak including the American St. Leger at Arlington. In to challenge him included 3-1 second choice Sheikhzayedroad and 6-1 third choice Karibu Gardens.

42-1 longest shot and last year's winner Forte Dei Marmi was quickest away through an opening quarter in 26.52 before 11-1 Reporting Star took over the lead down the backstretch. He set slow fractions of 52.00, 1:17.88, and 1:43.18 over the good-to-firm (GoingStick 9.9) course, while stalked by Forte Dei Marmi and The Pizza Man. Entering the stretch, Reporting Star continued to lead, getting 1 1/4 miles in 2:07.61. However, Sheikhzayedroad, 7th early, and 24-1 Dynamic Sky, 8th early, came through late with Sheikhzayedroad outfinishng Dynamic Sky by 1/2 a length in 2:32.37. It was another 3/4 length back to pacesetter Reporting Star third, while favorite The Pizza Man faded to 5th. Justin Stein aboard Reporting Star claimed foul against Martin Lane aboard Sheikhzayedroad but the claim was disallowed by the stewards after a lengthy review. 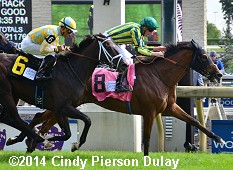 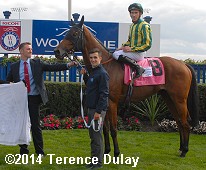 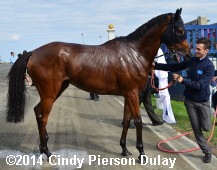 Left: Sheikhzayedroad in the winner's circle. Winning trainer David Simcock, who would later win the Woodbine Mile with Trade Storm said, "He is a grand horse and tries really hard. He has his quirks. He runs about a bit, but that's normal for him. He did a lot worse when he was a younger horse, I assure you, and he never wins by far. He thinks he's done enough once he's got there. He loves going to different places, Dubai, here and he'll go elsewhere in the future. We've got an option of the (Canadian) International on the 19th (of October). He's got an entry the same day at Ascot. I'll speak to his owner and decide where he is going. We'll either come back here or go to Ascot and then he'll go to Dubai and start his travels again."

Right: Sheikhzayedroad heads back to the barn after the race. 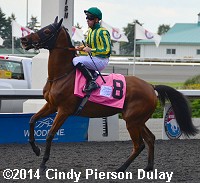 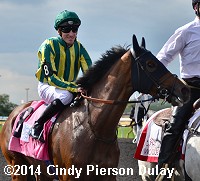 Right: Sheikhzayedroad returns after the race. Winning jockey Martin Lane said, "The race couldn't have worked out any better. He was able to come around the reins-side all the way and when we straightened up he picked up all the way to the line for me. He's gone to win real easy. He's probably got a length up. The wire is a little more daunting than it is back home and he just had a look at it and slowed down himself. It cost him more than anything." 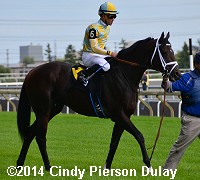 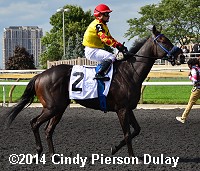 Left: Second place finisher Dynamic Sky behind the starting gate. The 24-1 shot raced 7th early under Joel Rosario then rallied to get second beaten 1/2 a length. The Mark Casse trainee improved his record to 4 wins, 4 seconds, and 4 thirds in 18 starts, earning $682,417 for owner John Oxley.

Right: Third place finisher Reporting Star returns after the race. The 11-1 shot set the pace under Justin Stein but was unable to hold off the first two, beaten 1 1/4 lengths in third. The Pat Parente trainee improved his record to 4 wins, 4 seconds, and 7 thirds in 17 starts, earning $349,303 for owner Copper Water Thoroughbred Company. 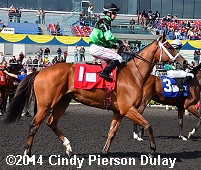 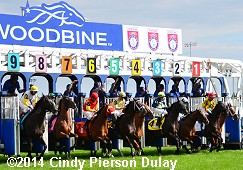 Left: Fifth place finisher and beaten favorite The Pizza Man returns after the race. The 6-5 choice stalked the pace in 3rd under regular rider Florent Geroux but tired late to finish 5th beaten 6 1/2 lengths. The Roger Brueggermann trainee improved his record to 12 wins, 1 second, and 1 third in 18 starts, earning $735,612 for owner-breeder Midwest Thoroughbreds. 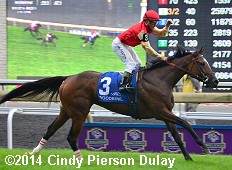 The $300,000 Canadian Stakes (G2) featured a field of 10 older fillies and mares going about 1 1/8 miles around 1 turn of the turf, and is a "Win and You're In" event for the Breeders' Cup Filly and Mare Turf. Woodbine Oaks, Queen's Plate, and Wonder Where Stakes winner Lexie Lou was sent off as the 3-2 favorite in her first race against older company. In to chalenge her included 3-1 second choice Solid Appeal, 5th in the Diana (G1) at Saratoga, and 9-2 third choice Deceptive Vision, second in the Dance Smartly (G2).

Jockey Joel Rosario sent 5-1 fourth choice La Tia to the lead exiting the chute and she set fractions of 23.68 and 47.21 while stalked by Lexie Lou and 71-1 longest shot Skylander Girl. On the turn Lexie Lou tired and faded as La Tia continued to lead to top of the stretch. Deceptive Vision, 5th early, came through to take the lead at the 3/16 pole and drew off to win by 2 1/2 lengths over late-running 22-1 Royal Fury in 1:47.80. It was another 1 3/4 lengths back to pacesetter La Tia third, while Lexie Lou finished last. 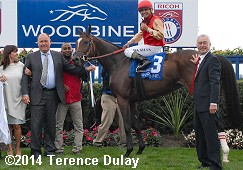 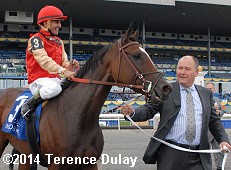 Left: Deceptive Vision in the winner's circle with trainer Malcolm Pierce at his hip. Pierce said, "We always thought she was a good filly and she settled inside the speed today, which is the key to her. Last time she led all the way and just got caught at the wire, but today she ran a great race. We spent a long time getting this filly to settle and getting her off the lead because her last two races she has been kind of headstrong and it's hard to win these kind of races on the lead all the way."

Right: Owner Rick Balaz leads Deceptive Vision to the winner's circle. Balaz said, "We haven't talked about (Breeders' Cup) because we try to not think that far down the road. We are a little bit suspicious that way. But, obviously, that's something that we definitely are going to be considering. That's why we are here, right? We breed to race and that's what we want to do so I would think so, but we'll have our discussions." 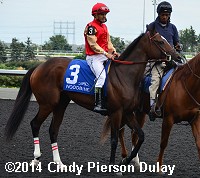 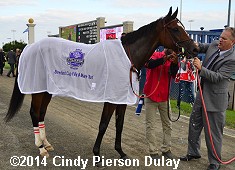 Left: Deceptive Vision in the post parade. Jockey Eurico Rosa da Silva said, "Malcolm asked me to just hide her, to put her behind horses and she is going to relax for you. He was very, very confident. I put her behind and I wanted to stay behind as long as possible. When I came home she was running relaxed and when I asked her she just kicked from there."

Right: Deceptive Vision gets a drink after the race. 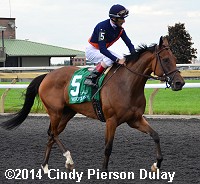 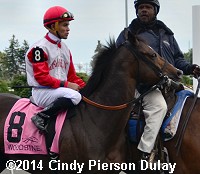 Right: Third place finisher La Tia in the post parade. The 5-1 fourth choice set the pace under Joel Rosario then tired in the stretch to finish third beatem 4 1/4 lengths. The Armando de la Cerda trainee improved her record to 8 wins, 1 second, and 5 thirds in 21 starts, earning $683,326 for owner-breeder Salvador Hernandez. 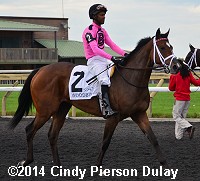 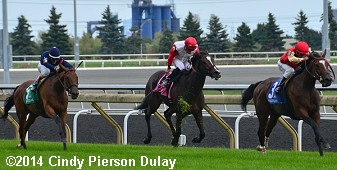 Left: Last place finisher and beaten favorite Lexie Lou returns after the race. The 3-2 choice stalked the pace under Patrick Husbands but came up empty on the turn to finish last beaten 24 1/4 lengths. The Mark Casse trainee has a record of 6 wins, 2 seconds, and 2 thirds in 14 starts, earning $1,309,714 for owner Gary Barber.

Right: Down the stretch in the Canadian Stakes.