There are two other graded stakes races on Woodbine Mile day. The co-feature on Sunday was the $500,000 Northern Dancer Turf Stakes (G1) for older horses going 1 1/2 miles, one complete lap of the E.P. Taylor Turf Course. This event is the major local prep for the Pattison Canadian International (G1) on October 16, which is Woodbine's "Win and You're In" race for the Breeders' Cup Turf. A field of 8 went to post with Wigmore Hall sent off as the 7-5 favorite, fourth in the Arlington Million (G1) last out but winless since the Jebel Hatta (G2) in Dubai in March. In to challenge him included 3-1 second choice Bourbon Bay, second in the Del Mar Handicap (G2) after winning the Cougar II Handicap (G3) both at Del Mar, and 7-2 third choice Al Khali, third in the Sword Dancer Invitational (G1) at Saratoga last out. 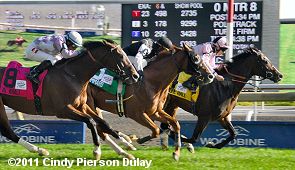 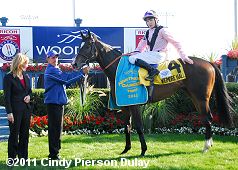 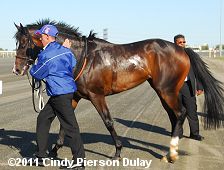 Left: Wigmore Hall in the winner's circle. His jockey Jamie Spencer said, "He's very brave. It was a slow pace and an extremely messy race. I was a bit worried but he's got a good turn of foot. I had to be ballsy, going (inside), and luckily, I got the room. I'm just delighted for the connections. He's finally won a Group 1.”

Right: Wigmore Hall heads back to the barn. 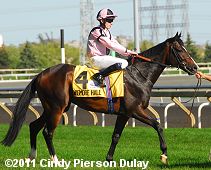 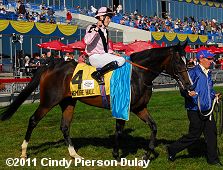 Left: Wigmore Hall behind the starting gate. Gillian Dolman, assistant to trainer Michael Bell said, "The boss (Bell) gave him all the instructions. Jamie knows this horse inside out. I'm glad he did find the rail." Asked about the inside trip, Spencer added, "I had no choice."

Right: Wigmore Hall parades for the fans after the race. 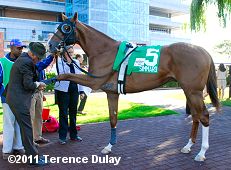 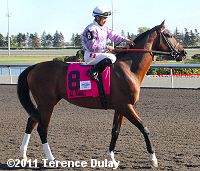 Left: Second place finisher Simmard gets saddled by trainer Roger Attfield. The 5-1 fourth choice sat seventh early under regular rider Patrick Husbands, took over the lead at the 1/2 mile pole, but could not contain the winner late. He improved his record to 5 wins, 3 seconds, and 2 thirds in 25 starts, earning $387,785 for owner-trainer Roger Attfield and co-owner William Werner.

Right: Third place finisher Al Khali in the post parade. The 7-2 third choice was last 7 lengths off the pace under regular rider Alan Garcia, came out for room at the top of the stretch and closed to get third beaten 3/4 length. The Bill Mott trainee improved his record to 6 wins, 3 seconds, and 4 thirds in 26 starts, earning $646,118 for owners Brous Stable and Wachtel Stable. 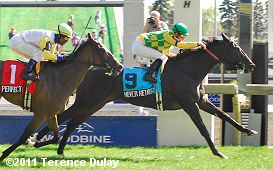 Kicking off the stakes action on Woodbine Mile day was the $300,000 Canadian Stakes (G2) for older fillies and mares. This is the major local prep for the E.P. Taylor Stakes on the Canadian International undercard, Woodbine's "Win and You're In" event for the Breeders' Cup Filly and Mare Turf. A full field of 14 went to post in this "about" 1 1/8 mile turf event around 1 turn of the turf course, with Diana Stakes (G1) winner Zagora sent off as the 3-1 favorite over 5-1 second choice Fantasia, fourth in the Beverly D (G1) last out, and 11-2 third choice Bay to Bay, third in the Diana (G1).

64-1 longshot Woolly Bear battled for the lead with 6-1 fourth choice Never Retreat through fractions of 24.10, 47.65, and 1:12.23 with 10-1 Stars to Shine stalking the lead pair in third. Entering the stretch, Woolly Bear tired badly to eventually finish last, allowing Never Retreat to inherit the lead midstretch through 1 mile in 1:35.17. 25-1 Perfect Shirl, 11th early, put in a strong late rally from 6 lengths out but Never Retreat held her off in the final 1/16 to win by 1/2 a length in 1:45.13. It was another length back to Stars to Shine third. 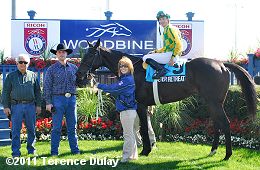 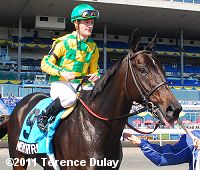 Left: Never Retreat in the winner's circle. Her jockey Julien Leparoux said, "She broke good and put me in the race nice. She relaxed beautifully for me. She got to the lead very early but she kept on going. She's a nice filly." 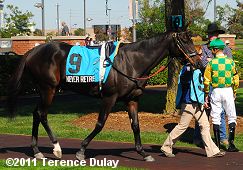 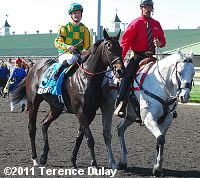 Left: Never Retreat in the paddock before the race. Drew Coontz, assistant to trainer Chris Block said, "(Leparoux) got her settled and relaxed pretty well and did a wonderful job. She loves it here. Julien said it all, 'she's a good filly'. That was one of the decisions for bringing her back here (winning the Dance Smartly)." 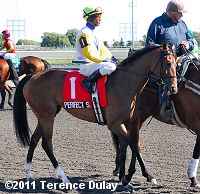 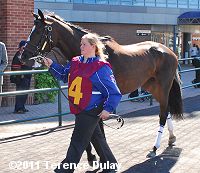 Left: Second place finisher Perfect Shirl in the post parade. The 25-1 shot settled back in 11th 6 lengths off the pace under new jockey Patrick Husbands, came through between horses late and just missed. The Roger Attfield trainee improved her record to 3 wins, 2 seconds, and 5 thirds in 14 starts, earning $310,729 for owner-breeder Charles Fipke.

Right: Third place finisher Stars to Shine heads into the paddock before the race. The 10-1 shot stalked the pace in third under new jockey William Buick, finished all out but could not improve position, finishing third beaten 1 1/2 lengths. The Mark Frostad trainee improved her record to 4 wins, 1 second, and 2 thirds in 9 starts, earning $226,545 for owner The Grange House Partnership.