The feature race on closing day at Del Mar was the $300,000 Matriarch Stakes (G1) for older fillies and mares going 1 mile on the Jimmy Durante turf course. Conditions were typical for late November at the seaside oval, with sunny skies and temperatures in the high 60's, the main track rated fast and the turf going firm. Tamahere was sent off as the 2-1 favorite in the field of 8 off her win in the Sands Point (G2) at Belmont. In to challenge her included 3-1 second choice Sharing, winner of the Edgewood (G2) at Churchill after finishing second in the Coronation (G1) at Royal Ascot, and 9-2 third choice Blowout, second in the Noble Damsel (G3).

Blowout and 6-1 Juliet Foxtrot dueled for the lead through fractions of 22.62, 45.63, and 1:09.37 while stalked by Sharing and 27-1 She's Our Charm. Turning for home Juliet Foxtrot took over through 7f in 1:21.33 but 5-1 fourth choice Viadera, 5th early under Joel Rosario, came out for room and outfinshed Blowout to win by a nose in a stakes record 1:33.03. It was another 1/2 length back to Juliet Foxtrot third, while favorite Tamahere sat 7th early and passed one horse to finish 6th beaten 2 1/2 lengths. 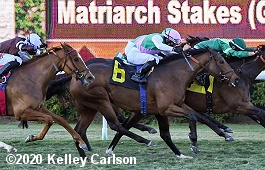 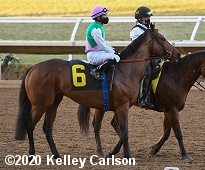 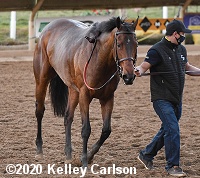 Left: Viadera in the post parade. Jose Hernandez, assistant to winning trainer Chad Brown said, "This weekend has been amazing. I didn't know which filly (of the stablemates) was the winner, but I'm happy it turned out to be Viadera. My boss Chad Brown is an amazing trainer and I just do my best for him. It's an amazing job for me and I love the horses. In the future, I don't know when it would be, if Chad wanted to come out here with a string, I'd like that. We like it out here."

Right: Viadera heads back to the barn after the race. Winning jockey Joel Rosario said, "Whew. I had to work for that one. She's a good filly, a really good filly. But she makes you work. I had to stay after her. She can run, though, there's no doubt. I'm lucky that Chad Brown gives me an opportunity like this. Grass horses and especially fillies. He's the best." 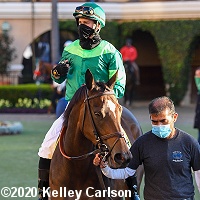 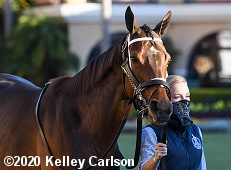 Left: Second place finisher Blowout in the paddock before the race. The Chad Brown trainee improved her record to 3 wins, 7 seconds, and 1 third in 11 starts, earning $411,700 for owner Peter Brant. 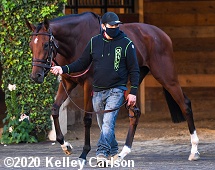 Sixth place finisher and beaten favorite Tamahere in the paddock. The Chad Brown trainee has a record of 3 wins, 2 seconds, and 1 third in 8 starts, earning $132,791 for owners Swift Thoroughbreds, Madaket Stables, and Wonder Stables. 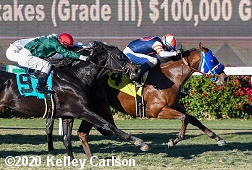 Jockey Mario Gutierrez sent 16-1 Commander Khai to the lead first time by through fractions of 22.53, 46.84, and 1:11.48 while pressed by 82-1 longest shot Coastal Kid and staked by 20-1 Beer Can Man. Into the lane Commander Khai opened up a 2 length advantage through 7f in 1:23.13 but Beer Can Man, moved out for room by Juan Hernandez, rallied to win by 1/2 a length over deep closing 6-1 fourth choice Caisson in 1:34.75. It was another length back to Commander Khai third, while favorite Royal Prince was 5th early but failed to close finishing 7th beaten 2 3/4 lengths.
Full results chart from DRF 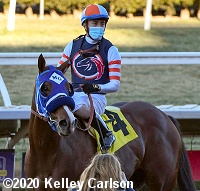 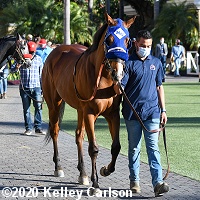 Left: Beer Can Man in the winner's circle. Winning trainer Mark Glatt said, "We've had him about six weeks. We entered him the first weekend of the meeting, thinking we could run then and then come back in this race. But that race didn't go. So (the owners) told me to get him ready to go a mile. I was a little skeptical to be honest, but the horse relaxed great, Juan put a nice ride on him and he got the money."

Right: Beer Can Man in the paddock. Winning jockey Juan Hernandez said, "One jump out of there he came (back) to me. He settled real well. I just found me spot tracking the leaders and I was happy. At the quarter pole I asked him to go and he did. He really fired. He didn't want to let horses go past him, either. He's a nice horse." 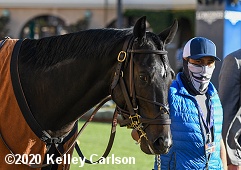 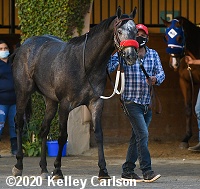 Left: Second place finisher Caisson in the paddock before the race. The Richard Mandella trainee improved his record to 1 win, 1 second, and 0 thirds in 4 starts, earning $62,000 for owner Sarah Kelly. 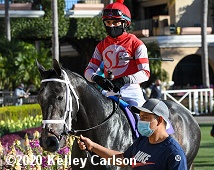 Seventh place finisher and beaten favorite Royal Prince in the paddock. The Brad Cox trainee has a record of 1 win, 1 second, and 0 thirds in 3 starts, earning $51,100 for owner Steve Landers Racing.