The day after Christmas marks opening day for the Santa Anita winter-spring meeting. Conditions were excellent in Arcadia, California, with sunny skies and temperatures in the mid 70's, however racing continues to be conducted without spectators as Southern California is under a lockdown. Despite the lack of fans in attendance, a new record opening day handle of over $23 million was set, topping the previous record of $20.49 million on December 26, 2018. Nate Newby, Santa Anita senior VP and general manager said, "We want to thank our fans, owners, trainers, jockeys and other stakeholders for supporting our racing program and contributing to a strong opening day. This has been a difficult year for a lot of people and we are happy to be able to provide world class racing for those watching and playing the races from home. We can't wait to welcome our fans and our employees back to The Great Race Place when protocols allow everyone to enjoy our tremendous sport in person. In the meantime, we are thankful to be able to operate as we are currently."

The traditional opening day feature is the $300,000 Malibu Stakes (G1) for three-year-old sprinters going 7 furlongs. The race kicks off the Strub Series for newly-turning 4-year-olds, continuing with the San Fernando and the Strub Stakes during the meet. Nashville was sent off as the 6-5 favorite in the field of 6, undefeated in 3 starts including the Perryville Stakes at Keeneland. In to challenge him included 8-5 second choice Charlatan, also undefeated in 3 starts but unraced since winning the Arkansas Derby (G1) in May, and 9-2 third choice Independence Hall, an allowance winner after finishing 5th in the Florida Derby (G1).

Jockey Ricardo Santana Jr. sent Nashville to the lead exiting the chute through fractions of 21.81 and 43.95 while pressed by Charlatan and stalked by Independence Hall and 17-1 Express Train. Turning for home, jockey Mike Smith moved Charlatan out for room and he left the field behind, opening up a 4 length advantage through 3/4 in 1:08.54. Kept to task by Smith, Charlatan cruised the rest of the way to win by 4 1/2 lengths over Express Train in 1:21.50. It was another 1/2 length back to 10-1 Collusion Illusion third, and another 3 1/4 more to favorite and pacesetter Nashville fourth. 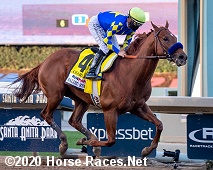 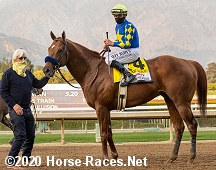 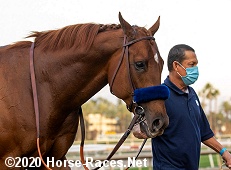 Left: Charlatan in the winner's circle. Winning trainer Bob Baffert said, "I told Mike, 'you know I can only get him so ready, I didn't want to overdo it with him, it is early in the year and all, so I'm counting on his class to get him there he's probably gonna need this race. 'You know but those really good ones like him, they just make my job a whole lot easier. You get them ready to a certain point and then he just took over himself, that was just pure pure brilliance that we witnessed today. They were rolling early, there was a really good horse he was chasing. With what this horse has been through I'm just happy for the whole team and everybody involved, to show he is a really special horse. Hopefully we will have a good year with him."

Right: Charlatan heads back to the barn. Baffert added, "I have a great team behind me and great ownerships with wonderful people. They stuck by me with all the negative stuff, you need that support. Our job is to get results that's what its all about and I'm grateful to have all these great horses and continue on. I'm still having fun. For Santa Anita it's a shame that there wasn't 30-40,000 people in the stands today, they are all next door in the mall, but its one of those things you know, we are here." 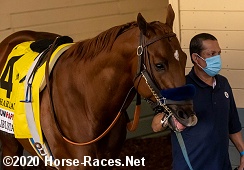 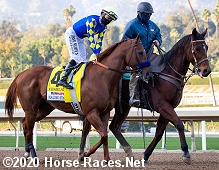 Left: Charlatan in the paddock before the race. Winning jockey Mike Smith said, "First of all my hat's off to Bob and his whole crew to get this horse ready off an eight-month layoff. To run against these types of horses was a feat itself, but I always thought he was a special horse. I've had the opportunity to watch him, California is his home base, so I've seen a lot of him and always wanted a chance to ride him. When Bob told me I got the call, man I've been kind of on cloud nine ever since. He is extremely special." 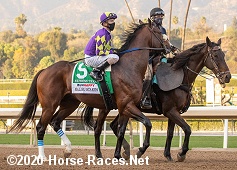 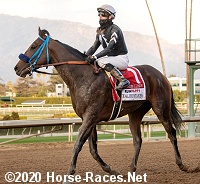 Left: Second place finisher Express Train in the post parade. Jockey Juan Hernandez said, "I expected a lot of speed in the race and there was, it was really fast. He broke pretty well. He didn't have too much speed at the start, but he was comfortable behind. When I took him outside, he was very comfortable and I had a really good position. Around the last turn I started working really hard on him and he responded well, but the winner never stopped. My horse ran well today and tried the best he could."

Right: Third place finisher Collusion Illusion returns after the race. Jockey Flavien Prat said, "That was a great effort. He doesn't like being on the rail. We settled on the back side and once we got clear, he had something left down the lane. I was really pleased in this race following what happened at the Breeders Cup." 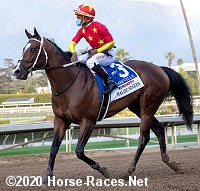 Fourth place finisher and beaten favorite Nashville returns after the race. The Steve Asmussen trainee has a record of 3 wins in 4 starts, earning $175,200 for owners CHC Inc. and WinStar Farm. 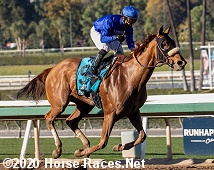 The distaff counterpart to the Malibu is the $300,000 La Brea Stakes (G1) for 3-year-old fillies also sprinting 7 furlongs. Finite was sent off as the 2-1 favorite in the field of 10 off her win in the Chilukki Stakes (G3) after finishing 2nd in the Raven Run (G2). In to challenge her included 7-2 second choice Merneith, winner of the Fort Springs, and 4-1 third choice Himiko, an allowance winner making her stakes debut.

Jockey Juan Hernandez sent 18-1 Biddy Duke to the lead exiting the chute through fractions of 21.88 and 44.59 while pressed by Merneith and stalked by 7-1 Motivated Seller and 10-1 Secret Keeper. Turning for home, 13-1 Golden Principal, 6th early under Mike Smith swept to the lead through 6f in 1:09.92 but 21-1 Fair Maiden, 7th early under Ricardo Gonzalez, came out 4 wide for room and rallied by to win by 2 1/4 lengths in 1:22.69. It was another 1 1/2 lengths back to Merneith third, and 3/4 more to late-running favorite Finite fourth. 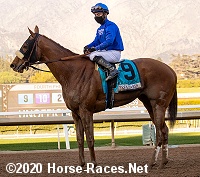 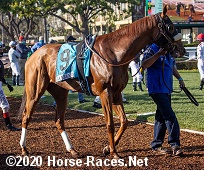 Left: Fair Maiden in the winner's circle. Winning jockey Ricardo Gonzalez, celebrating his first Grade 1 winner said, "Eoin (Harty) said she was doing really really well, to just put her in the race. There were quite a few speeds. 'Just put her in the race get her clear and get her to the outside.' We hit the stretch and as soon as we hit the stretch she went on the outside and was just full of run. I was just so happy and excited, to just ride these kinds of horses, it feels great. I'm very thankful to Eoin and all the trainers for all the opportunities."

Right: Fair Maiden in the paddock before the race. Winning trainer Eoin Harty said, "I didn't want to keep taking her up to Woodbine so I found a spot at Churchill and that was a big question mark as to whether she would handle it there and she did. She was super professional that day and gave me a lot of confidence in bringing her out here for this. I've been watching Ricky ride since he came down here, and I think he's the next superstar. He's brave and he puts his horse in a spot to win. I grab him in every time I can because I think he's a world-class rider, and today was his first Grade 1 win." 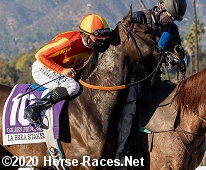 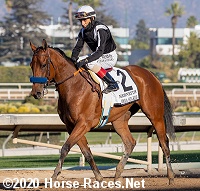 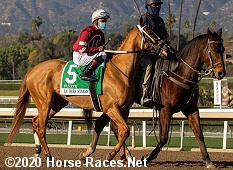 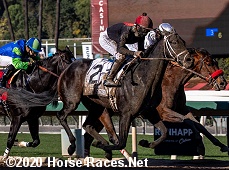 The $200,000 San Antonio Stakes (G2) featured a field of 6 older horses going 1 1/16 miles on the main track in an early prep for the Santa Anita Handicap. Pegasus World Cup Invitational (G1) winner Mucho Gusto was sent off as the 1-2 favorite off his 4th place finish in the Saudi Cup. In to challenge him included 4-1 second choice Idol, winner of 2 straight in allowance company, and 13-2 third choice Midcourt, 2nd in the Native Diver (G3) after finishing 3rd in the Awesome Again (G1) and Pacific Classic (G1).

Jockey Jose Valdivia Jr. sent 29-1 longest shot Take the One O One to the lead first time by through fractions of 23.83, 47.81, and 1:11.42 while pressed by Mucho Gusto and stalked by Idol. Entering the lane Take the One O One continued to lead through 1 mile in 1:36.83 but 16-1 Kiss Today Goodbye, last early under Mike Smith, came out 4 wide into the stretch and outfinished Idol to win by 1/2 a length in 1:43.37. It was another 3/4 length back to pacesetter Take the One O One third, and 1 1/4 more to the tiring favorite Mucho Gusto fourth. 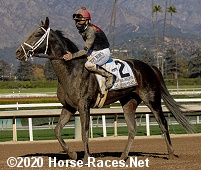 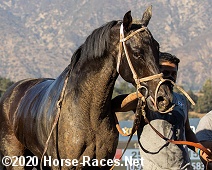 Left: Kiss Today Goodbye heads to the winner's circle. Winning trainer Eric Kruljac said, "He was always very immature early on. It just took him longer to get to where he is and I think he is really just beginning to mature. About four races back he got absolutely sandblasted and was basically eased in the race. I basically told (Mike), 'he's better with the kickback but it was a factor that day.' As you can see when Mike came back, he ate the dirt, the colt has put it all together and Mike gave him an absolutely perfect ride. The pace gods were on our side."

Right: Kiss Today Goodbye heads back to the barn. Winning jockey Mike Smith said, "I was impressed with his last race and I wasn't even riding him. He ran by me in that last race. I thank Eric Kruljac for the opportunity of riding him and for his great training job. The race was shaping up for him with the speed up front and when it came time to run, he took off. I just guided him around the track." 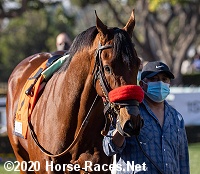 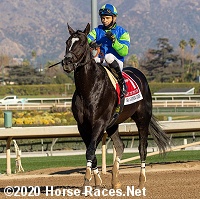 Left: Second place finisher Idol in the paddock before the race. The Richard Baltas trainee improved his record to 2 wins and 2 seconds in 4 starts, earning $152,464 for owner Calvin Nguyen.

Right: Third place finisher Take the One O One returns after the race. The Brian Koriner trainee improved his record to 6 wins, 2 seconds, and 4 thirds in 19 starts, earning $490,326 for owner Jay Em Ess Stable. 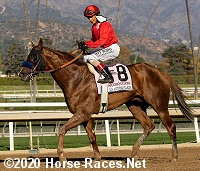