2015 "Road to the Derby" Kickoff Day at the Fair Grounds

Fair Grounds Race Course hosted its "Road to the Derby Kickoff" card on Saturday with five stakes races. Conditions were overcast with temperatures in the high 60's. The highlight of the afternoon was the $200,000 Lecomte Stakes (G3) for 3-year-olds going 1 mile 70 yards on the main track. The race is a points-scoring race in the Road to the Kentucky Derby series, the points used to determine Derby starting spots. Eagle was sent off as the lukewarm 3-1 favorite in the field of 11 off a close third in the Kentucky Jockey Club (G2). In to challenge him included 7-2 second choice Savoy Stomp, third in an allowance last out at Gulfstream, and 4-1 third choice Tiznow R J, winner of a maiden at third asking by 13 lengths.

Jockey Alexander Reznikov sent 174-1 longest shot Hero of Humor to the lead first time by through an opening quarter in 23.66 before being joined at the front by 6-1 Runhappy through a half in 47.07, while stalked by Tiznow R J. Hero of Humor regained the lead through 3/4 in 1:13.35 before tiring. 11-2 fourth choice War Story, 5th early, moved up 5 wide to gain the lead at the 3/16 pole. However, 9-1 International Star, 6th early, rallied on the outside to get to the front at the 1/16 pole through 1 mile in 1:39.48. Kept to task by Miguel Mena he drew off to win by 2 1/2 lengths over War Story in 1:43.62. It was just a head back to Tiznow R J third, while favorite Eagle was bumped soon after the start, finishng 7th.
Results Chart 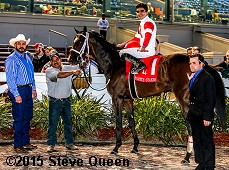 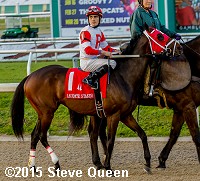 Right: International Star in the post parade. Winning jockey Miguel Mena said, "The plan was to save ground on both turns and then he came out at the 3/16 pole and came rolling. He was running hard, but he kind of pulled himself up a little at the end when he found himself alone on the lead."

The start of the Lecomte Stakes with International Star on the inside. Trainer Mike Maker said, "He's been training very well. We expected a big race - maybe not that big - but he was coming into the race great. We'll bring him back to Florida and take a hard look at the Risen Star." 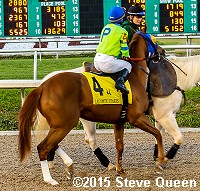 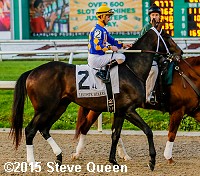 Left: Second place finisher War Story in the post parade. Jockey James Graham said, "He did what we asked him to do. We haven't got to the bottom of him yet. The trip was rough at the start - I got slammed twice, but after that he settled into the race for me."

Right: Third place finisher Tiznow R J in the post parade. The 4-1 third choice stalked the pace in second or third under Robby Albarado, but failed to get to the front finishing third beaten 2 1/2 lengths. The Steve Asmussen trainee improved his record to 1 win and 3 thirds in 4 starts, earning $50,180 for owner Mike McCarty.


The distaff counterpart to the Lecomte is the $125,000 Silverbulletday for 3-year-old fillies also going a mile and 70 yards on the main track. Top Decile was sent off as the even-money favorite in the field of 9 over 2-1 West Coast Belle and 6-1 Forever Unbridled.

Jockey Florent Geroux sent 8-1 fourth choice I'm a Chatterbox to the lead immediately and she set fractions of 23.43, 47.93, and 1:12.92 while stalked by 10-1 Divine Dawn. Entering the stretch, I'm a Chatterbox left the field in her wake, getting the mile in 1:38.81. Eased up in the final strides by Geroux, she finished 8 lengths ahead of late-running Forever Unbridled in 1:43.21. It was just a head back to 28-1 Money'soncharlotte third, while favorite Top Decile was 6th.
Results Chart 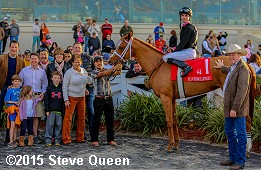 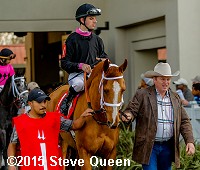 Left: I'm a Chatterbox in the winner's circle with trainer Larry Jones at her hip. Jones said, "This was our first time running her because she was coming from another barn, but I didn't have any game plan. I told Florent 'ride her like you own her and need the money really bad.'"

Right: Trainer Larry Jones leads I'm a Chatterbox heads out to the track before the race. Winning jockey Florent Geroux said, "I had her in a good spot and she was moving easily after getting to the front easy. She was going fast, but she had plenty left in the tank down the lane." 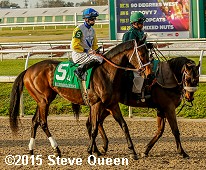 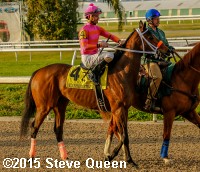 Left: Second place finisher Forver Unbridled in the post parade. Jockey Brian Hernandez Jr. said "She ran boldly; an incredible race. She is coming forward. We had a great trip outside in the clear the whole way and our filly loomed up there turning for home and ran an incredible race for it being only her third run."

Right: Third place finisher Money'soncharlotte in the post parade. The 28-1 shot stalked the pace in third under Robby Albarado but could not improve late, finishing third beaten 8 lengths. The Kelly Breen trainee improved her record to 2 wins, 0 seconds and 1 third in 4 starts, earning $104,750 for owners George and Lori Hall. 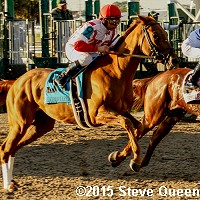 Sixth place finisher and beaten favorite Top Decile just after the start. The even-money choice raced well back early under Mike Smith and failed to rally, finishing 6th beaten 19 lengths. The Al Stall Jr. trainee has a record of 1 win, 2 seconds, and 0 thirds in 4 starts, earning $491,050 for owners Klaravich Stables and William Lawrence.


A field of 8 older horses went to post in the $125,000 Colonel E.R. Bradley Handicap (G3) at 1 1/16 miles on the turf. Villandry was sent off as the 2-1 favorite off his win in the River City (G3) at Churchill Downs.. In to challenge him included 5-2 second choice Gentleman's Kiten, 9th in the River City, and 3-1 third choice String King, winner of the Louisiana Turf last out.

Jockey Mike Smith sent Gentleman's Kitten to a clear lead first time by and he set fractions of 24.17, 48.08, and 1:12.35 over the good course while as many as 4 lengths in front of String King sitting in second. Entering the lane, String King moved up to challenge the pacesetter, taking over the lead at the 3/16 through 1 mile in 1:36.34. Kept to task by James Graham, String King finishing 1 1/4 lengths in front in 1:42.42. It was just a nose back to late-running 11-2 Highball third. Favorite Villandry checked in 6th.
Results Chart 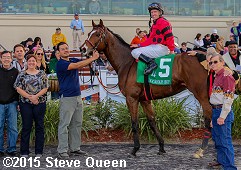 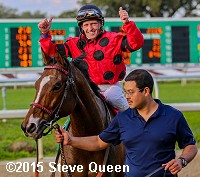 Left: String King heads to the winner's circle. Winning trainer Charlie Smith said, "This is a marvelous horse who has won stakes at 3, 4, 5, 6, and 7. Outside of winning the Kentucky Derby, winning a Grade 3 in front of the home folks is enough for me. I can tell you the strength of this horse in one word - tenacity." 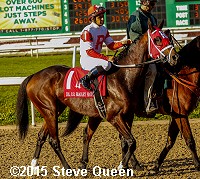 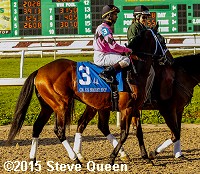 Left: Second place finisher Gentleman's Kitten in the post parade. Jockey Mike Smith said, "(The winner) had to really run to get by me. I have no excuses."

Right: Third place finisher Highball in the post parade. Jockey Shaun Bridgmohan said, "I thought he ran hard. He had to overcome the pace. He tried and ran well." 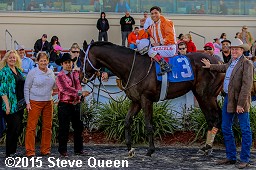 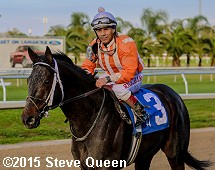 Left: Hard Aces in the winner's circle with trainer Larry Jones at his hip. Winning jockey Jose Riquelme said, "I tried to keep my horse in contention and when I asked him, he responded. I couldn't stop him so I kept him running."

Right: Hard Aces returns after the race. Winning trainer Larry Jones said, "We knew the mother (All in With Aces) was better at five. I trained her as well. The Hard Spun (progenies) are really getting good at five. He had two Grade 1 winners last year as 5-year-olds who had never been stakes horses before. We were hoping this horse was good. His last race was his best of his career and today was better than that." 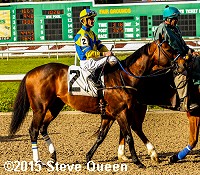 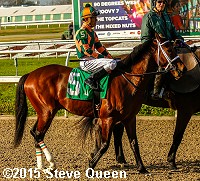 Right: Third place finisher and beaten favorite Albano in the post parade. Trainer Larry Jones said, "The race was a good tightener for Albano, he'll be back in these things soon."


The distaff counterpart to the Col. Bradley is the $60,000 Marie G. Krantz Memorial Handicap for older fillies and mares also going 1 1/16 miles on the turf. Kitten's Dumplings was sent off as the 3-2 favorite in the field of 11 over last year's winner 5-2 Eden Prairie and 9-2 Notte d'Oro. 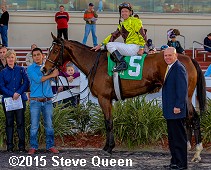 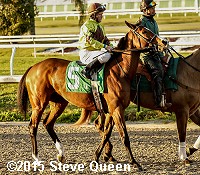 Left: Notte d'Oro in the winner's circle with trainer Mike Stidham at her hip. Stidham said, "It's really the further the better with her, a couple of those one-mile races were probably too short for her. We always thought she was going to be a nice filly."

Right: Notte d'Oro in the post parade. Winning jockey James Graham said, "She liked a little cut in the ground and just wanted to keep grinding." 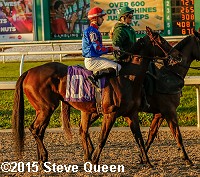 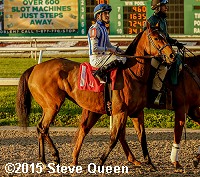