The feature race on Sunday at Santa Anita was the $100,000 Las Flores Stakes (G3), a 6 furlong main track sprint for older fillies and mares. Conditions were excellent once again with sunny skies and temperatures in the low 80's. Just four were entered, with Gamine sent off as the 1-20 favorite, making her 2021 debut after winning the Breeders' Cup Filly and Mare Sprint (G1). In to challenge her were 10-1 second choice Qahira, third in the Kalookan Queen Stakes, 32-1 third choice Biddy Duke, 4th in the Santa Monica (G2), and 44-1 longest shot Hang a Star, unraced since 7th in the Goldikova (G2) in October. Due to the short field and prohibitive favorite, there was no place nor show pool. 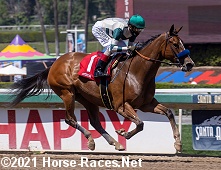 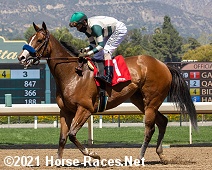 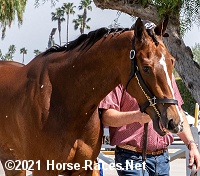 Left: Gamine returns after the race. Winning trainer Bob Baffert said, "She looked fantastic, they both (Qahira) looked fantastic in the Paddock and the only thing I was worried about was bad luck. I told (Johnny) before, 'With the one hole make sure you don't let her make the gap. Ride her like she's 10-1.' I'm happy for my owners and everybody involved. They are excited, it's Easter Sunday, so it's a big win. For her to start off here, I'm glad I got to run her. There's a lot of people who came out to watch her run."

Right: Gamine heads back to the barn. Baffert added, "They (the fans) saw one of the greatest fillies I've ever trained going one turn. Hopefully we'll stretch her out. Michael Lund, has been a great supporter of mine. I told him I was going to give her a little race but the purse isn't very big. But he was excited he said, 'I want to see her run.' So when you own one like that it's fun to see them run." 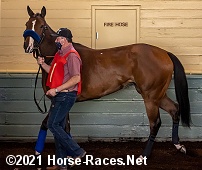 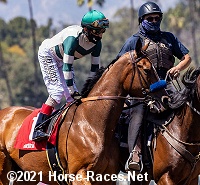 Left: Gamine in the paddock. Winning jockey John Velazquez said, "She came back so good. Bob has done a great job to bring her back after so many months on a layoff. She felt as good as last year. Bob thinks she’s not ready yet, that’s what he told me. She does everything so effortlessly, it’s just everything she does makes my job a lot easier. I just steer where I want to go and that’s it. That’s the biggest point of her strength, I believe." 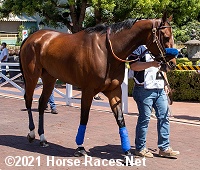 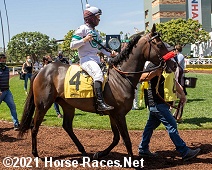 Left: Second place finisher Qahira in the walking ring before the race. The Bob Baffert trainee improved her record to 5 wins, 2 seconds, and 1 third in 10 starts, earning $249,400 for owner Baoma Corporation.