There were four graded stakes contested on the second Saturday of the Saratoga summer meeting. Conditions were excellent with partly cloudy skies and temperatures in the low 80's at the historic oval.

The $600,000 Jim Dandy Stakes (G2) is the major local prep for the Travers (G1) to be run 4 weeks later. A field of 6 three-year-olds contested this 1 1/8 mile main track test, with Fountain of Youth (G2) winner Mohaymen sent off as the 7-5 favorite off 4th place finishes in both the Florida Derby (G1) and Kentucky Derby (G1). In to challenge him included 2-1 second choice Destin, second in the Belmont (G1), and 4-1 third choice Governor Malibu, fourth in the Belmont.

Jockey Jose Ortiz sent 27-1 longest shot Laoban to the lead first time by and he set fractions of 24.56, 49.07, and 1:12.46 while pressed by Destin and stalked by Governor Malibu and Mohaymen. Entering the lane Laoban continued to lead by 1 1/2 lengths getting 1 mile in 1:36.10. Governor Malibu attempted to close but Laoban easily held him off to win by 1 1/4 length in 1:48.39.It was just a neck back to Destin third, and a long 4 1/4 lengths back to favorite Mohaymen fourth. 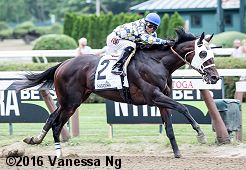 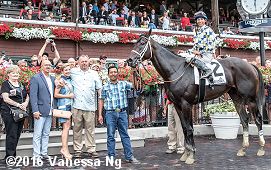 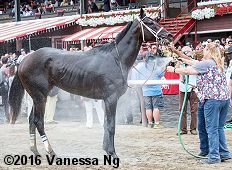 Left: Laoban in the winner's circle. Winning trainer Eric Guillot said, "I've always known the horse had talent, from Day 1. And he was very, very phsyically immature. He's a monster, he's 17-1 hands. I've been shipping him across the country the last six, seven races, and when he got to the Preakness, he really didn't like the mud, he stumbled in the gate, and didn't like it in his face. That was kind of a throw out. I freshened him up, but he was too fresh for the Dywer. Running him out of his stall [here], like in the Blue Grass, made all the difference in the world."

Right: Laoban gets hosed off after the race. Winning jockey Jose Ortiz said, "The trainer had a lot of faith in the horse. I'd never previously ridden the horse, but he broke great and they let me go easy enough. He was relaxed, pulling me a little bit with his ears prickling and when I asked him to go by the 1/4 pole he really took off. I was really confident by the 1/2 mile pole." 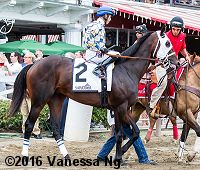 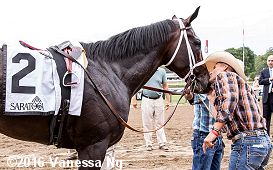 Left: Laoban heads out for the post parade. Ortiz added, "Eric told me he had been doing great all week. That he worked in :46 and that we're going to win the Travers. He's already won here with Moreno and he's been very faithful and it's true he has a very nice horse. We were coming into the turn on the gallop out, and when he switched to the right lead he stumbled and I came off. I'm okay though."

Right: Laoban gets a kiss from one of his handlers after the race. Guillot added, "I'm trying to create value with this horse. When they called me and told me it was going to be five - it wound up being six, but they told me five, and who they were - I thought, 'All the speed's across town tomorrow, in the Haskell. I'm going to take a shot.' He was doing good, worked in :46 3/5, galloped out in a minute flat, I schooled him, I'm here, he's doing great ... why not take a chance? My partner and I, we don't dance to elevator music. We dance to Zydeco. Who wants to run in a maiden?" 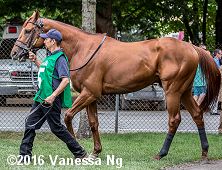 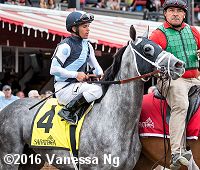 Left: Second place finisher Governor Malibu in the paddock. Jockey Joel Rosario said, "It looked like the horse on the lead would go with no pace. He was the speed and he took them all the way. My horse tried hard, he gave me everything he had. If we had gotten a little more pace it probably would have been better, but since that horse went to the lead, he controlled the race."

Right: Third place finisher Destin heads out for the post parade. Trainer Todd Pletcher said, "We got the trip we wanted. Javier said he just feels like he's still a little unfocused, just kind of eyeballing that horse in front of him and when Governor Malibu came then he dug back in. He saw the tire tracks, then he went back to his left lead, like he's still figuring it out a little bit." 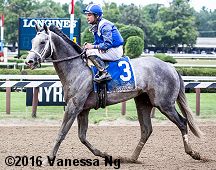 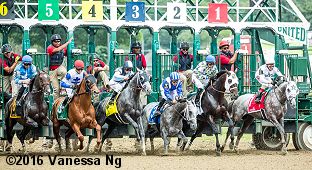 Left: Fourth place finisher and beaten favorite Mohaymen returns after the race. Trainer Kiaran McLaughlin said, "Obviously, he didn't run his race. It looked like Junior was out of horse at the half-mile pole. It's a big concern, we'll scope him and look him over. He looked like he was having to ask him way early, so we're concerned."

Right: The horses break from the gate for the Jim Dandy Stakes showing Mohaymen on his knees. Junior Alvarado aboard Mohaymen said, "He stumbled a little bit coming out of the gate, I didn't think it mattered at all. I thought coming to the turn I was in a position I wanted to be in. I was expecting Laoban in front and Destin in second. As soon as we got to the backside he switched to the right and after that he wasn't the same horse, he wasn't following the race. He was doing things I've never done with him before, not even in the Derby."


Kicking off the stakes action on Saturday was the $200,000 Amsterdam Stakes (G2) for 3-year-olds sprinting 6 1/2 furlongs on the main track. Maniacal, an allowance winner last out after breaking his maiden, was sent off as the 2-1 favorite in the field of 7. In to challenge him included 3-1 second choice Mind Your Biscuits, second in the Mike Lee Stakes, and 4-1 third choice Its All Relevant, 4th last out in an allowance at Belmont.

Jockey David Flores sent Maniacal to the lead exiting the chute through fractions of 22.36 and 45.41 while pressed by Its All Relevant and stalked by 7-1 Counterforce. Entering the lane Maniacal continued to lead through 3/4 in 1:09.19 but Mind Your Biscuits, 6th early on an inside trip, came through on the rail to win going away by 1 3/4 lengths in 1:15.25. It was another 2 1/4 lengths back to Its All Relevant third. 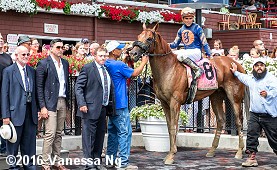 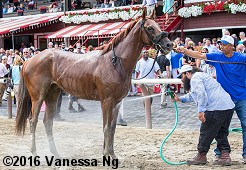 Left: Mind Your Biscuits in the winner's circle. Winning trainer Robert Falcone Jr., celebrating his first graded stakes win, said, "He's a racehorse. He loves his job. This [win] means a lot. I'm just happy to be here - it's the greatest horses, the best trainers and the best jockeys, it's just great. But to win on a day like this is really something. [This win] wasn't really a surprise. We always knew he was a good horse. I think the blinkers on really turned the corner - it really was the finishing touches for him. He matured a lot, too, since he has been in my barn. Every race he would run, he would come back and mature more.

Right: Mind Your Biscuits get hosed off after the race. Winning jockey Joel Rosario said, "For a second I thought the horse in front wanted to stay there but I took the chance to get inside and it worked. He is very, very nice horse and I'm very happy with him today." 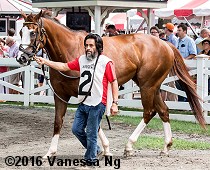 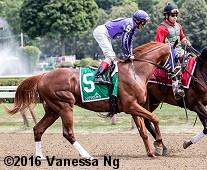 Left: Second place finisher and beaten favorite Maniacal in the paddock before the race. He improved his record to 2 wins and 2 seconds in 4 starts, earning $140,000 for owner-breeder and trainer Wesley Ward.