The $500,000 Joe Hirsch Turf Classic Stakes (G1) is a "Win and You're In" qualifier for the Breeders' Cup Turf. A field of 11 older horses contested this 1 1/2 mile trip around 2 turns of Belmont Park's Widener Turf Course under partly cloudy skies and temperatures in the low 60's. Sadler's Joy was the 7-2 favorite off his win in the Sword Dancer (G1). In to challenge him included 15-4 second choice Oscar Performance, winner of the Belmont Derby (G1) and the Secretariat (G1), and 9-2 third choice Money Multiplier, winner of the Monmouth Stakes (G2) but 2nd in the Sword Dancer.

Jockey Eric Cancel sent 147-1 longest shot Converge to the front first time by through fractions of 23.81, 48.23, 1:13.81, and 1:39.55 while pressed by 5-1 Beach Patrol and stalked by Oscar Performance. On the far turn Converge gave way allowing Beach Patrol to inherit the lead through 10f in 2:03.44. Kept to task by Joel Rosario, Beach Patrol drew off late to win by 5 lengths over late-running 9-1 Fanciful Angel in 2:26.29 over the firm going. It was a nose back to Oscar Performance third, and a length more to favorite Sadler's Joy fourth. 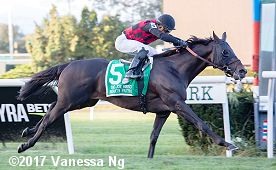 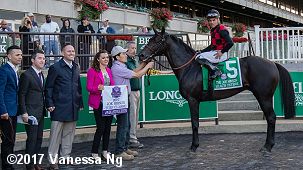 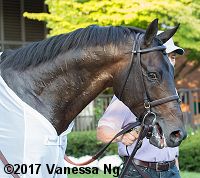 Left: Beach Patrol in the winner's circle. Winning trainer Chad Brown said, "This horse has really gotten some unfavorable trips early in the year. He really is one of the most consistent horses I've had in training. He was very unlucky in some spots and Joel has fit him very well. He's gotten to know this horse, in particular in his last two starts. He's really found some good chemistry. He's a tricky horse to ride out of the gate. He doesn't really break well, so you have to walk that line between encouraging him the first portion of the race to get position, but then switching him off which is not easy to do. He's a classy horse and Joel gets along with him well. I think their relationship has a lot to do with how this horse has developed in the second half of the year."

Right: Beach Patrol heads back to the barn after the race. Winning jockey Joel Rosario said, "He just keeps moving forward and then turning for home, I could see he wasn't going to quit on you. He gives you everything he has. When I went to let him know it's time to go and he accelerated himself. It was a really good performance. I thought we would probably follow Jose [Ortiz, aboard Oscar Performance], but it looked like someone else was going to show speed, so I just stayed by them. I stuck to my spot and tried to follow the horse in front of me and take my time." 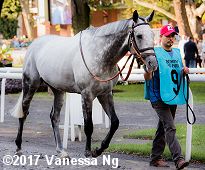 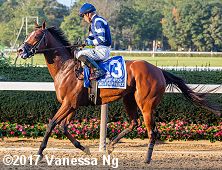 Left: Second place finisher and beaten favorite Fanciful Angel in the paddock before the race. Jockey Irad Ortiz Jr. said, "Man, he was tough. He was keen the whole way. He's a tough horse, it's his first time in the country. But Bradley [Weisbord], one of the managers who buys horses for Sol [Kumin] and all of those owners, he told me the horse knows something so I was ready for that. But he was tough the whole way, he never gave me a break. I don't really get nervous with horses who are racing at Belmont for the first time. Chad does a good job with them."

Right: Third place finisher Oscar Performance returns after the race. Trainer Brian Lynch said, "The whole concept of the race changes when you have the rabbit in there. I was happy with his performance. Unfortunately, we didn't hang on for second, but we got beat by the 1-2 finishers in the Arlington Million. It probably wasn't the ideal scenario the way the race fell into play, but it is what it is and you got to play the cards that are dealt to you. Overall I think he handled elders well, and he was just unlucky he didn't hang on for second." 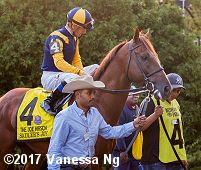 Fourth place finisher and beaten favorite Sadler's Joy in heads out fo the the paddock before the race. The 7-2 choice was last early under Julien Leparoux then rallied 7 wide to finish 4th beaten 6 lengths. The Tom Albertrani trainee has a record of 5 wins, 1 second, and 3 thirds in 13 starts, earning $1,027,968 for owner-breeder Woodslane Farm. 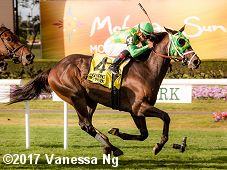 The $200,000 Pilgrim Stakes (G3) is not a Challenge race but is a useful prep for the Breeders' Cup Juvenile Turf as it features 2-year-olds going 1 1/16 miles on the inner turf. Belmon Park debut winner Voting Control was the 6-5 favorite in the field of 8 over 2-1 Maraud, a debut winner at Saratoga, and 5-1 Seabhac, still a maiden but 4th in the With Anticipation (G3) last out. 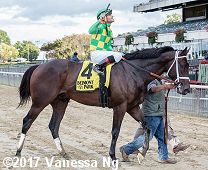 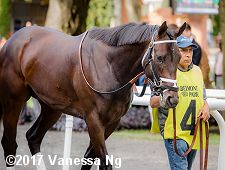 Left: Seabhac heads to the winner's circle. Winning trainer Todd Pletcher said, "We were hoping he would break a little more alert and put himself in a good spot. If you watch the replay of the With Anticipation, he got stopped pretty hard at the quarter pole and it was kind of an impossible spot to rally from, but he still closed well. Johnny (Velazquez, who rode him in that start) just said if we use blinkers, he should have a little more confidence, and he was right. To be honest, the original plan was to go to Keeneland, so I had Johnny committed to [Maraud] already, so we started investigating races at Keeneland but we didn't think we could get in because he was still a maiden. I felt bad for Johnny because he had ridden the horse twice, and like I said, it was his idea to put the blinkers on him. It's just one of those things.""

Right: Seabhac in the paddock before the race. Winning jockey Luis Saez said, "It was just a good trip. It was pretty exciting. He broke pretty good. He was right there, and when I asked him at the three-eighths, he just took off. When he came into the stretch he was running. I can't wait to ride him next time." 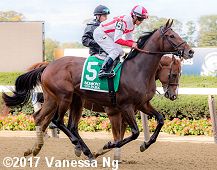 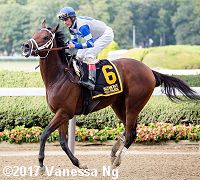 Left: Second place finisher and beaten favorite Voting Control in the post parade. Trainer Chad Brown said, "The horse ran great. It looks like he was further back than he wanted to be and he just missed at the wire. It was one of those things where he lost position early in the race, at the start. I think he lost the race right there."

Right: Third place finisher Maraud returns after the race. Trainer Todd Pletcher said, "I thought Maraud had a chance [at about the eighth pole], Johnny said the ground was slipping away from him a little bit when he really had to turn him loose and ask him. But I thought for his second start it was a good effort as well."