The $500,000 Joe Hirsch Turf Classic Stakes (G1) is a "Win and You're In" qualifier for the Breeders' Cup Turf. A short field of just 4 older horses contested this 1 1/2 mile trip around 2 turns of Belmont Park's Widener Turf Course under overcast skies and temperatures in the low 60's. Flintshire was the 1-5 favorite off a 3 race win streak including the Manhattan (G1), Bowling Green (G2) and Sword Dancer (G1). In to challenge him were 7-2 second choice Money Multiplier, second in the Man O'War (G1) and Sword Dancer, 9-1 third choice Ectot, 2nd in an allowance last out and winless since the 2014 Prix Niel (G2) at Longchamp, and 11-1 Twilight Eclipse, third in this race last year as well as in the Sword Dancer last out. 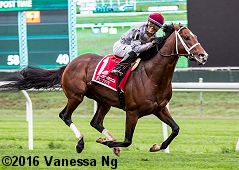 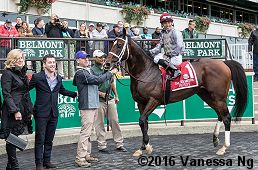 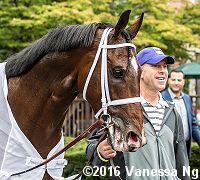 Left: Ectot in the winner's circle. Winning trainer Todd Pletcher said, "We thought it would help when it rained. We felt we had a lot going for us, but you still have to have tremendous respect for a horse like Flintshire, who is accomplished and for what he's done in his career. We were optimistic that our horse would run well and we couldn't be more pleased with the way he did it. Somewhere between the 3/8 pole and the 1/4 pole, it looked like it was coming along the right way. You're just wondering if Flintshire is going to have that big acceleration he's had before. By the 1/8 pole, I thought, 'we might have it from here.'"

Right: Ectot in the paddock before the race. Winning jockey Jose Ortiz said, "My strategy was to go to the lead and slow down but my horse is a little strong in the early stages. So, I just needed to break and try to relax him. When we got to the backside, he relaxed very well for me. When I passed the 3/8 pole, I looked and I saw Twilight Eclipse three lengths behind me and I saw Flintshire in the clear, so I still had to run to win." 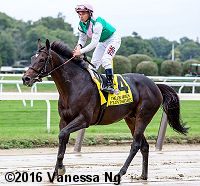 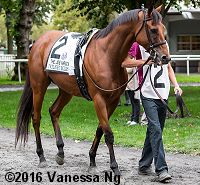 Left: Second place finisher and beaten favorite Flintshire returns after the race. Trainer Chad Brown said, "He didn't handle the ground. We knew the risk going into the race running on soft ground. He has a poor record on it. I didn't see another option; I didn't feel comfortable going into the Breeders' Cup without a prep. So, we gave it a shot and it didn't work out. Hopefully he'll come out of the race sound and will get a chance to redeem himself in the Breeders' Cup on firm ground."

Right: Third place finisher Twilight Eclipse in the paddock before the race. The Tom Albertrani trainee improved his record to 8 wins, 5 seconds, and 11 thirds in 36 starts, earning $2,091,653 for owner West Point Thoroughbreds. 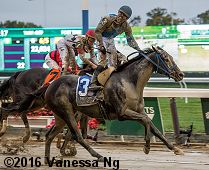 The $400,000 Vosburgh Stakes (G1) is a "Win and You're In" qualifier for the Breeders' Cup Sprint. A field of 7 older horses contested this 6 furlong main track event, with X Y Jet sent off as the 6-5 favorite, unraced since a close second in the Dubai Golden Shaheen (G1) after winning the Gulfstream Sprint (G3). In to challenge him included 13-4 second choice Holy Boss, second in the A.G. Vanderbilt (G1) after finishing third in the True North (G2), and 4-1 third choice Joking, winner of the True North.

Jockey Emisael Jaramillo sent X Y Jet to the lead down the backstretch through fractions of 21.59 and 44.12 while pressed by 57-1 longest shot Green Gratto and stalked by 8-1 Weekend Hideaway. Entering the lane 7-1 Stallwalkin' Dude, 5th early, moved up to take over the lead through 5/8 in 56.38. However, Joking, 6th early, came out 6 wide for room under Manny Franco and rallied to win by a length in 1:09.18. It was another length back to Weekend Hideaway third, while favorite X Y Jet tired to finish 5th. 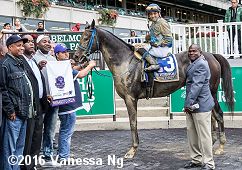 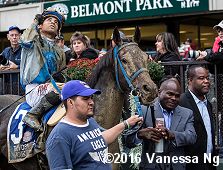 Left: Joking takes his walk down Victory Lane. Winning trainer Charlton Baker said, "He's definitely matured with age. He used to be a horse that was always jittery. He would get all sweaty but he's gotten calmer as he's gotten older. I had watched him for most of his career and when he ran for $50,000 I thought about him but when he got down to my price range in $20,000, thankfully we were able to get him. He was always going to get a layoff for Saratoga. The timing just worked out good to give him that time off. I actually wanted to run him in the Belmont Sprint because I think 7f is his best distance, but unfortunately it didn't work out but we were able to come back for this race and it worked out great."

Right: Joking in the winner's circle. Winning jockey Manny Franco, celebrating his first Grade 1 said, "I rode him like I always do. I just let him go on his own, sit in the back and make one move when I think it's the right time. Charlie said to ride him like I want. I know the horse and I get along with him. When he got in the clear, he gave me a big kick, like always. That's normal for him, when he gets clear, he just wants to run." 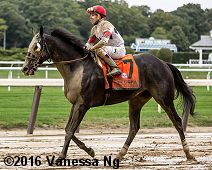 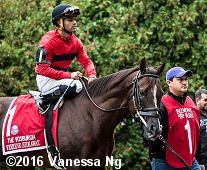 Right: Third place finisher Weekend Hideaway heads out of the paddock. The Phil Serpe trainee improved his record to 11 wins, 4 seconds, and 5 thirds in 34 starts, earning $842,532 for owner Red and Black Stable. 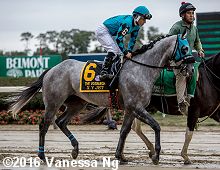 Fifth place finisher and beaten favorite X Y Jet in the post parade. The Jorge Navarro trainee has a record of 6 wins, 6 seconds, and 1 thirds in 16 starts, earning $776,153 for owners Gary Hartunian and Ivan Rodriguez. 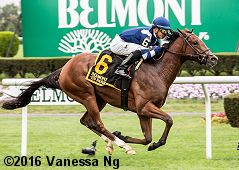 The $200,000 Pilgrim Stakes (G3) is not a Challenge race but is a useful prep for the Breeders' Cup Juvenile Turf as it features 2-year-olds going 1 1/16 miles on the inner turf. Oscar Performance was sent off as the 8-5 favorite in the field of 8 off his 10 1/4 length romp at second asking in a maiden at Saratoga. In to challenge him included 11-4 second choice Oiseau de Guerre, a close second in his debut last out, and 6-1 third choice J.S. Choice, winner of a maiden last out in his 2nd start.

Jockey Jose Ortiz sent Oscar Performance to the front on the clubhouse turn through fractions of 23.55, 48.98, and 1:12.63 over the yielding going while pressed by 7-1 My Bo Chop and stalked by 13-1 Sir Douglas. At the top of the stretch Oscar Performance pulled away from the rest of the field through 1 mile in 1:36.60. Kept to task by Ortiz, Oscar Performance drew off to a 6 length win over late-running J.S. Choice in 1:42.88. It was another 3/4 length back to 7-1 Kitten's Cat third. 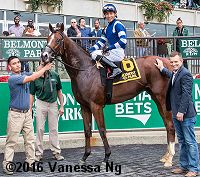 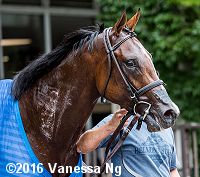 Left: Oscar Performance in the winner's circle. Winning trainer Brian Lynch said, "You hope that he wasn't going to get pressured. Today, he got a nice first quarter and then he was able to relax. When I saw the second-quarter come up 48-and-change for the half, I knew he found his stride and he's just comfortable going and he'd be hard to catch from there. I didn't think the cut in the ground would be a big deal. As long as it's on turf, he could handle whatever you throw at him. I think it was a decent field behind him, so there's plenty to look forward to. I'd certainly say he's on the wagon headed (to the Breeders' Cup)."

Right: Oscar Performance heads back to the barn after the race. Winning jockey Jose Ortiz said, "He broke his maiden on the lead. I was a little worried about the other two speeds in the race, but I did my planning, and that was to break well and see what happens. As soon as he took the lead, he relaxed very well. I didn't push him a lot today. When we entered the stretch, I knew that I was going to open up and that I had a lot of horse. He started playing a little, so I had to crack and ride. When I hit him left handed, he took off." 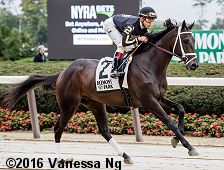 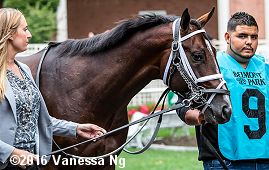 Right: Third place finisher Kitten's Cat in the paddock before the race. The Joe Sharp trainee improved his record to 1 win and 2 thirds in 3 starts, earning $101,800 for owner-breeder Ken and Sarah Ramsey.