The highlight of the Belmont Park Fall Championship Meeting is the $750,000 Jockey Club Gold Cup (G1), a "Win and You're In" qualifier for the Breeders' Cup Classic, contested at the Classic distance of 1 1/4 miles on the main track. Conditions were excellent for early October, with partly cloudy skies and temperatures in the mid 70's at the historic Long Island facility, with a fast main track and the turf courses rated yielding. Defending champion Diversify was sent off as the 3-5 favorite in the field of 8 off wins in the Commentator, Suburban (G2), and Whitney (G1), over 4-1 Mendelssohn, 2nd in the Travers (G1), and 11-2 Gronkowski, 2nd in the Belmont (G1) but 8th in the Travers.

Jockey Irad Ortiz Jr. sent Diversify to the front through fractions of 22.72, 45.64, 1:09.13, and 1:33.89 while pressed by Mendelssohn and stalked by 13-2 fourth choice Thunder Snow. Entering the stretch Diversify tired allowing Mendelssohn to inherit the lead. However, 45-1 longshot Discreet Lover, 5th early and 15 lengths out under Manuel Franco, came out 6 wide for room and rallied to outfinish Thunder Snow by a neck in 1:59.99. It was another 1 3/4 lengths back to Mendelssohn third, while Diversify checked in 5th. 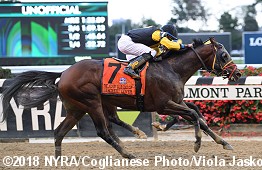 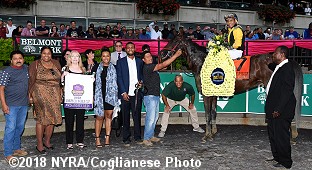 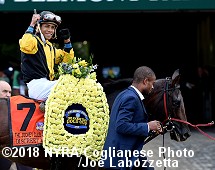 Left: Discreet Lover in the winner's circle. Winning owner-trainer Uriah St. Lewis said, "It's the first Grade 1 for the horse and myself. He did it all. All I want to do is go cash my ticket. He can come flying. The wire came right when we wanted it to come. It was great. But I want to go back and spend some time with him. Let's see how he comes out of it, and then we'll go from there. One step at a time. But everything is paid for [for the Breeders' Cup], so we don't have to worry."

Right: Discreet Lover after the race with his flowers. Winning jockey Manuel Franco said, "This horse always gives me all he has. I knew I had a lot of horse under me. I was hoping they would come back to me and they did. I just need to get there one day and today was the day. He always hits the board. I'm excited for the Breeders' Cup. I know he's going to give me his all, like always."

The $500,000 Joe Hirsch Turf Classic Stakes (G1) is a "Win and You're In" qualifier for the Breeders' Cup Turf. A field of 7 older horses contested this 1 1/2 mile trip around 2 turns of Belmont Park's Widener Turf Course. Arlington Million (G1) winner Robert Bruce was sent off as the 6-5 favorite over 4-1 Carrick, winner of the Secretariat (G1), and 5-1 Channel Maker, 2nd in the Sword Dancer (G1). 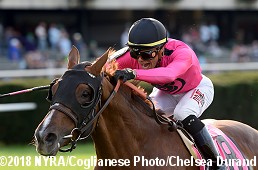 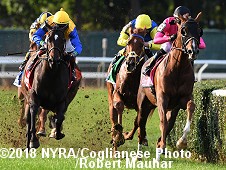 Left: Channel Maker at the finish from the inside. Winning trainer Bill Mott said, "I thought he went into the first turn good, but Ryan Moore [aboard Teodoro] went up and joined him. He's no green hand, I think he probably knew they were going easy enough, but his horse didn't stay on. He's got a little different running style [from last year]. Even the last two or three times, he's always broke and been back; he's never gotten away cleanly enough to be up on the lead. But, the last couple times, he's been breaking better. A horse couldn't be doing better than he's been doing. I don't know if he can stay this good for another four or five weeks. But he's just gotten better and better since we had those two runs at Saratoga. He's been hard to hold on the ground. Put it this way, he needed to run.

Right: Channel Maker leads as they make the final turn. Winning jockey Jose Ortiz said,  "He was relaxed the whole way around. He had been running well the last three races. He wants to be on the lead. He doesn't want a big hold taken of him. I think they found the right thing. They told me today to try to be on the lead and slow it down, and that's what I did. Bill is a great trainer. He was 100 percent ready, and when I asked him he took off. At the 3/8 pole, he was still pricking his ears, waiting for somebody to come. When we left [Teodoro], he was waiting for somebody to come and no one came. When I asked him to go, he responded beautifully."


Kicking off the stakes quartet was the $350,000 Vosburgh Stakes (G1) for older horses sprinting 6 furlongs looking for automatic entry into the Breeders' Cup Sprint. True North (G2) and A.G. Vanderbilt (G1) winner Imperial Hint was the 1-5 favorite in the field of 7 over 11-2 Still Krz, winner of his last 2 but in claiming company, and 12-1 Mr. Crow, 5th in the Tale of the Cat after finishing 4th in the Vanderbilt. 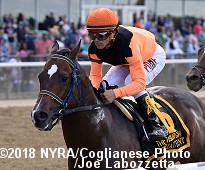 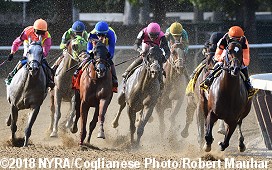 Left: Imperial Hint at the finish from the inside. Winning trainer Luis Carvajal Jr. said, "We wanted to try to get an easy race before the Breeders' Cup as a prep, because you don't really want to go into that race having to run really hard and I was happy the way the field for this race came out. You always worry, especially when you're 1-5, 1-9, but the way he did it was good. I was a little worried at the end, hoping that Javier didn't hold him back too much, but the track is fast, and I couldn't ask for anything else from this little horse he was great. I think 3/4 is his game. We'll see how he comes out of this race, but we'll most likely ship to Kentucky 10 days before the race."

Right: Imperial Hint leads as they make the final turn. Winning jockey Javier Castellano said,  "He's a very nice horse. You can do whatever you think; you can go to the lead, or come off the pace a little bit. Today, I felt he was the fastest horse. I tried to dictate the pace and control the race. He's a special horse. We were looking for a little workout and looking for the big picture, the Breeders' Cup." 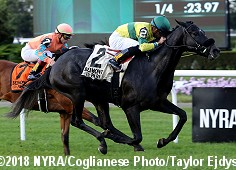 The $200,000 Pilgrim Stakes (G3) is not a Challenge race but is a useful prep for the Breeders' Cup Juvenile Turf as it features 2-year-olds going 1 1/16 miles on the inner turf. With Anticipation (G3) winner Opry was the 9-5 favorite in the field of 10 over 4-1 Forty Under, a maiden winner last out, and 9-2 Somelikeithotbrown, 2nd in the With Anticipation. 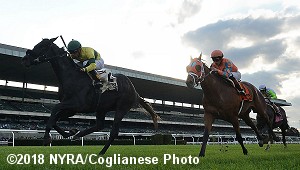 Winning trainer Jeremiah Englehart said, "One advantage he has even on the softer turf, he's not a real big thick horse. He's slender, good size, but still pretty sleek, not a big horse. Even on the turf, you want to be in that first tier [because] you don't know how they're going to handle everything in the back. We were going to be forwardly placed. We had the inside from where we were [but] you want to be out and you don't want to be shuffled back. He backed him off the horse and Manny made the right adjustments to win the race."

Winning jockey Manuel Franco said, "I expected to be closer to the pace, but the horse broke a step slow, so I used plan B, stay inside, save some ground and wait for the moment. He's a different horse on turf. He loves it. (After his debut race), I told the trainer, put him on the grass. That's what we did and he won at Saratoga."